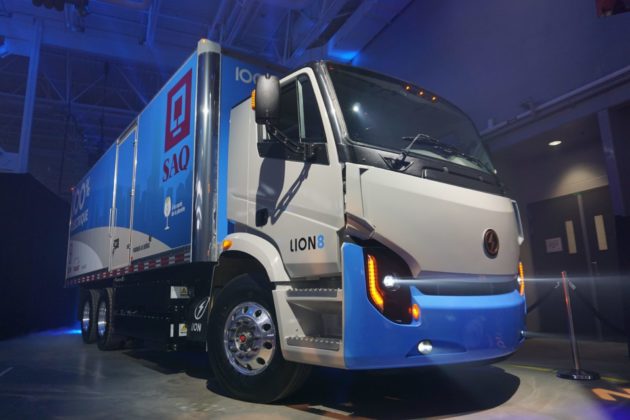 TORONTO, Ont. — With the economic fallout from Covid-19 draining government resources at a record pace, will there be anything left when the crisis is over to spur the e-mobility ecosystem? Canadians haven’t seen incentive programs for electric trucks of the scope seen in California in the pre-Covid-19 days, but there is reason to believe that any government money pumped into the recovery could be directed toward green technologies.

“Governments are spending a lot of lifesaving money as we speak, and they will eventually have to restart the economy,” says Yves Provencher, director of business development at Lion Electric. He was sharing his own thoughts, not necessarily those of the company. “I think that the expression ‘balanced budget’ will disappear for quite a few years, but money will flow to job creation like crazy when this is over. I’m are very confident that major government economic investments will go toward the ‘new economy’ with electric vehicles in the mix.”

Funding of incentive programs in states like California that have defined programs and target dates for zero-emission transport will probably not be negatively impacted by money going to Covid-19 relief measures, says Rick Mihelic, director of future technologies at the North American Council for Freight Efficiency (NACFE).

“More than likely, it may accelerate some planning on where and how to spend for zero emission progress, especially those economically distressed areas that are already identified as areas for more investment in zero emission improvements,” he says. “The immediate impact of Covid-19 on battery electric vehicle adoption in California is some delays in hardware deliveries and construction projects due to supply chain closures and social distancing directives. Those delays may last a few weeks or months, but things will return to normal soon enough.”

Mihelic wondered what would happen to the electric vehicle incentive programs when California electric utility PG&E declared bankruptcy. “That was long before Covid-19, but the answer I got back then was that none of the state or local programs would be impacted by the bankruptcy,” he says.

He doesn’t expect things to be any different in California now under the current economic crisis, but the picture at the federal level is less clear.

“Properly crafted stimulus funding now or low interest rates brought about by pumping $2 trillion-plus into the economy may expedite investment in infrastructure by utilities, shippers, fleets and OEMs, but there’s nothing on paper yet,” he said.

He pointed to the massive impact the infusion of billions of dollars of Volkswagen’s diesel-gate money had on accelerating electric vehicle infrastructure investment and industry focus on vehicle development. And to the wins that came from job incentive programs such as the 2009 Department of Energy SuperTruck program, born out of the “Great Recession.”

“That proved hugely beneficial to OEMs and fleets in getting significantly better aerodynamics and fuel economy into current diesel trucks,” he says. “Similar wise use of stimulus funding might reap acceleration in cost reduction of production components of [commercial battery-electric vehicles] like batteries and motors.”

Canada, for the most part, has lagged behind the U.S. in funding and incentives for electric vehicles, especially commercial vehicles, but Provencher hopes that will change in the post-Covid-19 days.

“Some governments were reluctant, in the pre-coronavirus era, to spend lots of money on Climate Change and GHG-reduction initiatives, but they should consider that if they are going to spend a lot of money to restart the economy, why not invest it where you can kill two birds with one stone? Save the planet and create more sustainable jobs.”