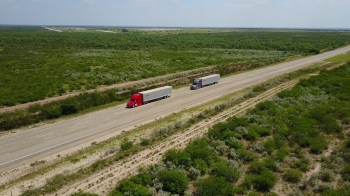 Tightly spaced pairs of trucks are now running in controlled trips along Oregon and Nevada highways. And coordinated braking tests are being completed at the company’s High Desert Proving Grounds in Madras, Oregon. A fleet trial is expected early next year, the company adds.

It’s hardly Daimler’s first foray into autonomous technologies. In 2015 the Freightliner Inspiration Truck became the first automated commercial truck to be licensed to operate on an open public highway in Nevada.

The fuel economy benefits of platooning are realized by improving aerodynamic drag, using vehicle-to-vehicle communications to coordinate braking and speed between paired trucks.

The following distances are tighter than would normally be considered safe, but the automated braking responds in about 0.2-0.3 seconds – much faster than a driver would be able to respond on their own.

He has personally driven the new Cascadia under platooning conditions using this technology. “To be sure, the platooning technology is not meant to replace drivers – it’s designed to help drivers,” he stressed. “If we can help relieve drivers while they are on highways, they will likely become less fatigued.”

“When America is ready for platooning, DTNA will have a proven, viable solution,” he told a crowd of customers and media at the inaugural North American Commercial Vehicle Show.