Drivers are at front and center of Jobs Expo

September 3, 2019
Focus of the job fair will be on drivers

TORONTO, Ont. – Bigger and better. That is what the organizers say about next weekend’s Roads Today-Truck News Jobs Expo in Mississauga, Ont.

The event, which is aimed at meeting the hiring needs of Canada’s growing trucking industry, will be held Sept. 14 at the International Centre.

It is being organized by Newcom South Asian Media Co., a division of Newcom Media, the publisher of Truck News.

“The Jobs Expo has become the most sought-after hiring event for employers as well as job seekers serving the trucking and logistics sector,” said Manan Gupta, general manager of Newcom South Asian Media.

“With a galaxy of industry leading companies in attendance looking to fill jobs, there will be ample opportunities to learn, network and get hired as well.”

The show builds on the success of the inaugural expo held in September 2018 and the spring edition in April 2019, Gupta said.

Nearly 100 exhibitors will be in attendance, representing Canada’s best-known fleets and service providers from allied sectors.

Once again, the focus of the job fair will be on drivers.

The North American trucking industry is reeling under a severe shortage of drivers. In Canada, the sector is estimated to face a deficit of close to 50,000 drivers by the end of 2024. 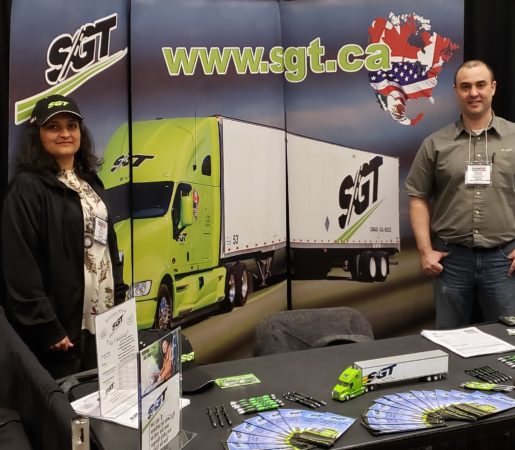 Neha Bhatia with Sevket Gokce, driver trainer and recruiter at SGT, at the April show.

“In today’s scenario with extreme driver shortage, I would rather say qualified drivers’ shortage, job expos like the RTTN are of much help,” said Neha Bhatia, a recruiter at SGT Transport.

The Brampton, Ont.-based company has been participating in the show since its inception.

“It would again be a great platform for companies to connect with the qualified workforce and vice versa,” said Bhatia.

Trucking HR Canada, which promotes collaboration among the stakeholders in the trucking industry, will also be back at the show.

“We participate in the Jobs Expo as we find it is a great opportunity to connect with industry employers and future employees alike,” said Angela Splinter, CEO of Trucking HR Canada.

The Ministry of Transportation as well as the Ontario Provincial Police will also participate.

Admission and parking are free.