YOUNTVILLE, Calif. – Come October buyers will be able to buy a four-cylinder Freightliner M2 106 truck. Daimler Trucks North America (DTNA) chose California wine country to make the announcement that its Detroit DD5 engine will soon be ready to roll. A six-cylinder DD8 will arrive in 2018. 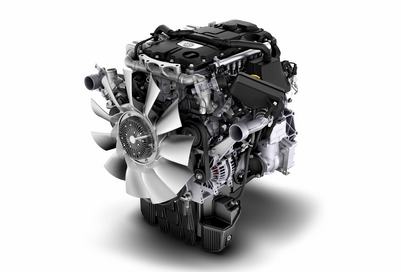 The pickup-and-delivery world is the company’s first market target with the DD5, which shares some design principles and elements with its larger DD13, DD15, and DD16 brethren. That includes diagnostic and connectivity features as well as hardware.

The DD5 will offer customers a number of benefits over competitive engines, DTNA promises. One prime example is best-in-class scheduled maintenance intervals — for short-haul P & D applications buyers will enjoy extended oil and fuel-filter change intervals up to 45,000 miles (72,420 km). For severe-duty work that will drop to a still respectable 35,000 miles (56,325 km) and for easier highway work it will rise to 50,000 miles (80,470 km).

The engine has undergone extensive development and testing in preparation for release — like three million miles in a 12-truck test fleet — and boasts impressive durability with an expected B10 life of 400,000 miles (about 643,750 km) . That means 10% of DD5 engines will require an overhaul by that distance travelled.

The engine will first be offered in two ratings — 210 hp and 575 lb ft of torque, and another at 230/660. Testing, says Detroit, has proven that the DD5 will provide best-in-class fuel efficiency — 3% better than the closest competitor, with more to come in the near future.

DD5 customers will get the Detroit Connect Virtual Technician remote diagnostics system, as used by heavy-duty customers use to make service decisions that minimize downtime.

“As a testament to our confidence in the DD5, I am excited to announce we are backing it with a 3-year/250,000-mile engine and aftertreatment system warranty,” said Kary Schaefer, newly installed as DTNA’s general manager, marketing and strategy.

The 5.1-liter DD5 engine uses common design principles found on the heavy-duty platform such as a deep-rib block that provides strength and minimizes noise.  The engine also introduces some leading-edge technologies of its own such as variable cam phasing — which offers the ability to optimize thermal management under low engine load conditions and improve the overall performance of the aftertreatment system. This is a key benefit to keeping customers up and running  in the P & D  segment where low-load stop-and-go operating conditions mean it’s hard to keep operating temperatures high.

The DD5 should also be a good fit for a number of vocational applications, though that will have to wait until later in 2018 when power-take-off options stronger horsepower ratings  are offered.

The engine’s use within the DTNA lineup will expand in 2018 as production of the DD5 shifts from Mannheim, Germany to its powertrain facility in Detroit, where an investment of US$375 million is getting things ready. 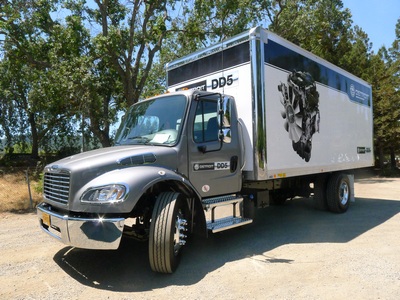 Detroit has received EPA certification for the new DD5, to meet 2017 greenhouse-gas and fuel-efficiency standards as well as all on-board diagnostic and near-zero criteria pollutant standards.

While it was a short 15-20-mile trip, my test drive — in an M2 106 with a 230-horse DD5, albeit unloaded — showed a willing engine with sprightly performance. You’d be hard pressed to tell that it was a four-cylinder motor, the first so far in a conventional-cab medium-duty truck.