TORONTO, Ont. — There’s no such thing as one-size-fits-all in the medium-duty truck domain. You can install a body of any description on just about any chassis, provided it is compatible and engineered for the purpose. Users of the equipment range from landscapers with dump boxes to mobile heavy-duty service technicians with service bodies, and tow truck operators with the flatbeds or cradle snatcher bodies, or utility companies with cranes and booms. We probably missed a few hundred applications in there, too. It’s a busy sector.

In that crowd you’ll find a huge spread in the level of knowledge and understanding of the mechanics and physics of truck spec’ing and bodybuilding.

The process of spec’ing a body for any application needs begin with the truck, though. Steve Kinnunen, president of SK Power Drive in Sudbury, Ont. gets lots of calls from potential customers looking to install snow plows on pickup trucks.

“It’s not as simple as it sounds,” he cautions. “A customer will buy a truck that he or she really likes and come in here asking us to install a big V-blade plow. It might be a 3/4-ton or even a one-ton with a diesel. Then I have to explain to them that the diesel engine makes the front end too heavy for the plow. A gasoline engine would have been fine for the job and we could have installed the heavier plow.”

Kinnunen says a customer first needs to identify the work they want to do with the truck, and be very specific about it. A common mistake in spec’ing dump bodies, for example, is ordering a truck with single rear wheels, when the job requires duals. You need to know how much weight you’ll be hauling — there’s a big difference between a load of leaves with an aluminum body, and a load of gravel in a steel body.

“We have three dump bodies sitting out back right now that were ordered incorrectly by a customer,” he says. “My rule of thumb now is not to order anything, especially a custom-build body, until I have the chassis dealer’s build sheet in hand.”

Andy MacDonald of Nobel Truck Bodies in Shallow Lake, Ont. has had similar experiences. He recalls a customer who spec’d a job for a Dodge chassis, but the order was canceled and replaced by an Isuzu chassis. They’re different animals.

“It wouldn’t have made a really big difference if the customer has switched from Dodge to Ford, for example, but they switched to something completely different,” he says. “The cab heights are higher, and the frames are different as well.”

The cab-to-axle (CA) measurement is critical as well. Typically, these are 60 or 84 inches for service bodies and the like, and obviously the chassis builder and bodybuilder need to be on the same page. This where the customer has to do a little footwork.

“I find that most buyers do not know all the details of what they are buying, or even some of the optional equipment that’s available.” Kinnunen says. “When it comes to auxiliary equipment like tool boxes or generators, I have to talk them through all of that. And then we have to talk to the truck dealer about the technical spec’s of the chassis to make sure it will all fit and sit in right location on the chassis. There are a number of standard configurations that will work in most instances, but if we don’t ask, we can get stung.”

Over at Wilcox Bodies in Milton, Ont., the process begins with a conversation to determine what a customer wants, or if there’s any special equipment involved. Sales manager Albert Ribeiro has drawings on hand to illustrate the placement of things like shelves, attachment points, places for additional storage, and clearance for cabling.

“Once the body is approved, I can recommend a chassis, and send them out shopping for a truck,” Ribeiro says. “If the customer wants something like a crane or a liftgate, we’ll need to think about a PTO, or access to the battery, or additional batteries for the device.”

Chassis real estate can be a problem on some of the bigger jobs, particularly where frame-mounted equipment is concerned. Additional fuel tanks are sometimes requested, as are storage boxes, but there’s a finite amount of space.

“The more equipment you have on the truck, the more complex it gets,” Ribeiro says. “Those extra items have to be engineered before they are built, so we make 3-D drawings of everything to be sure it will all fit.”

Occasionally, upfitters get orders for trucks with alternate fuels such as propane, so placement of the tanks and the fill points have to be considered, but that’s all in a day’s work for a quality upfitter. “We have done electric and propane conversion and it doesn’t change much on the body other than the fuel fill points,” he says.

There’s one final word to the wise for truck buyers — understand the power requirements for the truck you’re building, and check the warranties.

“The truck dealer will always advise you on any special engine or powertrain requirements if you’re planning to haul heavy, or run off-road or something unusual,” says MacDonald. “If you’re bringing your own truck in or a used truck, make sure it’s up to the task, and make sure installing any equipment won’t void any of your warranties. Many of the snow plow makers have compatibility charts so you know in advance what will work.”

Ribeiro tries to get his customers to visit the plant in Milton before a purchase. Often it leads to new ideas.

“Bringing the customer to the facility gives them an idea of what others are doing with their projects,” he says. “That can be an education in itself. It leads ultimately to smarter buyers, and that’s good for everyone.”

When you’re playing with a $60,000-$70,000 chassis — and a piece of equipment that can be that much again — it pays to approach the spec’ing process with eyes wide open. You can buy a snow plow or dump body anywhere, but some expert advice from a reputable upfitter will go a long way to making the business venture successful. 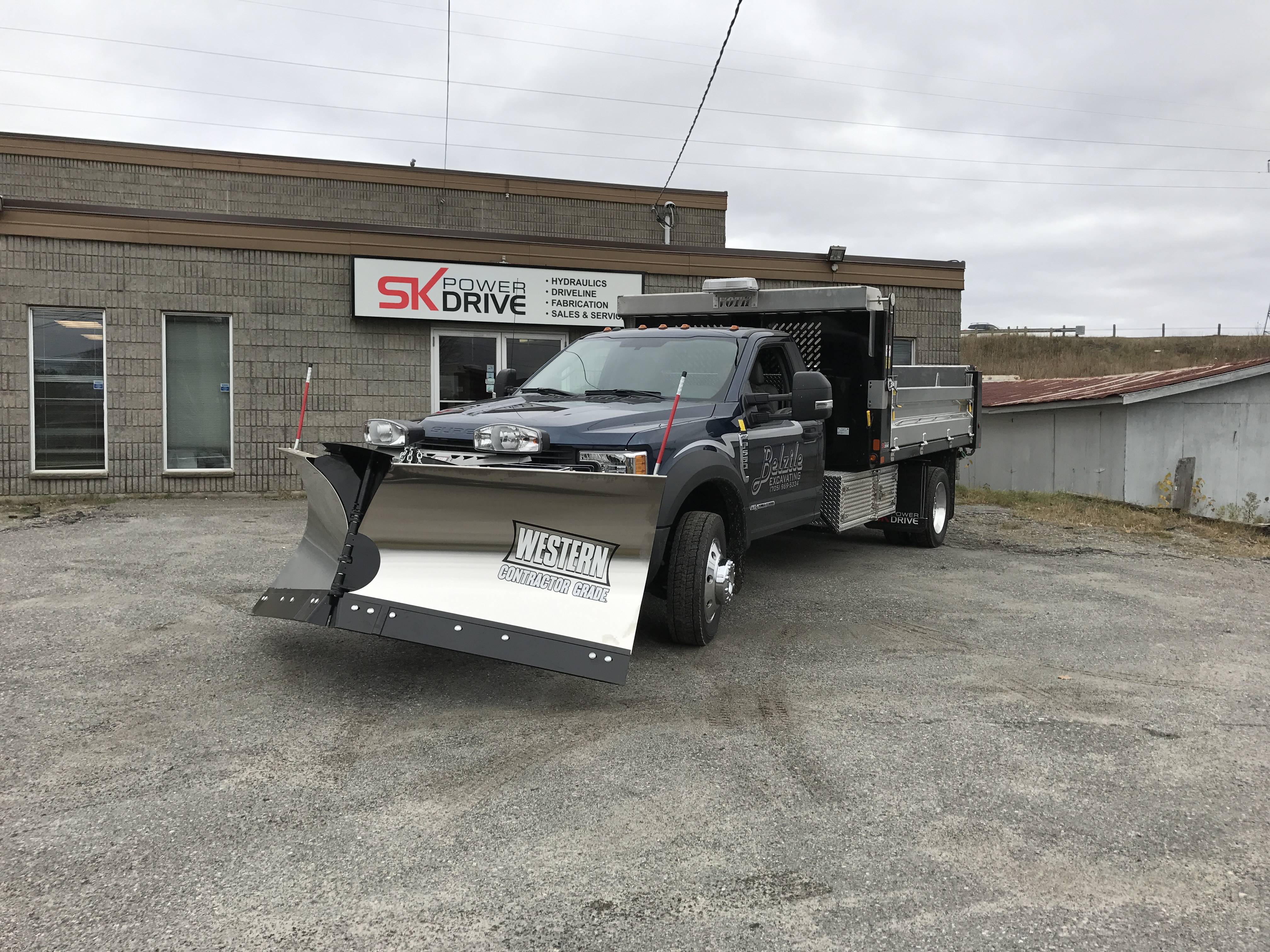 Ever heard the story of the architect who designed a library but forgot to account for the weight of the books? The story has been debunked as an urban legend, says Snopes.com, but there is a current example of just such a thing happening. The 500-year old Vatican Library is sinking unto the ground under the 1.5 million volumes in its collection. Its architect probably never imaged the building would house that many books, or survive 500 years. She can probably be forgiven.

Various transportation departments may not be so forgiving if you’re caught at a scale overloaded or improperly loaded because you thought your truck could handle the weight.

“You can’t do that,” he says with a hearty chuckle. “The truck might be good for 800 pounds, but not 1,000. It’s disturbing to say, though, there are installers who would do that without asking any questions if they could get it to fit.”

The same thinking applies to a landscaper who plans to haul mulch or grass clippings in a dump body. The same truck is probably not rated to haul a load of gravel, but it happens a lot.

Vehicle length and axle space are important considerations, too, and an expert upfitter can help with that. When installing a flatbed towing body, for example, you’ll need a frame long enough to accommodate the cargo, but the rear axle has to be far enough from the cab that an appropriate amount of weight stays on the steering axle.

If you spec’ too short a truck for the length of bed, you’ll have way too much after-frame overhang,” says Albert Ribeiro, sales manager at Wilcox Bodies of Milton, Ont. “That will put too much weight on the back axle, and the front end would be too light and compromise the steering.”

There’s a lot to think about when spec’ing a medium-duty chassis for some specialty applications, and it would be easy to get into trouble without expert guidance.

Cautions Kinnenun: “A shop that will give you anything you ask for might not be the kind of shop you want to deal with.”