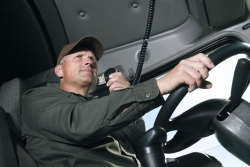 TORONTO, ON – Drivers in Ontario can hang onto their CB radios for a little while longer, thanks to a temporary reprieve from a law that would have permanently silenced the units in the new year.

An Ontario Ministry of Transportation representative says CBs won’t be taken out of cabs until January 1, 2021 – a three-year extension on the earlier January 1, 2018 deadline – to “allow for the development of more viable hands-free technologies.”

As the first jurisdiction to make the wired CB radio illegal in moving vehicles, Ontario said it was doing so because the devices were a dangerous distraction to drivers.

The latest delay is on top of the five-year timeline that was originally introduced to come up with alternatives.

The continued exemption will allow the radios to be used by roadside assistance and service vehicles, taxis, street cars, delivery and courier vehicles, and drivers of construction or commercial motor vehicles. It applies to radios mounted on dashboards or worn on clothing.

After the new exemption expires, the radios will be off limits for everyone except law enforcement officers, firefighters, and provincial offenses officers.

The Ontario Trucking Association (OTA) had been asking for the exemption to be made permanent, or extended for seven years, arguing that CBs still play a crucial role in trucking. With a three-year reprieve in hand, it plans to work on raising awareness about wireless alternatives to CB radios.

This story was updated from a previous version to add additional information from the OTA.