MISSISSAUGA, Ont. — There was a dip in freight volumes last month.

According to TransCore LinkLogistics’ Canadian Freight Index, November showed an 11% decline in volumes versus October 2014. That result, however, was offset by the finding that in a year-to-year comparison, November 2014 volumes were 19% higher than those measured in November 2013. 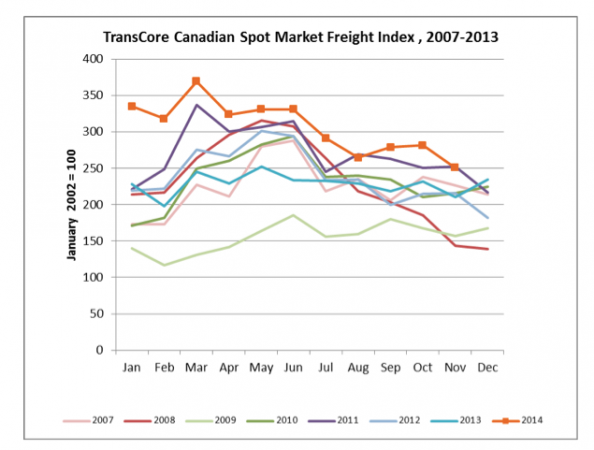 Ontario was the destination for 59% of the of the incoming freight, Western Canada received 22%, Quebec got 17% and 2% went to the Atlantic provinces. The breakdown for incoming equipment was similar with 48% destined for Ontario, 26% headed to Western Canada, 22% going to Quebec and 4% for Atlantic Canada.

Within Canada, loads trucked into Western Canada were up 41% in November, building on a trend that saw a 37% increase in October and a 33% growth in September. Loads moving out of Western Canada were also in the increase, up 48% in November. That follows an October that experienced a 44% increase and a September that was up 43%. Intra-Canada postings accounted for 25% of the loads tracked by TransCore. 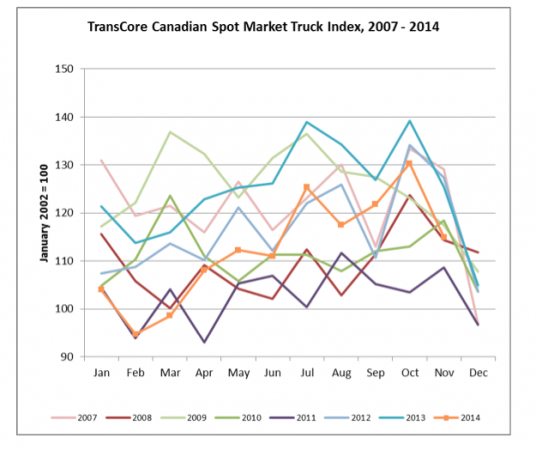 Western Canada originated 48% of the freight, and was the destination for 41%. Ontario sent out 31% and received 34%. A total of 21% of freight ended up in Quebec while 16% started there, while Atlantic Canada was the origin point for 5% and the final destination for 4%.

Equipment postings decreased 12% from October and 8% from November 2013. Dry vans accounted for 52% of the postings, with reefers making up 20%, flatbeds 22% and the remaining 6% being other types of equipment.