MONCTON, NB – The Transportation Club of Moncton celebrated Atlantic Canada’s women in transportation on March 16, naming Midland Transport as Employer of the Year, and Kelly Henderson of THRSC Atlantic as Woman of the Year.

But while gains for the region’s women were celebrated, Angela Splinter of Trucking HR Canada stressed in a keynote address that there is more to do. 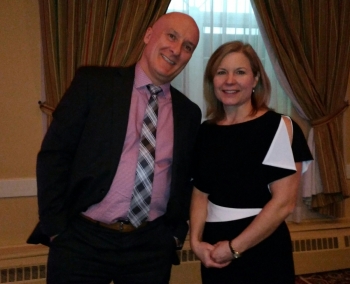 Women account for 48% of Canada’s workforce but just 27% of people who work in transportation. Of those women, 18% are senior managers and 15% are supervisors.  And she asked the crowd how they would react if a young girl in their family came forward and said they wanted to be a truck driver when they grew up.

“We need to change the perception. We need to make it normal for a young woman to consider trucking as a career option,” she said.

Still, Splinter cited industry events such as the gala and Trucking HR Canada’s third-annual Women with Drive summit as strong examples of gains that are being made. Earlier in the week, transportation employers also came together in Vancouver to discuss steps that could be taken to address the shortage of women in their workplaces.

“There needs to be a level playing field for all talent,” Splinter added. “It’s all about the talent.”

To attract more women to roles in transportation, workplace barriers need to fall so employees can rise through ranks regardless of gender, race or ethnicity, she said.

It’s all too easy to blame guidance councillors for not promoting careers, the government for failing to do more, and the media for creating a negative industry image, Splinter added. She called on the industry to focus on solutions, such as finding ways to celebrate positive gains and exploring steps that influence change.

As recently as the early 1980s, women needed men to co-sign loans. New Brunswick gave women the right to vote in 1919, but they couldn’t hold office until 1934. Nova Scotia’s Alexa McDonaugh was the first elected woman to lead a provincial political party in 1980.

Looking to the trucking industry itself, the Atlantic Provinces Trucking Association now has its second female president in a role filled by Vicki McKibbon of Armour Transportation, Splinter said.

Progress takes time, but these examples are proof that gains are being made.