LONDON, Ont. — A prizefighter, looking for a reason to drag himself out of bed at some god-awful hour on a blustery morning to get in his roadwork, might cite for motivation the adage: ‘When I’m not training, my opponent probably is.’

But could anyone have guessed that last Thursday night around 9 p.m., when the sun was setting on an already long day, Home Hardware’s entrants in this weekend’s Ontario Trucking Driving Championships were just wrapping up a marathon six-hour practice session in the company’s yard? Their preparation paid off. 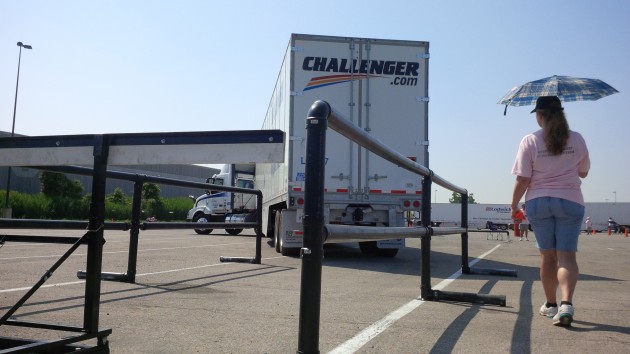 A tractor-trailer is backed between two tightly positioned barriers.

Home Hardware drivers won nine of 22 awards presented at Saturday’s competition, including the Highest Points of the Day and Grand Champion awards, both of which went to Joe Kuntz, winner of the single-single division. Home Hardware drivers will make up three of the five competitors who will go on to represent Team Ontario at the national championships in Regina, Sask. this fall. And none of this was by chance.

“The last couple Saturdays, I was in the yard with my co-workers and they helped me get backed into the alley dock. Backing the shorter trailer, it can get away from you pretty quickly,” recalled Grand Champion Kuntz in an interview with Trucknews.com just moments after learning he’d won. “It took me probably 50 tries to get where I felt I had control of it. We practiced Thursday afternoon for about six hours. The guys I work with were telling me the things I was doing wrong.”

This from a championship veteran; Kuntz is the only driver who has competed in the Central Ontario Truck Driving Championships every year it’s been in existence. Despite the uncertainty he felt just days before the competition, Kuntz said he knew he nailed it when he completed his run Saturday afternoon.

“I did know it,” he said. “I had so much room when I went through the serpentine and offset alley. I cleared the diminishing turns, down to one inch on each side and then I felt really good at the stop sign. I think I nailed every one of them. I’m not bragging – it just went good. It was one of those days where things clicked and I’ve often said, when you’re hot in a tournament, nobody’s going to beat you, and I felt hot today.”

No one was prouder of ‘The Home Team’s’ performance than fleet manager Dennis Shantz, who was there at the awards banquet to support them. 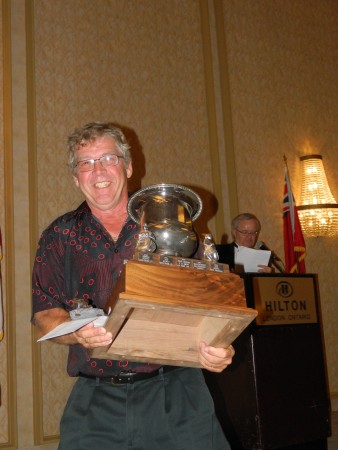 Joe Kuntz was named Grand Champion and winner of the single-single division.

“I’m very proud,” he told Trucknews.com following the awards presentations, amidst an ecstatic group of drivers. “They all worked very hard at it. I couldn’t be more proud of them for their accomplishment. They take it seriously, they coach each other on it and it’s a team effort. They’ll practice in our yard about half a dozen times in preparation for each competition.”

It’s that company support that sets competitors up for success, championship committee president Ewen Steele pointed out in remarks at the banquet.

“They can’t do this alone,” he said. “Employers create the atmosphere from which champions come.”

This year, the competition at the provincials was as fierce as ever. Preetpal Nijjar was the defending national champion in the tandem-tandem division. He was relegated to second spot in this year’s provincials, even though he felt he put together a strong run.

“Today was great. I have a good feeling,” the owner/operator of Flyers Trucking said after his drive. “But it’s getting tougher. There are a lot more drivers coming in. They have good skills and they come with a lot of practice.”

Sebastian Tatar, a driver with Con-Way Freight was one of the relative newcomers, competing for just the second time.

“This is my second year, and I think it’s harder,” he said as the competition was winding down. “Last year, I had no expectations on myself, I just gave it my best. But every time you do something you put yourself one level up and you want to do better. The track always changes. Every year it’s at a different location, so you can’t get used to the track and you never know what to expect. It’s always a little bit different.”

The change in course didn’t seem to bother him one bit; Tatar won the single-tandem division and will represent Team Ontario in Regina.

A driver completes his pre-trip as an MTO officer looks on.

All the drivers who competed in the provincials this weekend earned their way in. They had to finish among the top four in the Toronto or Central Ontario regional championships, or one of several OTDC-sanctioned competitions put on by individual fleets and/or municipalities. The competition is growing and an effort is underway to put on an Eastern Ontario regional championship next year.

Next year is a big one for the Ontario competition. Not only will it be its 70th, but it will also be Ontario’s turn to host the national championships, slated for next fall in Brantford, Ont. at the municipal airport there.

Saturday, 50 drivers and more than 60 volunteers endured the hot, hazy July weather at the Flying J in London, Ont. Two courses were set up and trucks were efficiently run through them from 9 a.m. until about 2:30 p.m. In addition to the obstacle course, drivers also had to complete a written knowledge test and perform a timed pre-trip inspection under the supervision of an MTO transport enforcement officer. No pressure!

The driving course was unforgiving. I watched one straight truck after another bump the rails in the alley dock until I finally had to question the judges: “Is it even possible?”

“Sure,” they said, measuring the distance between the barriers to reassure me, and perhaps even themselves. Sure enough, Truck 12 came along and backed perfectly between the barriers, proving it was indeed possible. A couple more trucks also nailed this section, but then hit a barrier as they pulled forward, the drivers’ minds perhaps having already moved on to the next obstacle. There’s no room for error in this competition and even the briefest attention lapse will be punished with a points deduction.

While the province’s best drivers demonstrated their skills on the course, the top MTO inspection officers were taking part in their own competition at the same venue, to determine which of them will represent Ontario in the North America-wide inspectors’ competition later this year in St. Louis, Mo. We’ll have full results from that competition this week.

Even the significant others were invited to compete in a day-long celebration of competition. The Powder Puff contest allowed drivers’ wives to test their skills on a short obstacle course behind the wheel of a Dodge Ram pickup. Kelly Ward won this competition and received the same treatment at the banquet as the winning truck drivers, minus the trip to Regina.

Trucknews.com will have exclusive video from the championships later this week.

Here is the complete list of winners from Saturday’s Ontario Trucking Driving Championships, and a photo gallery below:

Highest Points of the Day

Highest Pre-trip Award (A three-way tie, with each driver acing the pre-trip)

A volunteer briefs a driver.

B-train competitors do a course walk-through.

A driver completes his pre-trip as an MTO officer looks on.

Joe Kuntz was named Grand Champion and winner of the single-single division.

A matter of inches.

No room to spare.