HANNOVER, Germany — If there was an overall theme to the 2016 version of the IAA Commercial Vehicles Show, it was probably electrification, followed closely by… you guessed it, connectivity.

Daimler led the way on both fronts by showing off its very cool Mercedes-Benz Urban eTruck as well as the all-electric Fuso eCanter and a futuristic Mercedes delivery van complete with a pair of resident drones — but no steering wheel. 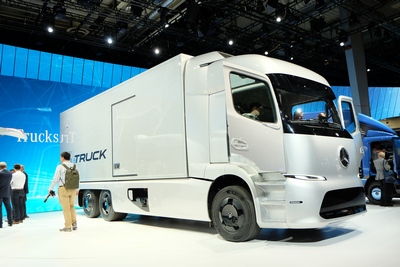 Even Cummins got into the electric vehicle act by talking about supplying “right sized” diesel engines in hybrid vehicles.

It’s no coincidence that urban challenges are being addressed here, and they’re global. By 2050, cities will be home to 70% of the world’s population, Daimler noted. By that time, for example, the additional amount of milk needed in cities around the world will require 50,000 additional truck deliveries every day. Made with gas or diesel trucks, problems with emissions, noise, and congestion — not to mention infrastructure — would simply be too big to bear.

The three-axle class-7 truck with a maximum gross weight of 26 tonnes (about 57,230 lb) produces zero local emissions and runs silently, yet it’s the equal of an equivalent diesel truck in terms of load and performance. It’s also economical to run, the manufacturer says. Buying it might be another matter.

The Urban eTruck’s drive axle sports electric motors directly adjacent to the wheel hubs. Their maximum output is 2 x 125 kW (168 hp), while torque is 2 x 500 Nm (368 lb ft). The standard version of this axle has already proven itself in buses.

The truck’s battery system is modular. The basic arrangement is a battery pack consisting of lithium-ion batteries with a total capacity of 212 kWh, which results in a range of up to 200 km – normally enough for a typical day’s delivery round.

It gets really interesting with the possibilities opened up by connectivity to create a seamlessly integrated system that incorporates range and load management, along with basic vehicle information and all manner of other data.

With the telematics system connected to the drive control, there are scheduling gains — instead of conventional fixed delivery runs there’s a flexible system and dispatch is rendered easy. It ensures against over-extending or under-utilizing the range of a fleet’s trucks, taking into account load space, weight, range, and driving times. It’s all closely monitored and the system will intervene if unforeseen events force the truck to the limits of its range, possibly stopping it for a quick re-charge.

A tablet provides the driver with information about the trip, including continually updated and precise details on range and battery strength.

In a round-table discussion with the North American press, Daimler Commercial Vehicles chief Wolfgang Bernhard admitted that two years ago he wasn’t a fan of electric vehicles but had changed his mind because of much improved battery technology. 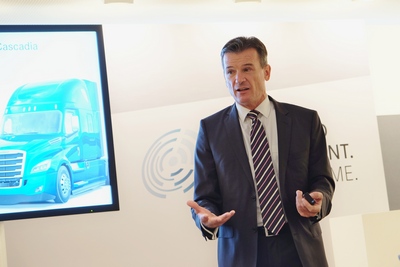 We won’t see this one on the road tomorrow or the next day, but some of its technology — especially the integrated management of range and work — might be with us a lot sooner. It’s a game changer.

The all-electric class-5 Fuso eCanter, now in its third generation, is already in small-scale production and will find its way to some western U.S. urban markets in 2018. Canada is not presently in the plans, in part because cold weather limits battery power substantially, thus reducing a truck’s range. As it is, the truck is good for a little more than 100 km, with 160 km planned — in moderate climates. Canada will have to wait a bit, say Fuso officials.

Electric trucks are more readily adapted to Japanese and European cities than those in North America because the latter are so much less dense and frequently demand longer trip times. Range is thus the key issue, and while 50 km might be all that a truck needs for a day in Paris or Kyoto, even twice that isn’t likely to be enough in Los Angeles or Toronto.

Fuso’s answer to the range problem in general is to offer scaled battery packs with three to six sets of batteries of 14 kWh each. This allows the eCanter to be adapted to customer needs with regard to range, price, and weight. A simple but clever idea, the concept being based on the idea that for some operators, payload is more important than range, while others are happy to sacrifice payload for longer range, i.e. more batteries.

Batteries will be leased incidentally, meaning they can be updated in the original truck as technology improves.

Daimler says the eCanter benefits from lower technology costs so it will be launched at “a competitive price”. Lower running costs compared to an equivalent diesel model mean that any additional expense can be repaid in less than three years. Maintenance costs are said to be as much as 70% lower than a similar diesel truck.

Look for additional IAA stories in the next few days, including a report on a round-table chat with VW Truck and Bus chief Andreas Renschler and Navistar boss Troy Clarke.