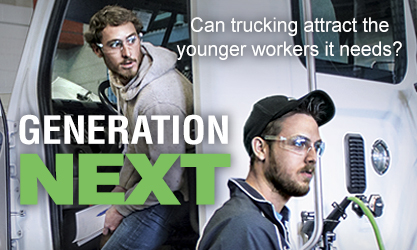 Attracting the under-35 crowd is a full-time job for many marketers, including those trying to sell jobs in the trucking industry.

Already facing a growing labor shortage in all areas of the industry, fleets should brace themselves for the onslaught of retirements coming in the next few years. As baby boomers decide to cash in and trade their trucks for lawn mowers and golf clubs, carriers face a crisis.

Much of the conversation to date has focused on driver shortages, with an expected need for 34,000 drivers by 2024, according to Canadian Trucking Alliance research, but industry insiders say the shortage extends through all areas of the business.

Al Thompson, program coordinator for the truck and coach program at Ontario’s Centennial College, says fleets approach him looking for help finding employees to work as dispatchers, mechanics, dock workers, and in their back offices, in addition to drivers.

Those under 35 currently represent 35% of Canadian truck drivers, 2% less than the Canadian labor market overall, and that’s down 3% from a decade ago. Isabelle Hétu, director of programs and services at Trucking HR Canada, says even that small difference means there aren’t enough new hires to cover retirements.

Hétu thinks the perception of the industry, along with lack of promotion, may account for the dwindling interest, and she’s not alone.

Thompson says middle and high schools aren’t encouraging students to look at the industry like they used to, with guidance counselors and parents pressuring students to go to university.

Trucking and trades pay as well or better than many careers that begin with a university education, but Thompson believes not a lot of people know there are competitive salaries, benefits, and solid career paths in the industry, or trades in general.

“Our parents don’t want to hear about sending our kids to trades,” he says. “I think they know you have to pay well if you need a trade done, but I don’t think they really examine the career.”

Centennial and other schools are trying to reach out to the younger members of the labor market through pamphlets, talks, and booths at college and career fairs. Thompson says guidance counselors and students who are less than academically inclined are often relieved to receive the information the college provides them, as they can’t find it elsewhere.

Trying to strengthen a workforce with younger members starts about four years before kids can even get a driver’s licence. Thompson says that by the time students reach high school, many of them are already focusing on a career path.

Centennial College currently runs a skills camp for Grade 7 and 8 students, exposing 12- and 13-year-olds to career possibilities. Thompson says the camps reach another under-represented group in trucking as well – girls.

Centennial also offers a course for high school students who may have already decided on a career in trades.

At Bramalea Secondary School in Ontario, the college offers a high school version of its truck and coach mechanics program to help expose the students to the industry and let them know what they can expect. So far Thompson says the program has been successful, but it’s just one measure in an industry desperately seeking staff.

Hétu says companies know they have to change the way they interact with employees to be more attractive to a generation that has a reputation for wanting more from a job than just a paycheck. Of the 48 companies recognized through its Top Fleet Employers ­program, many offer incentives such as professional development and training programs, reimbursed tuition fees, and promotions from within.

One of the biggest things the ­younger generation is asking for is ­coaching and mentoring. Hétu says research shows the educational model followed with millennials gave them immediate feedback on their work, providing them opportunities to ­correct mistakes faster and ask questions. Coaching also helps create a social workplace, another thing the age group stresses is important.

While millennials may be demanding coaching and mentoring, Hétu says employers may be surprised to learn that older employees are just as enthused with the approach. In addition to giving employees feedback earlier and more often, mentoring allows older employees the chance to share years of experience with younger employees, benefitting everyone.

“We did see that there may be a disconnect between employers and young employees in the workplace, but that’s nothing that we haven’t seen by other generations before,” she said. “Based on our research millennials have been seen as hard-working and willing to succeed, and looking for advancement, which also came out for those 35 and older.”

The perception of feeling entitled isn’t the only myth potential younger employees are facing.

Marc Cadieux, president and general director of the Quebec Trucking Association, says the perception that hiring younger, less-­experienced drivers will cause an increase in insurance premiums is also a myth.

Cadieux and the association have been spearheading a pilot project to get drivers as young as 18 on the road, provided they are driving within Quebec.

When the pilot was being pitched, Cadieux says he heard a lot of the same concerns
that fleets in other provinces are voicing – namely that insurances rates will sky-rocket if those under 25 get behind the wheel.

To address the concern, Cadieux says he met with auditors and insurance companies to see what could be done and discovered the fear was unfounded.

Insurance adjusters and auditors base premiums on an average of incidents across a whole fleet, not a per-driver basis. Cadieux says fleets that hire young drivers won’t be affected as long as they continue to employ some older, more-experienced drivers to offset the risk.

“How can you have a statistic of a risk if they aren’t on the roads?” Cadieux asked. “I think it’s a bit of a legend. It’s like being scared of being scared.”

The Quebec program aims to have 300 young drivers participating at the end of four years. Currently it has placed 100 young people behind the wheel.

The program is strict, preventing young drivers from working outside the province or carrying hazardous materials. Drivers must also be paired with an older, master driver to help coach them and answer questions.

Young drivers face more than just insurance concerns, of course. Truck drivers operating in the United States must be over 21. That puts cross-border fleets in a tough spot when looking at hiring in a younger demographic.

Rick Mikula, program liaison officer at Ontario’s Humber College Transportation Training Centre, says the school doesn’t get many program applicants under the age of 18, but when they do, he makes sure they’re informed of the uphill employment battle they may be facing.

In Ontario those insurance myths are persistent, and Mikula says it’s one of the main reasons he hears suggestions that fleets don’t hire young drivers.

Mikula tries to redirect the students into other areas of the industry for a few years, so they can be more easily employed and gain experience before returning to driving.

“Until there’s ways that the industry can address those barriers then there’s not much point,” Mikula says of taking on younger drivers. “Currently there’s no path (to employment) for the high school student. In my perfect world, there would be a two-year program for high school students.”

For Mikula that program would include in-depth courses which teach students about operations, logistics, and fleet management in addition to driving, to give them experience before getting them on the road. Currently no such program geared toward those under 25 exists.

Both Trucking HR Canada and the Quebec Trucking Association have found one of the keys to recruiting younger employees is promotion.

While Cadieux’s group has had success with a campaign it calls “Pas Camion” or “No Truck” – featuring images of snowboards, hot dogs, and other things that arrive by truck – Hétu believes better promotion of the lifestyle driving affords would attract the younger set.

“Most people wouldn’t be able to travel and see all of North America in their own lifetime, but drivers get to do that,” she said.

Existing millennials at risk of leaving

Recruiters may be looking for ways to attract new millennial-aged workers, but droves of -existing workers under the age of 35 are already thinking about leaving.

Seventy-five percent of drivers between the ages of 18 and 35, averaging six years of -experience, plan to leave within five years or aren’t sure they will stay, according to Trucking HR Canada’s new Millennials Have Drive report. Referenced reasons include the lack of -pension, -benefits, advancement potential, or respect from customers. They are dissatisfied with long hours, rising costs, wages, the desire for self-employment and the need for a work-life balance.

It’s a troubling finding given that millennials represent 37% of Canada’s workforce, while just 15% of today’s truck drivers are under 35.