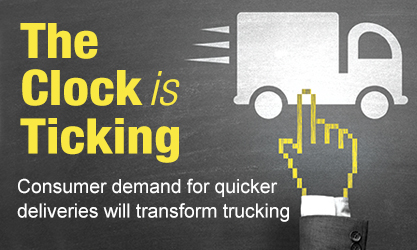 Seventeen years ago, Tom Hanks stood in a shipping yard and lamented that 87 hours was an eternity. Castaway was on the big screen, and the Hollywood superstar was playing a time-obsessed operations manager for a world-wide shipping company. Shouting that “the cosmos [were] created in less time. Wars have been fought and nations toppled in 87 hours. Fortunes made and squandered,” Hanks was forecasting the future of the supply chain.

From 87 hours to just 24 or less, time is running out for goods that take more than a day to get to consumers, and trucking is undergoing massive changes, all thanks to a store that sells just about everything: Amazon.

As e-commerce grows exponentially, taking larger and larger shares of markets like household goods, cosmetics and personal care items, groceries, and furniture, it’s re-shaping how goods are packaged, shipped, and stored, forcing fleets to adapt quickly. Retail markets were up in July all over the United States, but online sales saw an increase of 1.3%, compared to just 0.1% for traditional brick-and-mortar stores.

Industry analyst Thom Albrecht predicted during the recent PeopleNet and TMW in.sight user conference that traditional retail stores would continue to take a hit, with another 20% shuttering their doors in the next five to seven years.

The lack of physical locations will only increase the number of goods being shipped directly to consumers. That increase in online shopping will also mean an increase in the cost of shipping, and in consumers’ expectations.

Albrecht told audiences that surveys conducted by his company, Sword and Sea Transport Advisors, show 55% of consumers said they wanted same-day shipping of online goods and groceries, while 46% wanted next-day shipping. Combined with increased demand for low- or no-cost shipping to the consumer, the pressure is mounting for carriers.

“People used to work around efficacies and say, ‘Well, I’m going to get a full load and then I’m going to take it to wherever I’m going,'” said Shue. “Well, now you have a relationship with this really large customer and they’re saying, ‘I need these items to get to this area at this time, and I don’t care if you’ve got a truckload or not.'”

“You’re not delivering to a big box store or a grocery store. You’re delivering to the point of consumption. It doesn’t mean you get rid of the warehouse. It means that they’re configured differently and located in different places each time,” he said.

Conference buzz had fleets worried that more online sales would mean fewer drivers on the road, but Wangler and Shue agree it will mean more drivers. While Class 8 trucks will haul to regional warehouses, they foresee more delivery drivers taking to the streets to make the final drop.

“If you think about the current model, the Class 8 delivers to the store. You then go get in your vehicle and you drive to the store. What’s the new model? The new model says my personal vehicle is replaced by something less than a Class 8,” Wangler said.

Those deliveries will come at a cost, however. In a traditional retail model the consumer paid for their personal vehicle and the trip to the store. Now those costs will be picked up by the retailer or the shipper.

Maximizing space and minimizing time on the road has always been the name of the game for LTL and truckload fleets, but industry insiders say minutes and miles will be make-or-break issues in coming years. Using the latest technology to find those needed efficiencies and squeeze every dime out of the final mile has become big business.

TMW, for example, used the in.sight conference to introduce its new product, TruETA. Used to calculate a driver’s time of arrival, it takes into account real-time weather and traffic data, in addition to drivers’ stops, route deviations, and Hours of Service.

Meanwhile, Canadian-based BlackBerry is in the space, keeping track of trailers instead of drivers. The former telecom giant offers Radar, which not only shows fleets the exact location of each truck, but measures density to determine how much remaining space is inside each trailer. One potential use is to match drivers and nearby trailers that have available space.

The way items are moved and stored isn’t the only thing that will be changing. Albrecht predicts some of the biggest innovations to come will be in packaging.

Much like Ikea changed how furniture was sold and shipped – getting to -consumers in flat-pack boxes, instead of fully assembled – the analyst says it is only a matter of time before packaging changes. Expect lighter, leaner, cheaper, and more environmentally conscious options to emerge.

Conference presenters all agreed that resisting the new models would prove expensive, and may even be the death of some companies, saying online retail with same- or next-day shipping was only going to grow.

“It’s causing a lot of disruption and people are having to adapt pretty quickly because there’s a lot of volume,” Shue said. “The last number I saw was that it’s going to be, I think, $500 million by 2020 in e-commerce alone. It’s just a rapidly growing marketplace and it’s having a pretty negative impact on traditional ways of acquiring goods.”