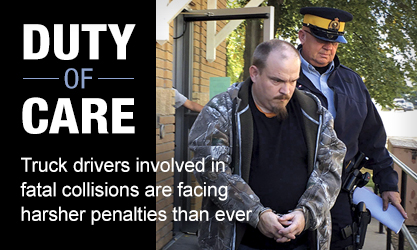 MELFORT, SK — The final chapter in a small-town Saskatchewan tragedy came without much fanfare.

After entering a guilty plea to three counts of dangerous driving causing death and one count of dangerous driving causing bodily harm, Normand Lavoie, a 41-year-old truck driver from Winnipeg, was sentenced in a Melfort, Saskatchewan, court to three years for each of the three teenagers whose lives he brought to a sudden end 28 months earlier. The sentences will be served concurrently, followed by a five-year driving ban.

On May 3, 2015, the three Carrot River boys were driving home from football camp when Lavoie, failing to notice the signs urging him to slow down, entered a construction zone doing about 84 kilometers per hour, according to his testimony.

Lavoie said he was not asleep, and evidence showed he was not over his mandated Hours of Service for the day. Later, Lavoie would be diagnosed with sleep apnea, but there was no evidence this had an effect on the outcome.

Lavoie said he was in a daze as he zipped past the orange warning signs, not seeing the car stopped by a flag person in front of him. Lavoie, whose own mother and ­grandmother were killed in a similar collision with a truck many years ago, tearfully described his highway hypnosis in a guilty plea entered this May.

“All I remember is I heard… like I was just, you know, auto pilot cruising and I heard something… I don’t want to say it snapped me out of it, but you know what I mean? And then I looked back quickly
[at my dog], and then I turned back and there’s the end of the car,” reads an agreed ­statement of facts.

Staff Sergeant Carolle Dionne said fatalities involving commercial vehicles are at the highest the province has seen in eight years, with 47 fatal collisions recorded as of the end of September. Three of those fatal crashes for 2017 are currently before Ontario courts, with the commercial drivers awaiting trial on careless driving charges.

In February a 19-year-old Windsor woman was killed when she was hit by Dinesh Kumar, 30, of Mississauga, who failed to stop his truck in slow-moving traffic. Likewise, a Quebec man faces charges after four people were killed outside of Kingston in May. An unsecured load played a part in further charges laid in May, following a collision on Highway 400 north of Toronto. No fatalities resulted from that crash, however, OPP said it could have easily been deadly.

Meanwhile, legislators are not relying on judges to impose harsher penalties. On September 20 the Government of Ontario announced tougher sentences for drivers found guilty of careless driving causing death or bodily harm. With fines of up to $50,000 and two years in jail, the new law, set to be voted on in the Ontario legislature this fall, far exceeds current sentencing maximums of a $2,000 fine and six months in jail. The Ontario drivers already facing charges will be sentenced under the old penalties if found guilty.

Dionne says the things that cause commercial vehicle drivers to have a collision are the same as those for passenger vehicles – fatigue, distracted driving, alcohol and drugs, and following too closely are some of the frequent factors – but because of the sheer size of the vehicles, the results are often much deadlier.

“There is a greater duty of care for them, just because the size of vehicle they’re operating. They have to always be cognizant of the impact,” she said. “Because of the weight and the size it’s a no-win situation for the ­passenger vehicle.”

Stephen Laskowski, ­president at the Ontario Trucking Association, agrees with the sentiment, saying that drivers should be held to a higher standard, and the industry should hold itself to a higher standard on the road. Laskowski notes, however, that commercial vehicle operators have proven to be safer than other road users, and those numbers hold out, with the OPP showing commercial vehicle road incidents representing just 10% of the overall total crashes for the year so far.

New technologies are helping law enforcement to better reconstruct accident scenes, with drones, Electronic Logging Devices, and computer data taken directly from the truck, ensuring officers get a more accurate picture of what happened after these crashes.

Dionne says officers can tell the speed the vehicle was traveling, when the brakes were activated, if there was mechanical failure, and a whole host of other factors by reading what’s essentially a truck’s “black box”. Those accident reconstructions help officers decide ­whether charges should be laid, and if those charges should be small fines or have the potential for larger ­prison sentences.

“They’re looking at anything. If there are no mechanical issues then it’s driver error,” she said.

Dionne said that each collision is investigated on a case-by-case basis, and while she had no numbers as to how many more-severe charges are being laid by officers, she said the increase in fatal crashes has meant an increase in charges for drivers, believing it is often inattention and traveling too close that have played a part in lost lives on the road.

“The majority of our [Commercial Motor Vehicle] drivers are much safer, but we are seeing an increase, and we’re trying to determine is that because of inattention,” she said. “It only takes a second.”

“It’s probable cause just to get pulled over just for driving a truck. Any time an enforcement officer wants to stop you they can, just because you’re driving a truck,” he said.

Shaw says that isn’t a complaint, but as lobbying organizations work with governments to create a safer roadway, it is to build upon a system that already asks more of its commercial vehicle operators. He says the work will continue until there are no accidents on the road, in something he calls vision zero.

He says those harsher ­sentences may be just one tool for creating safer roadways, but also questions whether they are the best choice.

“We are engaging with the government on a whole host of road safety issues. Those are more proactive measures, but the punishment is reactive.”