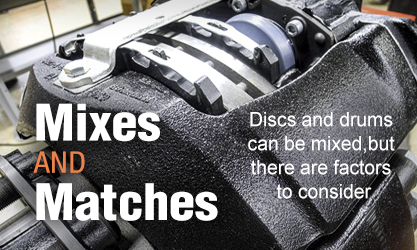 Now that air disc brakes have taken their place in North American truck makers’ order books, fleets are still asking questions about mixing discs and drums. Are there serious downsides to running discs only on the steer axle? Should I worry about mixing disc-equipped trailers with drum-equipped tractors or vice versa?

It’s fine to mix drum brakes and disc brakes, but there are a few things to consider. When a truck with mixed discs and drums leaves the factory, the manufacturers’ engineers have already considered the performance implications and matched the brakes according to the application. Under normal circumstances, brakes at all wheel positions will be doing an appropriate share of the work. It’s when demand on the brakes is high that fleets may notice a difference.

“The best example would be when descending a hill and the brakes start to get hot, the drum brakes will start to fade and that will shift more of the workload to the disc brakes,” says Keith McComsey, director of marketing and customer solutions at Bendix Spicer Foundation Brake. “The disc brakes are going to do more work and they are going to see more heat, and obviously more heat leads to more wear on your friction (brake pads).”

The same thinking applies to vehicles with mixed brakes, say disc on the tractor and drums on the trailer. On long descents or in heavy stop-and-go driving, the disc-equipped vehicle will wind up doing more of the work as the drum brakes fade. This will ultimately lead to increased pad and rotor wear and possibly shorter reline intervals than the customer might have anticipated.

That imbalance might be more pronounced in situations where very new disc-equipped tractors pull older drum-equipped trailers, particularly those that have already experienced a brake re-line, and especially in cases where sub-optimal friction material has been installed. Then the disc brakes will be picking up more than their share of the stopping effort.

“In vehicle applications the brakes are usually only working at about 20% of the total capacity, which is to say, typically the driver averages only about 20 psi application pressure to stop the vehicle,” says Joe Kay, Meritor’s chief engineer – braking systems. “Knowing this fact we make sure that disc and drum are converting similar energy where the vehicle is typically operated as well as being capable of very short stopping distances given an emergency situation.”

Other factors that can play against the disc brake include the condition of the foundation brake, its cams and bushings, and the ability of the brake adjuster mechanism to follow a drum that’s expanding along with the temperature increases associated with heavy use. If the foundation brake is sloppy or poorly maintained – and the brake’s performance drops because of it – the disc brake will step in and take up the slack, increasing its potential for wear.

“There are more maintenance items on a drum brake and they need regular attention,” notes McComsey. “Poorly maintained drum brakes will put extra load on the discs, and while discs need regular preventative maintenance as well, they are more tolerant in the short term. But if you do neglect them, they will not perform at their best.”

The typical maintenance cycle for disc brakes is close to double that of drum brakes, and rotors can be expected to last up to 1.6 million kilometers. But pads that are “overworked” because of mixed brake set-ups can require friction material to be replaced sooner than expected. The choice of that friction material can also have a profound effect on the brake’s remaining service life.

“When we designed our air disc brake system, we optimized what we call the friction couple,” says McComsey. “The friction material we use meets all the regulatory requirements, but it is also designed to provide the ­longest service life when matched with the ­metallurgy of our rotors. Once you change the pad formulation, you run the risk of faster rotor wear or even stress cracks caused by possibly higher ­operating temperatures.”

The aggressiveness and performance of aftermarket lining material can vary widely, and the wrong material can reduce performance or even damage a rotor. That said, there are no regulatory requirements governing the brake pad material purchased by an end user. You can buy and install pretty much anything you want. But bear in mind that your choice can affect the investment made in a disc brake system.

Many fleets are dipping their toes in the air disc brake pond by spec’ing disc brakes only on the steer axle. It’s a start, but if you’re in a demanding application, any shortcomings in the drive axle brakes will be shouldered by the expensive brakes on the steer axle.

In less-demanding applications, mixing drums and discs will probably cause no performance imbalance at all.

In 2010, California and Washington enacted legislation that will require sold or installed brake pads to have reduced levels of copper and other heavy metals. The legislation was enacted due to claims by environmental groups and regulators that, as brake pads wear down, copper and other metals are deposited on roadways where they are washed into streams and rivers with rain runoff. Copper in high ­quantities is highly toxic to fish and other aquatic species.

Brake manufacturers like Meritor are working on reformulating their friction ­material to meet a January 2021 deadline requiring them to self-certify that that their pads contain no more than 5% copper by weight.

“Copper is one of the elements used to manage thermal energy,” says Joe Kay, Meritor’s chief engineer – braking systems. “Since disc brakes operate at higher ­temperatures, we want to make sure the interface temperatures don’t get too high, or damage to the pad can occur through thermal destruction. Copper also contributes to stabilizing the [coefficient of friction]. This is important as the brake is used at various speeds, temperatures, and application pressures.”

“It typically takes four years to develop and release a brake friction because of extensive testing involved,” he says. “There are a lot of objectives when releasing a friction. Performance is the primary, but we also need to make sure NVH [Noise, Vibration and Harshness] is good, wear kindness on the rotor is acceptable and the cost is will be tolerated by the market.”