LETHBRIDGE, Alta. — The skies were clear and the sun smiled down on this southern Alberta city as it hosted what’s planned to be the first of an annual showcase of the trucking industry.

The event, held on Saturday, July 18 at Lethbridge’s Exhibition Park, saw approximately 35 trucks turn out for the Show & Shine in the parking lot while some 30 booths were set up inside the building. Exhibitors inside ran the gamut from trucking companies looking for recruits to the Commercial Vehicle Enforcement Branch, Healthy Worker, TD bank and more – including the show’s headliner, Gord Cooper and his Smokin’ Gun drag racer, a 3,400-plus horsepower 1968 Canadian Kenworth W-923 that sat prominently just inside the venue’s front doors. 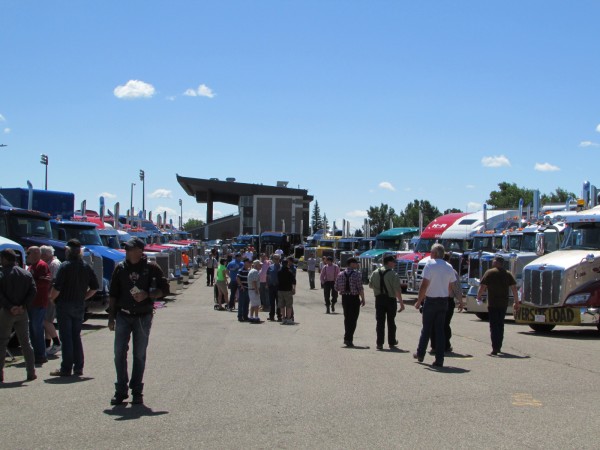 The turnout came as vindication for the man who dreamed up the Expo.

“It’s beyond our dreams. Right from nine o’clock this morning, when we opened the doors, we had a huge influx of people. If you go outside you can barely walk between all the trucks,” said long-time trucker Lane Jacobson. “Starting it, I never dreamt that for a first year we’d get the amount of people involved that we have or the public’s participation that we have.”

Jacobson said the reaction from the civilians who turned out was “very positive. (People) were unaware of the trucking industry…and by coming to this event and meeting with people, seeing the trucks, being able to get into the trucks – we’ve had a very positive feedback.”

Sweetening the deal for attendees and the truckers who participated in the Show & Shine was a vote for the favourite trucks on hand, a strategy on the part of the organizers that also helped steer customers to the trade show inside the building, where the ballot box was set up. Jacobson said they had 400 ballots made for the awards, but ran out within two hours of the event’s kick-off and had to order another 500. Awards were for the Best Bobtail and Best Tractor-Trailer categories, presented by Cooper.

There was also a second set of awards, chosen by one of the celebrity attendants. “We have a Mayor’s Choice Award for best Bobtail and Best Tractor-Trailer,” Jacobson said, noting that it was handed out by Mayor Chris Spearman himself. The “public” winners were:

Also on hand with a display was Economic Development Lethbridge, there to promote the industry and the city itself.

“Lethbridge is a great place to do business,” said Heather McIntosh-Rivera, the organization’s director of business development and operations, noting “it has key industry sectors of agriculture, agrifood and manufacturing – and the transportation sector…basically underpins everything that happens in our economy.”

McIntosh-Rivera said the transportation industry has an impact of about $180 million a year on the area’s GDP and “there’s about 50 companies that work directly in (that industry) and they employ about 1,900 people. (The sector is) critical for the success and diversity of our economy.”

“All of these companies are here recruiting and we want to help ensure that those folks who do come to look for an opportunity in Lethbridge know that it’s a great place to live and a great place to work,” she said, claiming the city is one of “the most affordable mid-sized city markets in Alberta.”

Smokin’ Gun’s Cooper has seen his share of shows like this, and he told Truck West he thought this one was excellent.

“A great Show & Shine outside and a great display on the part of Southern Alberta truck dealers,” he said, noting that he was thrilled to join the event. “Lane said he was interested in having us come down and be part of the show – a draw to the show, something that’s a little bit extra exciting about trucking – and I was more than willing to come down here and display the truck. It’s an Alberta truck awareness thing – and (that) is what I’ve always been about. I’ve been in business now for 34 years, and this is basically my opportunity to give back to the industry that’s been good to me: support the economy and get new drivers interested in what’s going on – not just bring them in from other countries but show our own young people that truck driving is a good career.”

Cooper pointed out that he left engineering to get involved in trucking so many years ago.

Jacobson was quick to spread around the credit for the event’s success, saying “It’s been an amazing endeavour and we couldn’t do it without the participation and the backing from the people involved in the (Southern Alberta Truck Expo Association). They are an incredible group of people to work with and I can’t say enough about them.”

Jacobson also praised Cooper – who he said brought Smokin’ Gun down on his own dime – for being such a great headliner for the event.

He also gave a shout-out to the event’s sponsors for their support and dedication.

The event was promoted in part via social media and a local country music radio station, but Jacobson said most of the publicity came from sponsors such as Great West Kenworth and Western Star.

“They’ve all promoted it by putting it in all of their communications,” he said. “Kenworth even put it on their bills, on the bottom.”

It must have worked.

“Every business I’ve talked to has been overwhelmed with the response they’re receiving,” Jacobson said. “All of the trucking companies have had, as they put it, an overwhelming amount of resumes coming in, people coming up and talking, wanting to know how to get into the industry.”

He noted that organizers are also trying to put together a mentorship program for people who may have their Class 1 licence already, but have no experience.

“We have a box at our booth that’s (filling up) with people who’d like to join it once we have it up and running,” he said.

The initial success of the Southern Alberta Truck Expo was such that Jacobson said all the vendors and Show & Shine participants have registered for next year already “and we have people that have been coming through asking for registration for next year,” he said. “We’ve had several people do estimates, and for next year they’re estimating between 100-150 trucks for the Show & Shine and 80-100 booths. We are very excited and are looking forward to 2016.”