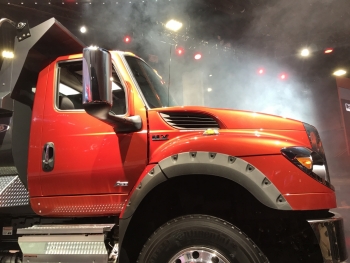 ATLANTA, GA — International has unveiled its new HV Series of trucks at the North American Commercial Vehicle Show, with several features designed to withstand the abuse of rugged vocational environments.

Powering the new offering is the 12.4-liter A26 engine, while a Diamond Logic electrical system promises easier work for body builders who transform the trucks for specific work. There are nearly 200 factory-available body integration and driver efficiency features overall.

The cab itself looks larger because there is no vent window post, and the bottom of the window has been lowered. It all leaves a larger piece of glass in the window itself. Moving the mirrors forward reduced the extent of turns that drivers make with their heads – by 15% to the left and 5% to the right. That means less muscle fatigue and neck strain though the course of the day, Stasell says.

Interior design features were driven by feedback from more than 100 vehicle customers, he adds.

The truck now includes the same gauge cluster found in the RH, Lonestar, and LT, with a customizable display in the center to track everything from fuel economy to axle loads. A shifter is now found on the steering stalk, too, helping to keep hands near the wheel at all times.

A “wing panel” dash design has been introduced to increase knee room.

The middle passenger riding along in a three-man operation, meanwhile, will be heated and cooled with a new center vent near the panel. The HVAC system as a whole draws on proven automotive technologies.

“We know we can clear a windshield faster than anyone else,” Stasell says.

There can be up to 30 customizable switches on the dash in all, along with programmable indicator lights that can come in seven different colors – maybe in the form of a yellow light to indicate a safety interlock.

The power distribution panel in the cab has no exposed wiring, either, and even features a gutter to channel away any spilled drinks.

“We had a Big Gulp and poured it all over that panel when the lid was on it,” he said, referring to one test.

Orders begin today, and the truck will enter the market in March.

It is the latest in a rapid succession of products from the manufacturer. New releases have been rolling out every four to six months, beginning with the HX heavy premier vocational vehicle, LT linehaul truck, RH for regional haulers, and the updated Lonestar that enters production in the fall.

Doors and pedestal mirrors have both been redesigned in the latter truck. Doors, for example, now swing open at a larger angle, in part to improve visibility.

A pagination switch used to flip through screens in the driver display was also mounted on the dash rather than a steering wheel because drivers noted they liked to rest clipboards on steering wheels.

The HX includes enhancement of its own, with a 51-inch sleeper for the 520 and 620 models. That will be popular for heavy haulers, Mooney says, noting the truck will be available in October. Both the HX 515 and 615, meanwhile, will come with Navistar’s A26 engine in May 2018.

The engine, promoted as the lightest in the market, will be an important draw for the weight-sensitive market, said Denny Mooney, senior vice president – product development.