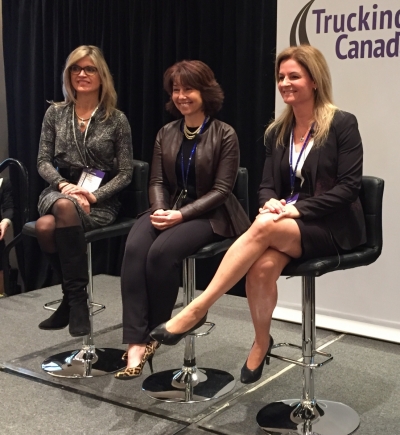 “I don’t know if I believe in career paths,” McKee adds. “Meanderings used to work very well for me.”

Despite the varied career paths, they share many similar career philosophies – and offered them up during Trucking HR Canada’s recent Women with Drive summit in Toronto.

Strong leadership strategies adopted by others certainly helped them advance in personal career paths. Saunders, who now leads a company where 85% of employees are female, credits one of her early employers for encouraging women to take on roles of every sort. “It didn’t matter our gender. We could do anything we wanted to,” she says.

For those looking to move into management roles of their own, Saunders stresses the value of asking. “If you go out and you ask for what you want, 99% of the time you’re going to get what you’re asking for,” she says. Admittedly, it is one of the gender gaps that she sees throughout business. Men will apply for roles when they are 40% qualified, but women will rarely put forward their names unless they are 100% qualified, she notes, referring to an often-referenced quote. Arseneau referred to her recent search for an Information Technology manager, and how there wasn’t a single female candidate.

Mentorship has helped guide each of them in careers where they now guide other people. Saunders counts Trailcon Leasing’s Al Boughton as a personal mentor, and herself mentors four people in legal, finance and social media roles. “I find with mentoring it’s part of my responsibility to give back,” she says. “I want to teach people what I’ve learned.” McKee, meanwhile, meets once a month with her mentor and always has a set agenda listing items that could benefit from feedback.

Their successful leadership strategies are not all directly linked to the mechanics of running a business. Each stresses the value of encouraging a work-life balance. “It can be a struggle. I really like what I do and I spend a lot of time at it and when I’m not at work I’m thinking of work,” McKee admits. But she recently instituted a policy that those on vacation had to appoint designates rather than sitting by their smartphones. Meanwhile, those who have non-driving jobs at GX Transportation have been given a Results Only Work Environment that focuses more on results rather than specific hours someone works.

All three have found another sense of balance with a focus on personal health. Trailer Wizards employees can often hear the rhythmic sound of McKee’s treadmill. Arseneau is careful to schedule personal time for family and exercise, even if it means performing work-related tasks at odd hours. Saunders prefers spinning and yoga classes.

“It’s really important to me because I’m hyper, but it also gives me the energy to get through the day,” Saunders says. And she wants employees to share in the benefits. That’s why she’s planning to have a dance instructor come in for classes. Other team-building activities included hosting a Jammie Day at work, when everyone in the office wore pyjamas.

They all recognize that business success is realized by the teams they build. It’s why Morai Logistics exposes job candidates to group interviews, and often won’t hire someone unless they feel like a good fit. There are two rules in the office. If someone gossips, it will be made public. (“It’s amazing how quickly gossip goes away,” Saunders says.) And respect for fellow employees is also demanded.

GX Transportation recently hired a consultant to help define the workplace culture because it was so important. They called it, “How to make work not suck.” The intensive three-day session defined what the company was. Regular lunch-and-learns that followed help to ensure that employees have a way to convey ongoing challenges.

And McKee stressed the value of cross-training to support employee growth. “It’s about attitude. It’s about capability,” she told the crowd, many of whom held recruiting and retention responsibilities of their own. “It’s about finding challenges and rising to them.”