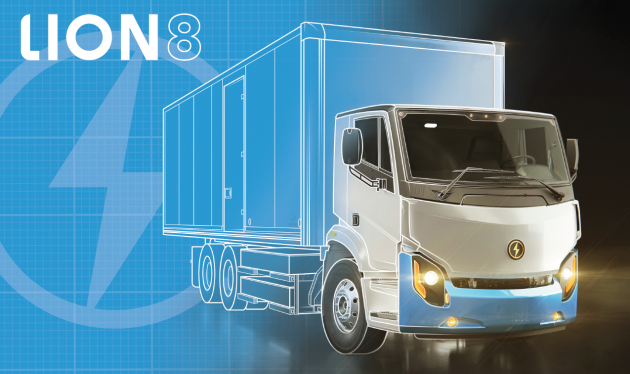 SAINT-JEROME, Que. – Quebec-based Lion Electric Company is already known for its electrified school buses, but it has now revealed an electric Class 8 truck for its lineup in the form of the Lion 8.

“There is something extraordinary about this truck,” said president and founder Marc Bedard, referring to how it was developed entirely with Quebec expertise.

Rather than outfitting an existing truck with an electric drivetrain, the Lion 8 was designed with electrification in mind.

The model has a 400-km range, which aligns with the work completed by about 45% of the Class 8 trucks sold in North America, Bedard said, referring to the truck’s urban applications. It offers up to 480 kWh of power, with an electric motor rated up to 350 kW and capable of delivering up to 3,500 Nm (about 2,580 lb-ft) of torque. The electric system is rated at 750 volts.

The truck was developed with support of the Quebec government, which contributed $8.6 million to the project. The electric motors come from TM4, the fast charging station from AddEnergie Technologies, and the telematics system from Solution Centrum Adetel Transportation. All three companies are based in the province.­­

A pre-production version of the truck was presented to the Saint-Jerome Road Transport Training Center, while production of a Class 8 tractor is scheduled for 2020.

Bedard admits the equipment comes at a premium pricepoint when compared to a diesel-powered truck, but stresses the extra cost is amortized over time. After repeated questions, he finally indicated the retail price of a Lion 8 will run between $250,000 and $400,000 depending on the spec’s.

In applications such as waste collection, the return on investment is realized in four years, he said. The lifespan of the vehicle is expected to be about 10 years, depending on the frequency of battery charging cycles.

The more mileage an electric truck covers, the more it pays, Bedard added. “Compared to a diesel vehicle that will spend $50,000 a year on fuel, the electric model will cost $10,000 a year.”

Yves Provencher, senior director – business development, confirms about 10% of the potential range is lost in cold weather. But Lion has minimized such losses by manufacturing its own battery management system.

Maintenance costs are predicted to be around 60% cheaper than a diesel-powered truck because there is no exhaust system, diesel particulate filter, transmission, or engine oil to consider. Regenerative braking activities are also expected to triple the potential brake life.

Laurent Duvernay-Tardif of the Kansas City Chiefs, a brand ambassador, added that the Lion 8 is equipped with remote diagnostics to detect parts-related issues while trucks are on the road, ensuring that replacements can be ordered before the vehicles arrive in a service bay.

“The majority of fleet operators who do business with us rely on their own mechanics,” Bedard said. Although any issues with the motors or batteries will be handled by Lion and its suppliers.

There is a 19.2 kW AC onboard charger meeting J1772 standards, while DC-based fast charging with a 100 kW connection can be completed in about 90 minutes.

The first Lion 8 is scheduled to be delivered this fall to the Société des Alcools du Québec, which distributes alcohol in the province.

“We have no limit to our production capacity,” Bedard said. “In the next year, we could build 1,000 Lion 8 trucks before we have to think about getting off the accelerator.”