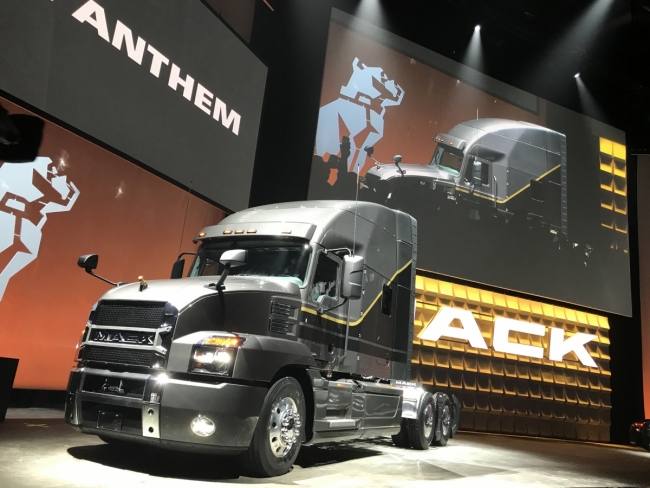 ALLENTOWN, PA – Mack was singing the praises of its newest offering last night, officially unveiling the Anthem highway tractor – a truck complete with its own theme song.

The truck made its debut in front of hundreds of dealers and industry media at an event that openly waved the American flag, with executives stressing that every Mack sold in the U.S. is still made there.

“We have helped build America,” proclaimed Mack president Denny Slagle, referring to the company’s 117-year heritage. “We have arrived at an important milestone. This launch should be seen as a new day, a new start, a game changer for our beloved Mack brand.”

Further details of the truck will be revealed during in-depth briefings later today, but several features were highlighted during the initial unveiling. The Anthem will come as a day cab, 48-inch flat-top, and 70-inch stand-up sleeper, and it clearly features an aggressive profile.

Senior vice president Jonathan Randall referred to it as a “bad-ass new truck”.

The hood and fairings form lines and angles that are admittedly a departure from the rounded shapes of some competing models. But Mack officials stress that the Anthem’s fuel economy is still 1.5% better than current day cab models, and 3% better for those who spec’ the 70-inch sleeper. That’s in addition to fuel economy gains already realized with the company’s GHG17 engines.

“A truck doesn’t have to look like a jellybean to get good fuel economy,” Walsh said.

Features designed with the shop in mind include a three-piece bumper and three-piece hood. Hood-mounted mirrors will now fold out of the way on impact, rather than leaning on tripod-style mounts that would tend to break in such situations. Breakaway mirrors include spring-loaded mounts, and there is no plastic in the hinges.

Headlamps, turn signals, and marker lights are all LEDs. The headlamps alone are 66% brighter than incandescent models.

For those in the driver’s seat, the steering wheel has a flat bottom, to make it easier to enter and exit the cab. Performance-related information is fed to drivers through a 5.5-inch display, while a seven-inch “infotainment” display offers access to features such as satellite radio.

The 70-inch sleeper is said to be high enough that someone taller than six feet can walk straight from the driver’s seat and into the sleeper. There’s also an extra 35% of available storage space overall, adding up to 27 cubic feet — enough to hold 19,000 golf balls.

The company is clearly looking to carve out a distinct share of the on-highway market. Said Randall: “We are not here for participation trophies.”

“The world is also changing very quickly, and that means we need to continue to follow that change and lead that change,” said Martin Lundstedt, Chief Executive Officer of the company’s Volvo Group parent. “It comes with an extremely big responsibility to continue to develop a brand that is more than 100 years [old].”

“We believe in the strength of a global group, but we also believe in the independence,” Lundstedt added, stressing that Volvo stands behind its Mack brand. “Since I was a young kid, what is [the] American brand of trucks? It’s Mack.”

Last night was clearly about singing the truck’s praises. Literally. Country singer Steve Moakler was even on hand to sing the new song, Born Ready.

“If any truck deserves to be called Anthem,” said Walsh, “it’s a Mack.”