TORONTO, Ont. — Doug McGowan submitted no fewer than 101 resumes, but not one fleet had called him back. It just didn’t make any sense. During his time in the military he drove everything from armored vehicles to military pattern trucks, and learned how to work tire chains in punishing environments north of the Arctic Circle. Shouldn’t that count for something?

The sign promising jobs for “propane seasonal drivers, Class 5 with air” screamed out like an insult. He submitted his resume and clean abstract to that very business two weeks earlier, and hadn’t heard a thing.  But McGowan went back again. And again. And again. Four times in all.

The job that emerged became his first stop in a second career. 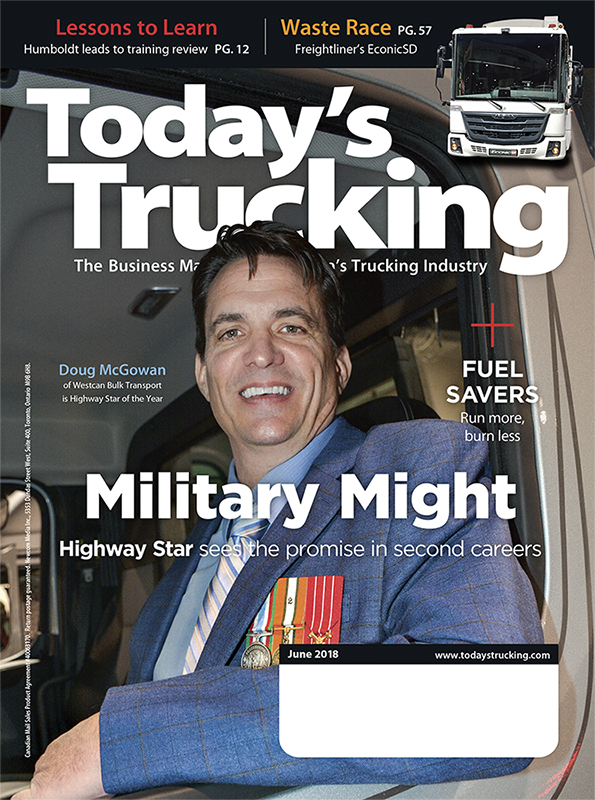 Training for a Class 1 licence came next, as did the time learning from a mentor. The trucks became ever bigger, leading to work with the B-trains he now drives for Westcan Bulk Transport.

Last month he was also recognized as one of Canada’s top ­truckers – earning the Highway Star of the Year Award presented by Today’s Trucking and Truck News magazines.

“There are a lot of excellent drivers out there,” McGowan says, reflecting on the honor. He hopes other retiring military personnel might draw something from his story and consider driving as a career. Maybe it will convince more recruiters to consider this labor pool as well.

“He’s the sort of guy that gets picked for special projects,” says Nick Martin, training supervisor with Westcan Bulk Transport in Calgary, offering examples like shipments to Norman Wells in the Northwest Territories. “He has a great attitude, and a safe and analytical approach to the job.”

The loads of fuel or asphalt can certainly be challenging. The mountainous terrain McGowan drives is often so steep that he’s left with a view of truck rooftops rather than taillights. But he leans on military training for a mindset that always puts safety first.

The secret to avoiding distractions and meeting expectations boils down to three words, he says: think, taught, task. Think to prepare yourself and equipment, plan the route, and use phones before moving. Taught involves remembering training, what you’ve learned since, and the importance of asking for guidance when in doubt. Task is a mindset, using a mental walkthrough, mitigating change, and minimizing distractions. All the lessons have been neatly printed in a notepad as a reminder.

He’s quick to share such lessons as well. When coming across the seasonal workers who accept his loads of asphalt, McGowan is quick to encourage them to wear coveralls and lower shields on their helmets, no matter how hot it is. One time, after his propane tanker passed a roadside check, he took the time to teach the inspector about the nuances of such equipment.

“They’re just guys like we are, trying to do their job,” he explains. “If this safety equipment doesn’t work and a guy’s hauling propane, they should be shut down.”

Pete Handler, a friend, recalls McGowan’s first reaction to hearing about a driver from another fleet who had been badly burned on the job. McGowan didn’t just share the story at a truck stop counter. He took the time to ­gather all the related facts that he could, sharing them with fellow drivers, law enforcement agencies, and fire departments, looking for ways to prevent future tragedies.

Love of the job

McGowan says he enjoys the freedom and responsibility that comes with being a driver. “You can make six figures, and you’re left alone, and you’re expected to do the job, and expected to do it properly. You’re not babysat. The phone is not ringing all the time,” he says. Above all, the industry offers a sense of camaraderie that reminds him of military life.

He offers an example from last winter, when he and another driver nosed up to a stranded Western Star in the Northwest Territories. The cold was brutal, but they took turns on the repair as their hands were soaked in coolant. Other drivers began rolling in with jugs of the all-important fluid, after hearing a call for help on the radio. “This is what I love,” the driver of the Western Star told McGowan, explaining why he had returned to the job after fighting cancer. “I bought this little truck as soon as I could get back on the road, and I’m out here with you guys. This is all I want to do again. This is living.”

McGowan agrees. “Every example is a nice reminder to all of us, of the kindness, of the teamwork,” he says. Whether it’s a welcome voice on the radio or some help with a repair, they’re all part of a larger team.

He knows routes in areas like the Mackenzie Valley are not for everyone, especially when temperatures drop below -40, where Celsius and Fahrenheit temperature scales align. (“You’ve got to creep around for the first 20 minutes to let the bearings warm up,” he says.) But the experience is not unlike what he knew in his first career.

His driving in the army began with a four-track amphibious articulating vehicle on the ice roads of Norway, 200 to 400 km north of the Arctic Circle, and dealing with all the steering challenges that come with rubber tracks on scored ice. “We were the first vehicle in to many of these places in Norway or Scandinavia,” he says. “We took the vehicle over a saddle and it was just a sheer drop off for hundreds of feet on either side … These valleys up there, they’re very tight. They’re very narrow.”

It wasn’t the only harsh driving environment. After Sept. 11, 2001, he spent months driving VIPs along the Middle East’s Gaza Strip. The training there involved identifying safe spots to stop if he was ever hit, and how to drive through obstacles if blocked.

McGowan served with the infantry, air force, navy, and army engineers before being discharged. And he later worked in geomatic intelligence, offering the mapping support for bombing missions in Libya and recovery operations in an earthquake-ravaged Haiti. But driving offered a close fit to what he looked for in a new career.

“I always had this urge to explore. I never wanted to pick rocks and run harrows on the farm,” he explains.

Still, he wonders why industry recruiters aren’t lining up to hire people with his background. “Maybe they think that ex-military people, they’re going to hire some by-the-book nut, or like the Tasmanian devil.” When issuing those resumes many years ago, he even got to the point that he removed military service from his resume, and changed the reference to federal public service.

He now encourages industry human resources teams to attend military Second Career Assistance Network (SCAN) seminars, to show veterans that driving jobs are not like they remember from TV shows and movies like BJ and the Bear or Smokey and the Bandit. Open houses and swamper programs could also expose the potential recruits to the realities of trucking, the Highway Star says. With the financial support of pensions, these drivers may even be more open to seasonal work.

“They will most likely have lots of driving experience that won’t even show on your abstracts. I’ll tell you, you’ll get top-notch, excellent, dedicated people, fully committed to the mission you assign them,” he says. “I don’t think I was such a bad hire.”