The Kitchener, Ont. truck driver made his debut on Season 5 of MasterChef Canada nearly a week ago and was promptly eliminated because his sauces just weren’t strong enough.

The 56-year-old owner-operator attended his second audition for the show last year, making it through to the final 21 contestants on the CTV cooking show on the strength of his mini-muffins.

The muffins are more than just the traditional cake-style one expects, with savory varieties including shrimp and taco that he makes with his granddaughters.

The seven muffins that won him the coveted spot on the show were made from tortillas cut into small circles and fashioned into tiny pockets containing everything from appetizer to dessert, and even included a small lemon-flavored palate cleanser.

His favorites are the ones with a little bit of heat to them.

“I use jalapenos and spicy cheese,” he says. “Whatever’s hot and kicking around.”

The show was shot over several days in the fall at a studio just north of Toronto, but didn’t air until April 3.

Maltais said everyone on set was wonderful, but the competition wasn’t without its trying moments.

“It was pretty stressful watching that clock tick down.”

Contestants on the cooking show have just an hour to create a dish for three judges using provided ingredients. The overall winner at the end of each season gets a prize of $100,000 and a new kitchen.

Maltais has plans for that kitchen redesign – with visions of adding a built-in double oven, new gas cooktop, and a new range hood to his space – and he plans to get there with his third audition for next season.

His current kitchen was created when he and his wife Lisa knocked out the living room wall and expanded it to create space for entertaining – and of course working on those sauces.

“I’ll be the oldest guy to compete, but I’m going to give it a try.”

A new kitchen space would give him room to try something else he’s been working on – a YouTube cooking show.

“It’d be kind of nice to have a little show too,” he says. “I tried it a little bit with my granddaughters, making cookies and stuff out in the backyard. It kinda’ worked.”

His Instagram page, @grumpechef, features his cooking creations and his time with his two nine-year-old sous chefs.

“They were here the day Chef Michael came and gave me my cooler with my invitation attached to it, which was really quite the surprise,” he says. “They really enjoy it.” 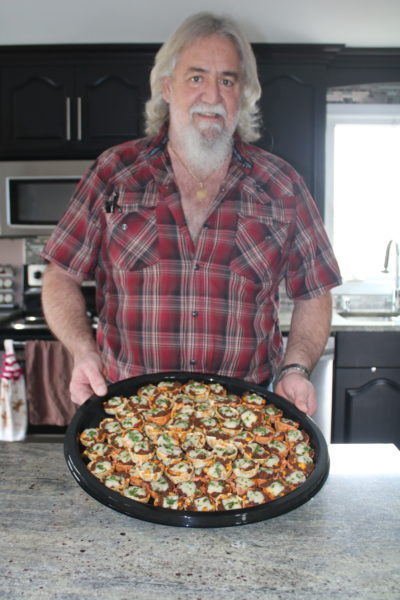 Maltais has always had an affinity for cooking, but didn’t begin to invest a lot of time into it until after he gave up drinking and smoking. Needing to be busy doing something he began to invest time into making the culinary masterpieces.

Maltais also owns a Harley Davidson motorcycle which he takes for a spin when he’s not cooking up a storm.

All of this is done in his spare time away from trucking. He says he’s briefly considered giving up his day job as a regional hauler to make the tiny treats full-time, but he knows the pursuit wouldn’t be as lucrative and he enjoys his time on the road.

Maltais took up trucking more than 12 years ago after losing his job at the BF Goodrich plant, which closed in 2006.

“I like driving. I’ll drive anything,” he says. “I’ll never retire.”