WINNIPEG, Man. — Just as a family needs space to grow, so does an association striving to offer its members the tools they need to get the job done right.

The Manitoba Trucking Association (MTA) is doing just that – continuing to expand its services and grow its membership – spurring the recent move into its newly-renovated facility, which executive director Terry Shaw believes will help make those goals a reality. 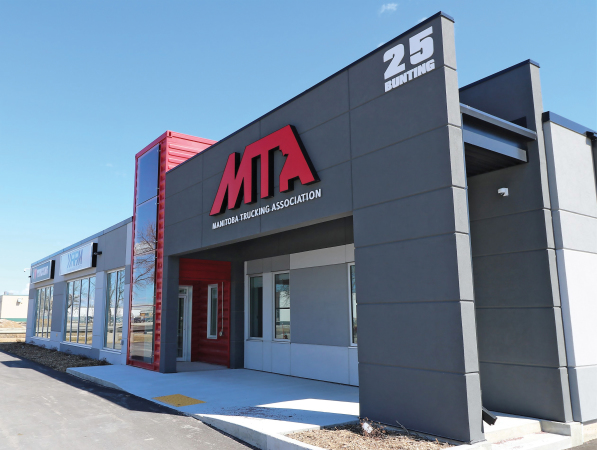 Shaw said the building, in its former state, had served its purpose and members well up to a point, but space was scarce.

“Once our board agreed on the creation of our RPM Trucking Safety Program, we knew that we would need more space for staff and classes,” Shaw said. “We looked at some other facilities that might fit our need, but ultimately decided that renovating and expanding our current space made most sense.”

And renovate they did. Looking at the new facility, not only does the building exhibit a sleek, modern appearance, it also offers twice the space the old format had.

“This allowed for more staff space, which was needed, but more importantly, it allowed us to separate our meeting rooms and classrooms,” Shaw explained. “Previously, we had one room, our boardroom, which was used for training and meetings.

“We also now have a new and improved physical presence that allows for us to host senior government officials and politicians at a facility, which represents our association members much more professionally.”

Prior to the renovations, the lack of space not only limited the MTA’s ability to meet with its members and committees, and restrict what it could offer in the classroom, but a boardroom configuration was also not an ideal setting for classroom instruction.

The MTA’s ability to train staff in its new pair of classrooms has been enhanced significantly.

“We trained in one day more people than we used to train in a week in our old facility,” said Shaw, adding that the MTA generates revenue, often from non-members, from some of its classroom offerings, which helps the association serve its members and supplement their annual dues.

As for the RPM program – which provides workplace health and safety services to the trucking industry in Manitoba – all member services are currently pre-paid, and demand is high for courses, which can now be offered on a daily basis.

With the RPM program being a large part of the need for the expansion, the MTA has hired more staff, who all required workspaces, to facilitate the service delivery of the safety program.

In addition to providing a superior facility with space for staff, the MTA said its doors are open to its members.

“The building doesn’t exist simply to house MTA staff, it belongs to our members and we encourage them to use it accordingly,” said Shaw, pointing out that multiple members have used the facility as a remote office space. “For some of our non-Winnipeg based members who find themselves in Winnipeg needing meeting or presentation spaces, they are welcome to use the facility.”