According to Fuel Transport, at the Festival of Creativity in June, Fuel won four Lions (which represents the highest award in design in the world) for its new design. It received on Silver Lion for creation of a new brand identity and three Bronze Lions for logo design, brand collaterol and video/moving images. 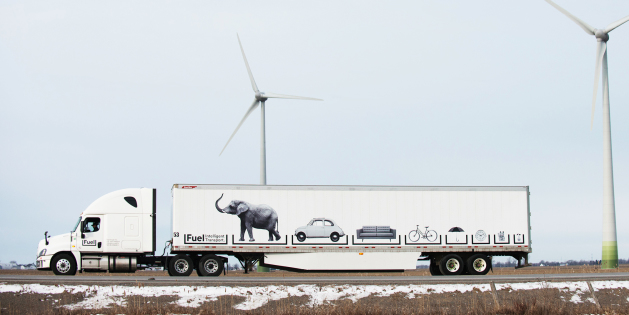 The new corporate identity not only introduced a new logo, website and blogging platform, but it also saw the transformation of Fuel’s office space, communication tools, and launch of a new ad spot.

“Building a strong, clear and distinctive brand-led culture is a key priority for us”, declared Robert Piccioni, president and CEO of Fuel Transport. “We believe that aligning our corporate values with our brand identity in a simple and powerful branding will help us grow. We believe that if Fuel’s culture and brand are driven by the same purpose and values and if we weave them together into a single guiding force for our company, we will win the competitive battle for customers and employees, future-proof our business from failures and downturns, and produce an organization that operates with integrity and authenticity.”

The change in identity has transformed Fuel into a brand-led culture that embraces the distinct vision and leverages the unique approach to the industry, the company claims.

“Inspired by the shipping container as the core building block of transportation, the identity features a simple and adaptable graphic container. It grows and shrinks to hold what’s contained within it and was used to create a dynamic visual device that can scale with the wide variety of objects Fuel transports daily,” said Jeffrey Dasilva, executive creative director of Sid Lee, the creative agency mandated by Fuel to support them.