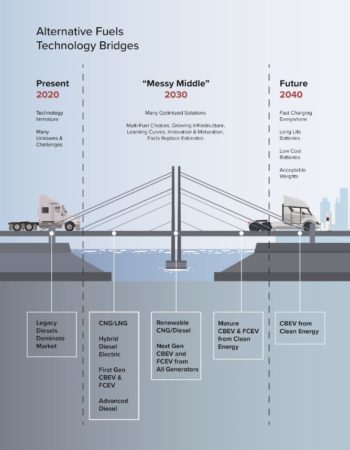 NEW YORK, N.Y. – Electric powertrains are going to dominate the market in the long run, but there will be a “messy middle” until full electrification of trucks, a report said Tuesday.

The projection was contained in the fourth Guidance Report on Electric Trucks released by the North American Council for Freight Efficiency.

“In the long run, electric powertrains will dominate the marketplace, but as the transition occurs, some technologies will bridge the present and the future, a period described by NACFE as the ‘messy middle,’” the report said.

Mike Roeth, executive director of NACFE, told a news conference later Tuesday that some of the “messy middle” options will enable a quicker electric future, while others might actually delay it.

For instance, Roeth said, the diesel-electric hybrid powertrain could accelerate full electrification. On the  other hand, an expanded use of natural gas will not be so helpful.

Still, Roeth is hopeful of a quicker electric future.

“We have high confidence that in a couple of decades, moving freight with electric or hydrogen fuel cell trucks in a zero-emission mode is very possible, and probable.”

The report said that a future zero-emission freight world will have only electric-based vehicles, powered well-to-wheel from truly renewable sources, such as hydro, solar and wind.

In other findings, the report said:

“With growing levels of goods movement and increased pressure for cleaner transport, trucking is facing growing demand for near-zero or zero-emission solutions,” the report said.

“As a result, the list of alternative fuels and related powertrains is growing, and these technologies are beginning to reach the point of production-quality vehicles.”

Roeth urged fleets not to delay engaging with the new technologies.

“By exploring the use of these technologies and adopting where possible, they will help optimize these technologies for their own duty cycles and applications and take advantage of all the benefits of the various choices,” he said.

NACFE is an organization dedicated to improving freight efficiency in North America.