NEW CARLISLE, IN – Backed by a new family of products and a robust economy, Navistar executives are clearly feeling positive about the future.

Those new products include the LT linehaul tractor, its RH regional hauling counterpart introduced at the Expocam trade show in Montreal, the heavy vocational HX tractor launched last year to replace the PayStar, and the new HV that replaces the WorkStar. The HV was unveiled at the recent North American Commercial Vehicle Show in Atlanta, Georgia.

The HX itself represents a market segment that Navistar saw drop in half after it stopped producing 15-liter engines. “Our [13-liter model], because it was an EGR engine, we couldn’t cool it at some of the power and torque ratings we needed,” he said.

A little over five years later, though, Navistar says it’s back in the business. “We’re picking up share,” Mooney said, noting that three HX models were entirely new entries in the marketplace. “In the vocational segment, if you don’t have the features, if you don’t have the power and torque, they’re not buying the truck,” he said.

Heavy vocational trucks represent a relatively small market compared to the sales volumes of linehaul tractors, but the segment is growing on news of booming construction and even improving sales in the oil and gas sector. 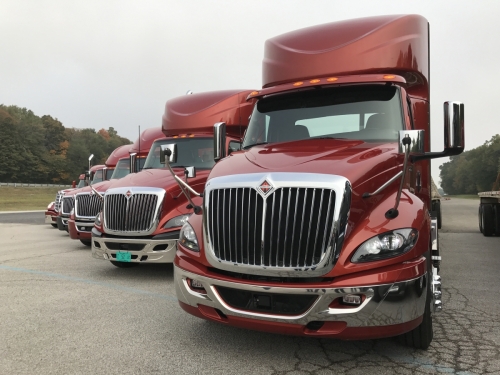 “It’s not a share play. It’s more of a profit play. These are high-margin trucks. The volumes are way higher in on-highway, but the margins are much thinner,” he said.

With just three weeks left in the company’s current fiscal year, Navistar is bullish on the economy in general, said Jeff Sass, Navistar’s senior vice president – North American truck sales and marketing. The company’s North American Class 8 market share inched up about 0.5%, with the share of medium-duty trucks up 3% in 2017.  “I see the economy being very strong. I see the freight rates going up. I see the number of loads going up,” he said.

Still, there are challenges to come – specifically in the form of Electronic Logging Devices, which as of December will be mandated for carriers operating in the U.S. Overall productivity is expected to drop 8-12% at first, and then level out at a drop of 3-5% once the rollout is complete, Sass said. “Those are the fleets that were running clean in the first place.”

It could influence the market for used trucks, too. Half of U.S. freight is hauled by a truck operated by its second or third owner, Sass said, predicting further consolidation in the truck market to come. “Most of those second or third owners have not implemented ELDs yet.”

“We know there’s a driver shortage in the industry, but we have really, really tried to make these products [the type of] products drivers want to drive,” Mooney added. “If the drivers like our trucks, the fleets are going to buy our trucks.”

Driver-centric features include disc brakes that are less “grabby” than drum designs, he said. “We made disc brakes standard on the LT in June of this year, but we also saw the take rates come up.”

Other technologies have been making gains of their own. Take rates for collision mitigation systems are up 50%, while the sales of replacement bumpers and fenders has reportedly dropped.

Predictive cruise controls that adjust speeds and gears based on readings of topography have also seen take rates rise to 15%. The latter system, launched just over a year ago, is delivering “real world” fuel economy gains, Mooney said.

The biggest technological shift, though, has come in the form of Automated Manual Transmissions, which have seen take rates rise above 70% compared to about 40% of trucks sold just two years ago. “It was one of those technologies we knew made it easier for drivers to drive trucks,” Mooney said.

The company’s proving grounds are playing a key role in enabling new technologies, he added, referring to the facilities purchased 2.5 years ago, close to the manufacturer’s Chicago-based engineering teams. Half the trucks that run the three-mile, three-lane oval, are even made by other manufacturers. That is keeping a team of 75 employees running seven days a week, three shifts a day.