WINDSOR, ON – Both Canadian members of the Windsor-Detroit Bridge Authority (WDBA) and United States’ representatives of the Michigan Department of Transportation (MDOT) were on-hand Wednesday to ask members of the media to use their imaginations to get the full picture of their expansive vision.

The WDBA gave a technical update and showcased key locations for the Gordie Howe International Bridge, which aims to connect the Rt. Hon. Herb Gray Parkway – the Windsor extension of Ontario Highway 401 – and Interstate Highway I75 in Michigan, to add another port of entry to the busiest Canada-U.S. border crossing.

Set to be one of the top five longest bridges in North America once completed, the vision for the bridge includes two huge plazas – one on each side of the border – with 36 inspection booths, of which an estimated 18 will be dedicated to commercial vehicle use.

The project also plans to feature staging areas with facilities for commercial vehicle drivers in between the primary and secondary checkpoints.

Although the U.S. side of the bridge won’t feature a duty-free shop, or other amenities for those making the crossing, the WDBA says the addition of a shop or other faculties like a place to grab food or a coffee would be part of any package chosen through the on-going Request For Proposals (RFP).

Looking for a private partner to help design, build, and maintain the bridge, the WDBA announced in August that the RFP process was being extended by four months, saying Wednesday it was a practical decision that benefited both the WDBA and the applicants – which have been narrowed to three firms, from six original applicants.

The extension of the RFP also extends the financial close of the project to September 2018, meaning the WDBA said it cannot confirm a completed design, cost, or timeline for the new bridge.

Some of the work required to prepare for the bridge has gone ahead, with CAN$350 million having been spent already to clear away existing roads and structures; add pumping, drain, and stormwater management to the area; relocate hydro lines underground; relocate some species of plants and animals; and add nearly one million tons of fill to the Canadian side, to bring the elevation up almost nine meters to meet the Herb Gray Parkway.

Although it’s known the new structure will be a toll bridge, with tolls collected on the Canadian side, the cost of tolls also won’t be known until after financial close.

The WDBA said the conversation around tolls has included automated tolling and fleet billing, among other methods, but right now it’s just talk. The collection of tolls and maintenance of the road is part of the RFP submissions. 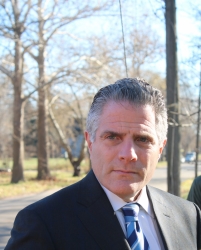 The tolls are being collected entirely on the Canadian side of the bridge because that is where the funding is coming from. The U.S. partners aren’t putting a single dime towards the project, said Special Projects Advisor to Michigan Governor Rick Snyder, Andrew Doctoroff. Even the mounting legal bills to acquire the needed land for the project are being paid for by this side of the Detroit River.

Doctoroff and MDOT representatives said they have effective control of 93% of the land they need for their side of the bridge. More than 80% of that belongs to the state free and clear, while the remaining 13% have outstanding court orders for tenants to be evicted in a reasonable time.

For all of those properties Doctoroff says the tenants have been offered a good price for their homes or businesses, as well as relocation services and other help. Tenants need only provide evidence of a lease for what Doctoroff called safe, sanitary, and decent housing before Michigan will issue them a check.

Resident Steve Toth of the Delray area of Detroit, where the bridge is expected to link to the American side, sees the services being offered to him and other members of the community a little differently.

Toth says the relocation services offered to him amount to websites and other information downloaded off the internet, while the payment of $53,000 dollars he said was promised to him, won’t help him find a new place to live if he has no money to cover up-front moving costs.

Toth says instead of the help he’s asked for he was served an eviction notice the day before the recent American holiday. “The bailiff told me to have a nice Thanksgiving,” he said.

The South Crawford Street resident says his family has been in the home since 1941. Fighting Michigan on the move is proving difficult for Toth.

“I can’t find a lawyer to take the case. I have to do everything myself because the lawyers tell me it’s a losing proposition down here,” he said.

Doctoroff says the state is aware of Toth’s situation, and they have offered help, but have been refused. He said Toth is not a homeowner, as far as he’s aware, and the offer of $53,000 was made to him as a tenant in the neighborhood.

“I can’t tell you how many services have been offered to Mr. Toth to make sure he is treated well, treated effectively,” he said. “He’s a single example of a homeowner who has not being willing to cooperate with us. The fact of the matter is, he’s been offered a sizable amount of money as a tenant to relocate.”

Doctoroff says the total amount given to residents to relocate is now in the tens of millions.

“The number is going to be increasing if not… exponentially, then very quickly because we’re getting to the part of the project where we’re going to be paying people for their businesses. As you can imagine, those payments are normally significantly larger than payments made to residents or tenants.”

Toth isn’t the only Delray resident fighting the state’s appropriation of the land. While Doctoroff says 600 of the 636 parcels of land needed have been acquired, 20 parcels of land yet to be obtained are currently the subject of a case before the Michigan courts.

Located across the street from Historic Fort Wayne, immediately in the path of future ramps onto the American plaza, is Central Transport. The company is owned by Manuel Moroun who also owns Detroit International Bridge Co., the company that owns the current and new Ambassador Bridge.

The bridge-owner has filed several suits opposing the WDBA project, including one challenging the legality of the Gordie Howe bridge which was dismissed in August. Moroun’s suit challenging the expropriation of the 20 parcels of land, including those occupied by Central Transport, still has to be adjudicated, but Doctoroff isn’t worried about the outcome.

“We will not lose. We will not lose because we understand the law and we have been successful with great regularity,” he said. “We’re very confident in our legal position going forward.”

If the plaza replaces Central Trucking and the other buildings in the Delray neighborhood, it will be one of the largest in North America – even larger than that proposed for the Canadian side – occupying 148 acres of space. Attaching directly to highway I75 north- and south-bound through three kilometers of interchange ramps, the WDBA says the crossing may be ideal for longer haul drivers looking to connect with a direct path to Florida or other areas.

The bridge will also feature a cyclist and pedestrian crossing, something both the WDBA and MDOT say has been high on users’ wish lists.