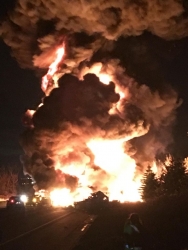 BARRIE, ON – Three people are dead, including a 10-year veteran of the trucking industry following another collision involving commercial motor vehicles (CMVs) this week, and Ontario Provincial Police (OPP) Commissioner Vince Hawkes says he will do whatever it takes to stop these crashes from happening.

Names of the victims have not been released by police, however North Bay driver Benjamin Dunn, 37, was confirmed by his wife to be one of the victims in Tuesday night’s pile-up on Ontario Highway 400 between highways 88 and 89, reports Global News.

In the late hours of Oct. 31, 40-foot high flames engulfed the stretch of road south of Barrie as drivers from 14 vehicles, including those from five heavy-duty trucks, scrambled for their lives, said Hawkes. Two fuel-tankers were among those caught in the chain-reaction crash, causing the resulting explosion.

Hawkes says driver inattention was the cause of the crash, which occurred when a truck didn’t slow down in time to avoid hitting traffic that was stopped while crews cleared a single-vehicle collision that had occurred about 40 minutes before.

The first single-vehicle crash involved the driver of a car hitting the guard rail, Hawkes said. He was later found to be under the influence of alcohol.

Coming less than a week after OPP said they were devising a new strategy to deal with distracted and unsafe truck drivers, the collision shut the highway down for more than 24 hours while crews worked to get the scene cleaned up.

Hawkes said in 30 years of policing he has never seen anything like Tuesday night’s crash.

The collision occurred at the bottom of a hill with clear sight-lines, Hawkes said, indicating there should have been no reason drivers couldn’t stop in time to prevent the collision.

Hawkes said drivers’ Hours of Service, fatigue, hand-held devices, the pressure of just-in-time deliveries, and cost-pressures downloaded onto to drivers were all factors causing truckers to be driving while tired, over-worked, and inattentive, creating unsafe conditions.

“These trucks are in essence missiles, travelling down these highways,” he said. “You can have all the technology in the world, but if that driver is still distracted, whether they’re watching television, or they’re texting, or they’re eating a sandwich, and they’re not paying attention to the road, when the traffic is stopped ahead, then the devastation is going to happen, because they cannot stop those vehicles.”

Hawkes said even though all types of drivers operate vehicles while distracted, the weight of commercial vehicles makes them deadlier, saying only 12% of collisions involve CMVs, but 25% of fatal accidents involve trucks.

Hawkes recognized that the slowdowns created by road clean-up can often result in devastating secondary crashes, saying any new strategy to reduce the number of crashes will also have to include a plan to clear highways faster.

“There’s no one solution to this,” he said.

Hawkes said modern trucking companies are using technology like sensors, telematics systems, and automatic braking to help combat the issue, but older trucks don’t come equipped with those kinds of tools. He said for some companies there may be a cost barrier associated with adopting those technologies. He also said police find older trucks that need to be taken off the road in every enforcement blitz, and that it may be necessary to look at putting more of them out-of-service if it will keep road users safer.

The OPP have formed a committee with the Ontario Trucking Association and the Ontario Ministry of Transportation to discuss issues of safety and CMVs. The committee will be meeting soon, and Hawkes says the police will continue to work with the government and industry partners to create the best possible strategy for all involved.

The OPP are urging drivers that see CMVs operating unsafely or in a distracted manner to call 9-1-1.

“We’re going to continue to do this, no matter what it takes. And if we can save one life, it’s worth it,” said Hawkes.