On the road to a new career

February 23, 2016
The Gordons now campaign for others to follow suit after entering trucking as a second career

MUNDARE, Alta. – Kelly and Laurie Gordon did it 16 years ago, and they say you can do it too.

The couple, who live on an acreage east of Edmonton, made the decision to become full-time truck drivers when they were unhappy with the direction their careers were taking them and decided to steer a different way.

And since that day in 1999, neither has looked back.

Despite his love of driving and the trucking community, Kelly said he is concerned with how the industry attracts new drivers, and believes that for the right type of person, trucking could be the perfect fit.

“Because of what’s going on in the economy, in Alberta in particular with a lot of people out of work,” he said, “I thought it was important to give insight into the fact that this can be done.” 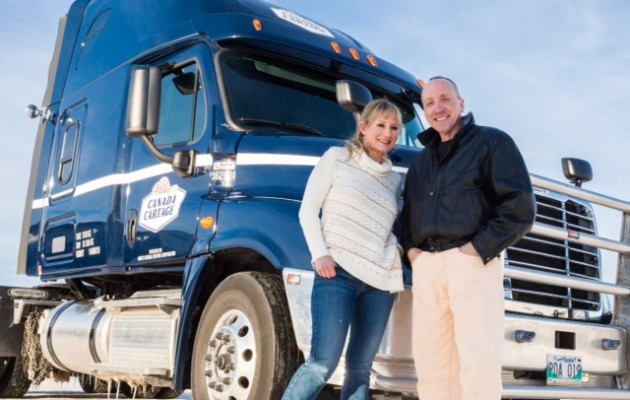 Making a career change to trucking 16 years ago, Laurie and Kelly Gordon haven’t looked back.

Kelly studied journalism at the British Columbia Institute of Technology and worked in media relations for Edmonton Police Services and Edmonton airports. Like most parents, Kelly’s wanted him to go to post-secondary school and as he put it, ‘be somebody.’

Kelly grew up in Kitimat, B.C., where he drove in a logging truck for the first time and fell in love.

“I’d drive by trucks and look at them and wonder what it’s like to be in there,” he said.

When Kelly met Laurie, the couple had a tradition where every now and then each took a turn purchasing something ‘extravagant’ for themselves, and being his turn, Kelly made the choice in 1999 that they get their Class 1 licences.

“It wasn’t to make a career of it, it was just something to do that I had always wanted to do as a kid, and I just wanted to see if I could get it,” Kelly said. “I never thought I’d get the licence.”

The rest is history.

Now the couple, who drive for Canada Cartage Systems, hopes the next crop of drivers is eagerly waiting on the horizon, but Kelly is concerned with how the industry is attracting these new drivers.

“This industry can be its own worst enemy when it tries to recruit,” he said, “and trying to pull this industry together into one unified voice is just about impossible.”

Kelly said he was listening to a trucking radio station and was taken aback by the negative issues being discussed on the show, which he feels would do nothing but drive potential drivers away.

“To me, that is not representative of the industry,” he said, “and I think there’s a lot more positive things to be said about it.”

Kelly said that when it comes to trying to attract the next generation of drivers, pop culture and the media tends to promote the industry with stereotypical images of what a truck driver is, and fails to appeal to the diverse range of people who may be looking at driving as a career.

“It you’re going to attract the next generation of drivers you’ve got to show more sides to the industry,” Kelly explained, “and that it can be hip, and that young people can find this very attractive.”

Kelly also said he often hears of complaints that drivers ‘can’t get enough miles, they’re mistreated by dispatchers and they can’t make money.’

“We’ve been doing this 16 years,” he said, “and we’ve never experienced any of that, none of it. In fact, we are making the most money we’ve ever been making in our lives. I don’t know where that is coming from. I just tend to believe that that’s not as prominent you might think it is if you listen to certain radio shows or read certain magazines.”

Kelly does admit that there’s one sacrifice every driver must make.

“If you’re looking for the stereotypical lifestyle,” he said, “if you want to be nine-to-five and you want to go and drink beer and play darts with your friends on Tuesday nights and play hockey on Thursday, that’s likely not going to happen. If you want to see North America, and really get a lot of perspective on what Canada and the US is all about, really see nature at her best and worst and get yourself tested, this is a great place to do it.”

Kelly said his and Laurie’s integration into the world of trucking went fairly smoothly, and that anyone with good people and listening skills could thrive in the industry.

“We’re very atypical truck drivers, Laurie and I. We don’t look like truck drivers, we don’t have typical truck driving backgrounds,” Kelly said. “We’re a couple of white-collared people who just wanted to spend the best time of every day together instead of being apart and coming home and giving each other what we had left, which seemed kind of pointless to be married if we were going to do that. You meet such a diverse, interesting group of people out here. There are people out here who have PhDs, who are journalists…they are from every walk of life…lots of retired law enforcement officers. There’s an undercurrent of drivers in this industry who are very atypical, you just don’t get to hear about them very often.”

Other than the obvious – loving to drive – Kelly and Laurie said anyone looking to get into the trucking industry should first get properly trained.

“Don’t learn from your boyfriend or husband, go to a great school,” Laurie advised. “I can’t say that enough. Spend the money and get the proper training.”

Kelly said anyone with a penchant for shop and engines, operating a truck is a great place to be.

And Laurie, who was a server at Chateau Lacombe’s La Ronde restaurant in Edmonton prior to getting behind the wheel, said women have nothing to fear.

“It is definitely a male-dominated profession, probably with 90% men,” she said.

“Driving is driving, it doesn’t really matter how big you are or if you’re female or male. It’s nothing to be afraid of, really, driving isn’t really that hard. It takes a bit of practice and you’re going to be really good at some things and not so good at others, and you’re going to have good days and bad days. It’s pretty scary at first…it’s pretty intimidating, but it’s just like anything.”

“This industry can appeal to anybody and it doesn’t matter what walk of life you come from,” added Kelly. “Why not go and try it? What do you have to lose?”

4 Comments » for On the road to a new career