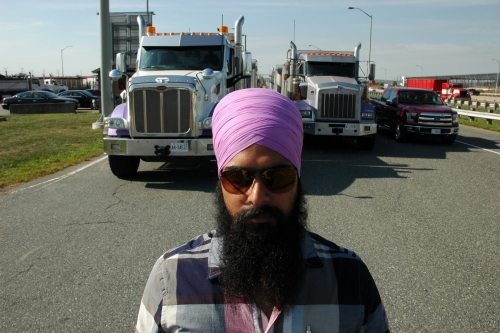 MILTON, ON – Aggregate haulers who have been occupying Ontario Ministry of Transportation scales and the routes to Toronto-area gravel pits since Tuesday are ending their protest with the promise that a hard line on axle weights is — at least temporarily — coming to an end.

“The strike is over now,”  Jagroop Singh Bangli, one of the key organizers of the strike action, told Today’s Trucking.

Dozens of protesters, who had organized their job action at a Brampton Sikh temple last Friday, were responding to an August change, when enforcement personnel ended four years of a softer approach on the province’s Safe, Productive and Infrastructure-Friendly (SPIF) rules for weights and dimensions. The protesters have been asking for a focus on gross weights rather than axle-specific weights.

The concessions will hold in place until extensive consultations with representatives of every related party, including the aggregate suppliers themselves, Bangli says.

“In the short-term, effective today, the ministry will conditionally return to the enforcement regime that was in place prior to August 1, 2016. This includes enforcement of allowable gross

weight limits beyond pre-set tolerances and thresholds, and the detention of vehicles found to be grossly overloaded. Vehicles will not be permitted to operate above manufacturers’ Gross Axle Weight Ratings (GAWR), Gross Vehicle Weight Ratings (GVWR), or Tire Load Limits. That return to Phase 1 will continue until discussions have finalized with the various groups involved and that industry and government have reached a joint solution,” Transportation Minister Steven Del Duca said in a statement on Saturday. “Additionally, I will be meeting representatives of all organizations, in my capacity as Minister, to hear more about [the protesters’] specific issues and to ensure we hear the full range of opinions and views on this moving forward.”

Protesters began parking their equipment at 2 a.m. on September 20 in the facility adjacent to the eastbound lanes of Highway 401 near Trafalgar Road in Milton, Ontario. Others parked in two other ministry scales, while taking their private vehicles to quarries in Aberfoyle and Dundas, Ontario. The action reached a peak earlier on Friday, with traffic slowdowns along Highway 401 in the western Greater Toronto Area.

Now they’re all back to work.

“The Ontario Trucking Association wants the province to implement an enforcement system that will hold all members in the supply chain accountable for the overloading of vehicles, including those loading the vehicles and those owning and operating them,” says Stephen Laskowski, president of the province’s largest trucking group.

“Most carriers are compliant members of the business community and most shippers are committed to following the rules,” he added. Including those that legally move aggregates today. One way to improve compliance would be to enforce shipper liability laws and implementing new contractual requirements for suppliers bidding on government projects, he said.

But the protesters found supporters in groups including the Greater Ottawa Truckers Association and the Ontario Stone, Sand and Gravel Association.

Protesters who met with Ontario Ministry of Transportation representatives on Friday expect follow-up meetings within a couple of weeks.

“We really want to be thankful to everyone that has supported us,” Bangli said. “Let’s see what’s going to happen now.”

– This updated version of the story includes a statement from Transport Minister Steven Del Duca, and from the Ontario Trucking Association.