WHITBY, ON – The cars and pickup trucks have been coming and going all morning at Cam-Scott International, and they’re bringing cargo with them.

The Toronto-area fleet used social media to share an offer to deliver relief supplies to Fort McMurray, Alberta residents displaced by fire. And the response began within hours. It’s come in the form of brand new baby clothes, still on the hangers, blankets and more. 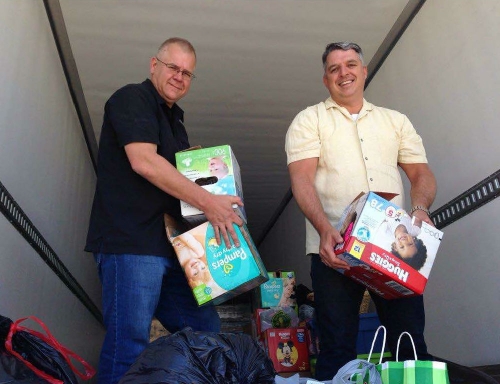 By tonight, the first load will be heading to a warehouse in Edmonton, adding to the fleet’s regular weekly Alberta-bound shipments.

“Alberta has been good to us over many, many years,” says fleet president Glenn Weddel. “It’s a great opportunity to help and give something back to them in their time of need.”

It is the latest example of industry support offered in the last couple of days. The trucking industry has already responded with donations from associations including the Canadian Trucking Alliance, Ontario Trucking Association, and Alberta Motor Transport Association. The Mullen Group reports that Alberta employees and families have opened their homes to those in need.

Now the wheels are rolling as the industry begins moving much-needed supplies to the region.

Cam-Scott contacted the Red Cross, which connected them to relief organizers and a warehouse at Edmonton International Airport.

The idea to collect supplies came from vice president Jan Holtzheimer’s daughter, who said she wanted to do something. Anything. “I said, ‘OK, see what you can do,'” he says. At first, he instructed the team to clear a couple of spots on an Edmonton-bound truck. Then the community began to respond to her facebook post. There’s been a steady stream of donations since 8:30 am. The first loads were piled on the dock. Then they moved a trailer to the front of the yard.

There will obviously be more loads to come.

The fleet had delivered supplies in the wake of disasters like ice storms, but this effort is clearly tapping into a spirit of generosity. “It’s something amazing. Something we never predicted. But we’ll support it as long as people bring us stuff and [Fort McMurray has] the need,” says Weddel.