BARRIE, Ont. — Even though they work for different companies in different parts of the province and drive different classes of trucks, the winners at the provincial finals of the Ontario Truck Driving Championships (OTDC) have one thing in common: they’re all nice guys.

That’s how OTDC president Ewen Steele describes the victors, adding they’re a “humble bunch,” despite having proved themselves as the best drivers in the province. He says having a winning attitude on the course doesn’t just happen. It’s something the drivers practise on a daily basis.

“That’s the thing I have always been amazed at. There are no arrogant cowboys that stand on that stage because they can’t get there. You can’t perform on that level if you are an arrogant cowboy. These guys know they’re good, but in a most Canadian way,” said Steele.

But it’s not just the winners who exemplify that attitude. According to Steele, any of the 67 drivers who competed in Barrie, Ont. in one of five separate classes (straight truck, single-single, single-tandem, tandem-tandem and B-train) had a shot at walking away with titles since all had earned their spots at the provincial final by having a top-three finish at a number of qualifying events held around the province, including the Central Ontario Truck Driving Championships and the Toronto Regional Truck Driving Championships.

It’s an attitude that Steele says fleets should recognize and encourage, especially since it’s good for the bottom line.

“That’s the big challenge—getting fleets to identify the opportunities for saving money. Rodeo participants don’t have collisions [in order to compete, participants must be free of at-fault accidents for the proceeding 12 months.]

“People who are striving to drive with that kind of precision don’t turn that on and off, that’s how they drive every day. They are like surgeons with their vehicles. They place the truck on the road all the time, that’s why they do well on the course. Somebody who just lets the truck go down the road cannot compete at this level. You get that level of precision out of a driver every day of the year. It’s hard to quantify—it’s hard to measure these things, but folks that participate in rodeo simply are your best drivers, regardless of whether they bring home hardware.”

But there certainly was hardware handed out during the post-competition banquet. And while there were some new faces who appeared on stage to collect their trophies, there were also a number of drivers who should be very familiar to Truck News readers and trucknews.com viewers. Leading up to the provincial finals, the Truck News team profiled some past champions who were favourited to repeat as winners, and a high percentage of them did just that. 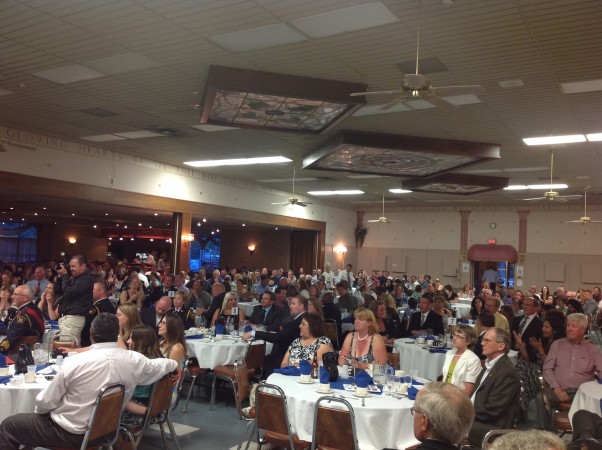 The straight truck class was the first to be recognized, and it was the first to feature a profiled driver. Erb Group of Companies driver Stew Jutzi has been both a provincial grand champion and the winner of the straight truck class at the Canadian National Truck Driving Championships. This year, during his qualifying run at the Central Ontario Truck Driving Championships in Cambridge, he offered a trucknews.com videographer a ride in the passenger seat, so that viewers could get a sense of what it’s like to be out on course.

Jutzi continued his winning ways by earning first place in the straight truck class. Afterward, he told trucknews.com that he didn’t think the run was particularly good.

“I actually didn’t think I did that well. But there are some things out there that you don’t see. You don’t see measurements, so you don’t know how well everybody else is doing.”

The next class up was the single-single, and it was another victory for a trucknews.com profiled driver. Clary Ward, who drives out of the Hamilton terminal for Con-way Freight, also has victories at both the provincial and national level under his belt. In fact, during the last four provincial championships, he has earned three titles, and he added to that number this year, as he was named winner of the single-single class.

Ward wasn’t really expecting to win the class, saying, “I didn’t think I had a really good run. The whole course overall was very tight, very squeezed down….They made it very challenging for us.”

The third title of the night was presented to the winner of the single-tandem class. Kerry Ellsworth, who drivers for Reimer Express Lines, had never competed at the provincial level before.

“I’m always nervous. I just went there and gave it all I could and got through.” In particular, he found the alley dock obstacle especially challenging.

Two-thirds of the top three finishers in the tandem-tandem class were also drivers that should be familiar to trucknews.com readers. After winning rookie of the year, tandem-tandem and grand champion honours at the Central Ontario Truck Driving Championships, Derek Sumsion of Challenger Motor Freight, said he was going to take a measured approach around the timed course in Barrie.

“My theory with the time is you’ve got to get good before you get fast. Once again, I would rather not hit any obstacles and run out of time, than I would race around and drive over everything. To me, this is not a race. It is a competition on accuracy.”

While it may not have been a race, Sumsion took third in the class at his first provincial meet.

The winner of the tandem-tandem division was Preetpal Nijjar. Nijjar will be taking another trip to the Nationals, having placed second in his division in 2011. A past rookie of the year and division title winner at the provincial level, Nijjar said competing isn’t any different than just driving for work.

In addition to winning the division, Nijjar won a second award as well: he scored the highest points of anybody in the competition, on a day when the course was especially difficult.

“High score for the day was only 407 points, which is a testament to the skill of the course marshals. They put together a pretty tricky course for the drivers and the scores reflect that. Depending on the course you’ve got, the high score can drift 75 points higher,” explained Steele.

Dan Congdon of Reimer Express Lines a past master of the tandem-tandem class decided to try something new. Up for a challenge, the veteran competitor entered the B-train division this year. He earned a spot at the provincial finals after winning at the Toronto Regionals driving at an “incredible pace, effortlessly guiding a set of trains through the course as though they weren’t there at all; even through the tricky cloverleaf section that gave most of the other competitors fits,” according to editor James Menzies. While his run in Barrie wasn’t quite as compelling, it was strong enough to earn Congdon third place in the class.

The winner of the class, Tim Horton’s Aaron Kershaw attributed his victory to experience, saying it came down to “many years of driving and practice. A few different competitions and just being out on the road with lots of vehicles, doing lots of runs, you get lots of practice running the trains.”

He also singled out the alley dock as the most difficult obstacle on course.

Rookie of the year honours went to first-time competitor Bruce Lambert who drives for Martin Brower. According to Lambert, the key to winning was preparation.

“I did a lot of studying. I was just fortunate with my job we do a lot of very tough driving. It’s like the competitions. And I just hoped for the best.”

While Shawn Matheson didn’t have the type of run he wanted to in the tandem-tandem class, the Home Hardware driver, who has competed in the Nationals three times, earning the grand champion title in 2012, certainly proved he knows how to be safe behind the wheel. Prior to competing in the regionals, he told Truck News, the pre-trip inspection makes him nervous.

“Being with the MTO officers and doing the pre-trip, I know it’s a little intimating because they’re standing their with their clip boards, and they’re the law, but they’re just there to help you along too. If you find the defects, it’s a pretty good feeling when they tell you you’ve got them all. That’s hard to do.”

It certainly didn’t appear hard for Matheson, as he took home the MTO safety award and tied with Dan Congdon as co-winners of the pre-trip inspection test. Both had perfect scores and found all the defects.

Besides honouring truck drivers, the OTDC also recognized a trucking company executive. Dennis Shantz,who received the Bill Russell Award for service to Truck Driving Championships, is the director of fleet services for Home Hardware Stores Ltd. He is also a strong supporter of the Driving Championships. As he told trucknews.com in a video interview, the company sends its trucks and trailers to the regional and provincial competitions, and its employees serve as volunteers during the events.

The final award of the night was the presentation of the grand champion ring and trophy, and the first winner called to the stage was recalled to collect his hardware. Straight truck class winner Stew Jutzi earned the title by having the highest differential between his score and the average score of the class.

The five truck class winners will now head to the Nationals in Quebec as Team Ontario, and Steele expects them to do well.

“Look out Canada, here we come.”