NIAGARA FALLS, ON – Roads and highways can be a dangerous place. The World Health Organization says there were about 1.25 million road traffic fatalities around the world in 2013, notes David Gaskin, a loss control specialist with Aviva Canada. Canada records about six such fatalities per 100,000 people. 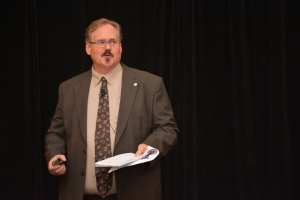 Granted, trucks are still relatively safe against this backdrop. Of the fatal collisions involving heavy vehicles, the truck drivers were driving properly 75% of the time, according to the 2013 Ontario Road Safety Annual Report. About 20% of the fatal crashes involved the trucks alone.

But fleets still need to prepare for the worst.

“If you’re out on the road enough, that will happen to you,” Gaskin told fleet managers during the annual meeting of the Private Motor Truck Council of Canada, warning about personal injury lawyers who are lying in wait. One recent Michigan ruling upheld a US $22.6 million injury verdict after a driver was hit while conducting a pre-trip inspection. “Not all of them will be that big. The problem is, one of them might be,” he said.

It’s why Gaskin stresses the need to prepare for the worst, establishing a “progressive response plan” that defines steps to be followed throughout an organization after a collision occurs.

Such a plan should address everything from routine collisions to catastrophes, and mesh with existing business continuity programs, he said. Anything involving an ambulance or tow should be addressed as if it’s potentially a major incident; occupied vehicles should be treated as potential bodily injuries.

Drivers at the scene will all play a role in such a plan, helping to preserve evidence and take pictures of the driver’s licences of those involved. “Anything unexplained is an excuse for other parties to assume the worst,” he said, referring to the danger of missing evidence.

“These days, there’s a lot of data,” Gaskin added, referring to Electronic Control Modules, Electronic Logging Devices, dashcams and cellphones as a few examples. Each could help to solve the mystery behind a collision. Vehicles involved in a crash should be towed, with the Electronic Control Module immediately downloaded, he said. And every piece of information needs to be made available immediately. “If you withhold that evidence … in Canada that evidence will be ruled inadmissible,” he said.

The level of police investigations can vary from one jurisdiction to the next, however, so Gaskin also stressed the need for company officials or adjusters to rush to the accident scene to collect information. “Damage control starts at the scene, and your investigation may be the best one that happens,” he said.

But the investigation that follows should also look at root and “proximate” causes. If the collision was caused by a truck making a left turn, there’s still the question of why that turn was being made. “Was he late?” Gaskin asks as an example. “Look at the whole system that led to the vehicle being in that position.”

“Determining preventability is not a bad thing – especially if you use it as a basis for retraining,” he said. “Think of a major accident as the ultimate ISO audit with substantial financial penalties.” The question is, will the hiring, maintenance, management and supervisory strategies stand up to scrutiny.

Staff at every level of the organization, meanwhile, will need to know their responsibilities, understand not to volunteer information, know how to direct inquiries, and who can offer direction.

Each step also needs to be documented along the way.

“If you didn’t’ write it down, it didn’t happen,” he says. “[And] anything you don’t monitor probably will hurt you.”

“It can threaten the survival of the organization.”