BRANTFORD, ON — Richard Ross is fond of saying that he’s been in trucking for 58 years. If you saw him at his recent retirement party here, and then did the math, that number would seem very wrong. Not so.

Just retired as vice president of sales, trucks and trailers, at Carrier Centers based in Woodstock, ON, the affable Ross isn’t as old as a 58-year career implies. The thing is, he started when he was a 10-year-old boy in England, working in his father’s truck repair business on Saturdays and most evenings. And he’s still smiling. As he says, trucks get in the blood. 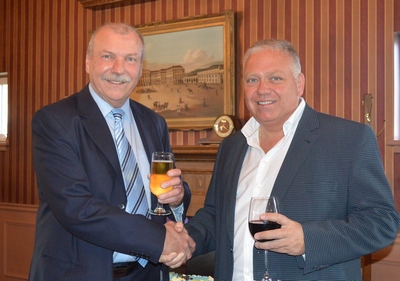 There was a lot of smiling at The Brantford Club as a couple of hundred friends gathered to wish Ross well. The glitterati in attendance included the likes of David Bradley, chairman of the Canadian Trucking Alliance and the Ontario Trucking Association, and Dan Einwechter, president of Challenger Motor Freight. Hosting the event was Rob Long, Carrier president and dealer principal.

Carrier, launched in 1960, is primarily an International dealership with eight southern Ontario locations including the Woodstock home base. It’s also a Doepker trailer distributor and a Carrier reefer dealer, among several other franchises.

Ross got his career in trucking going seriously after graduating from the University of Coventry with a business degree as well as a co-op degree in mechanical engineering.

From 1972 to 1983 he worked in sales for Volvo Trucks in England. Amazingly, two technicians from the dealership there were at his retirement affair. Muskie Patel and Jaspal Kumar hadn’t flown over for the occasion, rather they had coincidentally followed Ross to Canada and — unplanned — ended up working for him here.

Before he left England Ross had moved his way up the ladder and became sales director of Volvo Trucks UK. In 1983, he was shifted to Jeddah, Saudi Arabia, where he worked for six years as general manager for Volvo buses, trucks, and cars across the Middle East.

In 1989 he moved to Canada, still with Volvo, helping to establish the company’s dealership network before becoming president of Volvo Trucks Canada. In 1995 Ross left Volvo to launch his own business, Training Alternatives, providing internet-based training for the transportation industry. He ran the company until 2008, when he switched OEMs and became general manager at Harbour International in Vancouver. His Carrier career began in 2011.

Carrier boss Rob Long is generous in his praise for Ross:

“There’s a saying that goes, ‘Treat a man as he is and he will remain as he is.  Treat a man as he could be and he will become what he should be.’ Richard has exemplified this throughout his career,” said Long. “He has fostered many onto a path of success and professionalism in this industry, and at Carrier Centers.

“Richard has shown strong leadership in his strategic directions, and the level of trust and conviction he has expressed allowed all of us at Carrier Centers to weather some difficult times and grow stronger as a family unit and in the industry as a whole.

First on the travel agenda for Richard and Margrit is a leisurely cross-Canada road trip this summer.