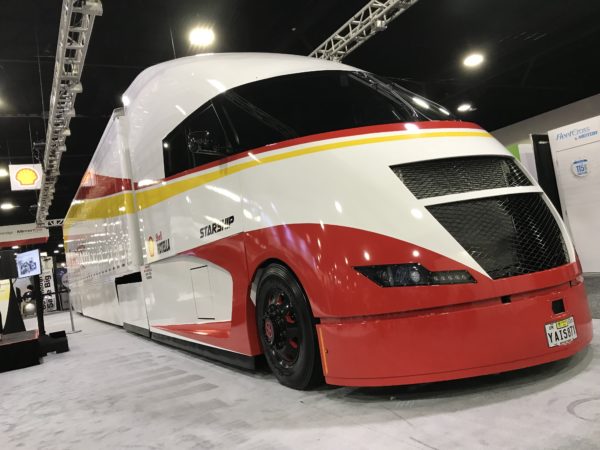 JACKSONVILLE, Fla. – The starship has landed and the results are in.

The Starship Initiative truck sponsored by Shell lubricants and AirFlow Truck Company finished its cross-country test drive of more than 2,300 miles (3,700 kilometers) on May 24, concluding the first journey a Class 8 truck of this kind has driven coast-to-coast across the U.S.

The test was conducted in real-world trucking conditions including facing torrential downpours as Tropical Storm Alberto made its way up the Gulf Coast in May.

Will a unique combination of fuel-saving design and technologies the truck reached a freight ton efficiency of 248 percent over the North American average, reaching 178.4 ton-miles per gallon.

Freight ton efficiency is a more relevant statistic for judging the energy intensity associated with moving cargo from point A to point B since it combines the weight of cargo being moved with the amount of fuel consumed.

The final cargo weight of the truck was nearly 73,000 lbs, with a payload of 39,900 lbs mad of up of clean reef material destined for a new offshore reef installation in Florida.

“The Shell team didn’t take the easy road to trying to achieve the best results they could with their first drive with the truck,” said Mike Roeth, Executive Director, North American Council for Freight Efficiency. “They knew they wanted to make the truck run, but they went a step further. They carried a much heavier load than many average truckers on the road carry, traveled a longer route in an uncontrolled environment with a variety of technologies not tested in these real-world conditions. For us, it was a rewarding opportunity to see the truck move from an idea on paper to traveling with the team on the road to help verify the run results.”

Robert Mainwaring, Technology Manager for Innovation, Shell Lubricants, said the goal for the project was to challenge how the trucking industry is defined and further the conversation on fuel-reduction technologies.

“Through this road trip, we were able to test the Starship truck along with a number of technologies available today to provide insight into what trucking fleets and owner/operators could consider adopting to help reduce fuel use and emissions as they haul heavy loads.”

That fuel economy has real world benefits that won’t just show up at the pumps. If all 2 million trucks in the U.S. drove with the same efficiency as shown by the Starship truck, they would emit an estimated 229 million less tons of CO2 into the atmosphere each year – a reduction of 60%.

The truck also combined carefully thought out aerodynamics, including a customized carbon fiber cab and full side skirts, with a Cummins X-15 efficiency engine, low rolling resistance tires, and a smart driving strategy.

The streamlined design of the truck was amped up with the addition of recently DOT-approved full video only mirrors that provided a broader, nearly 180-degree view on each side of the truck for the driver.

“We’ll move forward to apply learnings from this test run and implement additional technologies on the truck for future testing. While it would be easy to say the Starship Initiative has been very successful, we know there is more we can do to continue to drive industry dialogue and share learnings moving forward,” said Mainwaring.