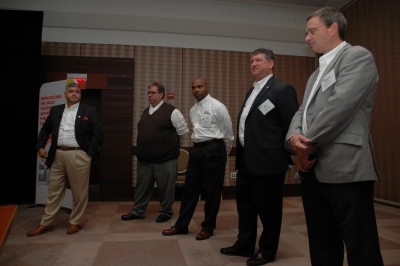 Anxious buyers will even be able to tap into the benefits of T5 10W-30 CK-4 oils as early as this August, before the official December 1 rollout of the American Petroleum Institute labels.

“We can’t licence it as CK-4 yet, but it will be CK-4 fluid that’s in the bottle,” says Matt Urbanak, Shell’s primary formulator on the project.

For customers, the new CK-4 T5 10W-30 synthetic blend can mean fuel economy gains of 1.6% when compared to a 15W-40 benchmark, and Shell describes it as a credible number that can be offered with a 95% confidence level. Those results relied in part on fuel economy tests in Montreal, which were overseen by PIT Group, drawing on procedures such as SAE J1321 tests for highway trucks loaded at 50%, and J1326 tests for stop-and-go delivery applications.

The savings better the conservative estimates of 0.5% that the North American Council of Freight Efficiency recently said could be realized by using low-viscosity oils, which help to offset the 16% of energy that is wasted through mechanical factors such as pumping and friction.

“You can get good fuel economy gains when your engine is at idle, but it’s also where you’re using the least amount of fuel,” adds Dr. Jason Brown, global technology manager – Heavy Duty Engine Oil, referring to the confidence Shell has in its numbers. “It’s not always about generating a big number. It’s about generating the right number.”

“We’ve had our own customers do their own field trials and come out with similar results,” Urbanak added in an interview with Today’s Trucking. “We feel confident that’s a number that’s achievable, that a typical customer may see. I think there’s skepticism when you put a number out there that’s too big.”

It all represents a new decision for oil buyers, who will now have to choose between two distinct oil categories that will be on shelves at the same time. The CK-4 products will replace their CJ-4 counterparts, and will be backwards compatible. In contrast, some manufacturers will allow the FA-4 oils to be used in older engines, but others won’t. Pouring a new FA-4 oil in a pre-2017 engine could lead to lower oil pressures, particularly at idle, says Dan Arcy, global OEM technical manager. “Some of these engines were just not designed to run on this low viscosity.”

Pouring a bit of CK-4 oil into an engine filled with FA-4 will be a lesser problem. “You’ll end up getting a thicker oil,” says Guerrero. The parts are protected. Just the fuel economy might drop.

Shell says it has run almost 65 million kilometers of on-road tests using oil prototypes, and more than 50,000 hours off-road. And there’s a battery of new tests that had to be met to ensure that new formulas can withstand tougher operating environments. There are 18 engine tests overall, checking everything from rings to liners and camshafts, and measuring them against 66 wear parameters. Shell says its oils recorded wear levels that averaged less than 29% of the maximum allowable limits.

Oxidation stability had to be improved because new engines could be running up to 10 Celsius hotter than they do today, says Arcy. Enter the new Volvo T13 oxidation test that will involve running an engine for 360 hours under a high amount of Exhaust Gas Recirculation, oil galleries reaching up to 130 Celsius, and smaller sumps to cool the oil. “When you heat an oil up and oxidize it, it causes it to get acidic and causes it to thicken up,” Arcy says, referring to the need for that test. Between 300 and 360 hours, the viscosity can’t increase by more than 75%, as measured by infrared readings.

The Caterpillar Aeration Test, meanwhile, will involve running a C13 engines for 50 hours under a light load, to see how much air stays in the oil. That is a particular issue for off-highway fleets. “It can cause some driveability type concerns,” Arcy says. The parts needed for older versions of the tests were becoming hard to come by.

Seven tests currently used on CJ4 oils will also continue, although some will be modified. Shear stability standards had to be upgraded because some of today’s oils have been known to shear out of their grades. Put another way, a 15W40 could transform into a 15W30 before its job was done.

The Shell oils have reportedly performed well in tests measuring things like deposits and sludge. A Paccar MX engine with close to 988,000 kilometers showed little in the way of deposits on lands and grooves. That could even be measured in new ways thanks to a 3 D scanner, which generates something that looks like a thermal image. The connecting rod bearings pulled from a 2013 DD15 after about 950,000 kilometers of service also looked similar to those pulled straight from a box.

The company has even met a Mercedes spec’ for biodiesel blends of 5-10%, measuring how well the oils protect against corrosion and oxidation.

Don’t think this will be the last of the testing demands, either. Daimler didn’t establish a proposed test to measure liner scuffing in time to be included in the API standards, but it can require the measures separately before offering approval. “I bet we’ll see it in the Detroit Diesel spec’,” Arcy says, noting that the test itself has been sanctioned by the ASTM.

Also coming in December is a new Rotella T6 5W30 CK-4 that can be used for diesel and gasoline engines, and Shell says it meets the needs of both without using a loophole in the standards that have traditionally leaned on phosphorous levels to protect catalytic converters in cars.

While much has changed, Shell says its existing CJ-4 oils could have met the CK-4 standards, but that it chose to exceed the benchmarks.

“Technically we’ve had a CK-4 product in the market for the past 10 years,” says Urbanak, referring to the Rotella T TP 15W40.

Changing labels will play a big role in helping buyers to identify the difference between the CK4 and FA-4 formulas. It begins with the API donut. One quarter of the outer ring on an FA4 oil will show the designation in white type on a black background, the reverse of what is in place for a CK-4. But Shell bottles of FA-4 will also come with red caps, and labels with red stripes. (Bottles also become marginally thinner, to better fit on shelves, but Shell is retaining its popular two-handle designs for easier pours.) The name “Ultra” will be added to the designations as well.

Needing to choose between two categories of oil is a new challenge, but it has existed before. The CF and CF-2 oils represented a split category, and an interim CI-4 Plus oil was introduced before CI-4 officially made way for the CJ-4 category.

Reaching this point has been an involved process. The Engine Manufacturers Association first approached API with the call for a new oil category in June 2011. Between December 2011 and this February, a team developed the pass and fail limits for different tests. Each step was also decided by consensus, which itself is no small task given that meetings could attract 100 people or more.

The new oil categories represent a significant change to oil manufacturers for a number of reasons. The CJ-4 oils, first introduced in June 2006, have been on the market much longer than many of the oil categories which went before them. “That also has something to say for the quality of products we put together at that time,” says Arcy. Much has changed since then, including everything from new metallurgy to the rising popularity of common-rail injection systems.

It will be up to engine manufacturers to set the oil drain intervals, although there will be no change for legacy engines changing from CJ-4 to CK-4 oils, Arcy says. There are also factors to consider beyond the oil alone when setting maintenance intervals. “A fleet is not going to want to bring a truck in at 50,000 miles and 60,000 miles for something different,” he says.

Manufacturers have some related changes themselves. Brown, for example, notes that manufacturers might need to revise ring clearances, change the nozzle sizes in sprayers, and change the bore size in oil galleries to improve oil pressure.

Now the race for sales begins. Shell holds 19% of Canadian Heavy Duty Engine Oil sales. There will be more testing, too. Next year the focus will be on comparing the formulas to other products, and field tests will need to be conducted on the next generation of engines. Looking further into the future, the company is even testing oils with lower viscosities than FA-4 formulas.