LETHBRIDGE, Alta. – The third annual Southern Alberta Truck Expo and Job Fair went off without a hitch July 15, with Lethbridge mayor Chris Spearman opening the event highlighting how important trucking is to the economy.

“You’re essential, and I don’t know if anybody ever says ‘thank you,’ but today I’m going to say thank you very much to everyone working in the trucking industry,” said Spearman.

Spearman said the Expo and Job Fair was an opportunity for those in and wishing to get in to the industry to see some great products in an environment where they can come together and share their knowledge and interest in trucking.

The event took place at the Lethbridge Exhibition Park and showcased several trucks outdoors in the parking area, while local companies and recruiters set up booths inside the complex.

One of those companies was Bison Transport, which was on site looking for drivers for Canada-U.S. long haul.

Jana Wilder, driver services recruiter for Bison, said her company has been monitoring the Southern Alberta Truck Expo, which has been growing each year, and felt it would be a good opportunity to find potential drivers.

Matt Geib, who works in driver development for Bison, said with its proximity to the border, Lethbridge, and event itself, was a good fit for finding the right drivers for the company’s cross-border routes.

“We are really strong and looking to grow our southbound lanes, Canada to the U.S.,” said Geib.

Tracy Chow, transportation manager for Whissell Contracting, a five-division construction company out of Calgary, said he took part in the show to help promote his company, educate attendees about what they do, and hopefully find a couple seasonal gravel and water haul drivers.

“I came down here to see if I can get those seats filled,” said Chow.

Leevi Wirth, parts manager for Greatwest Kenworth in Lethbridge, said being part of the Southern Alberta Truck Expo was about putting his support behind an industry he loves.

“The trucking industry is an industry that is underappreciated and it has such a bad stigma on it,” said Wirth, “but without it there would be nothing around us. Everything from agricultural, construction to your household furniture is brought in with trucks.”

Wirth said that although they were not actively recruiting at the Expo, showing support was important, and part of that support was being a corporate sponsor of the event.

Kani Jacobson, secretary/treasurer and coordinator of the event, said the purpose of this year’s Southern Alberta Truck Expo was to educate the public on the importance of safety in and around commercial and non-commercial vehicles, and to help local and international recruiters fill empty positions.

Overall, the Expo saw over 50 companies take part, as well as several drivers showing off their wheels in the parking lot show and shine, the Alberta Motor Transport Association driver simulator, and Gord Cooper with Smokin Gun, who holds the world record for fastest diesel truck. 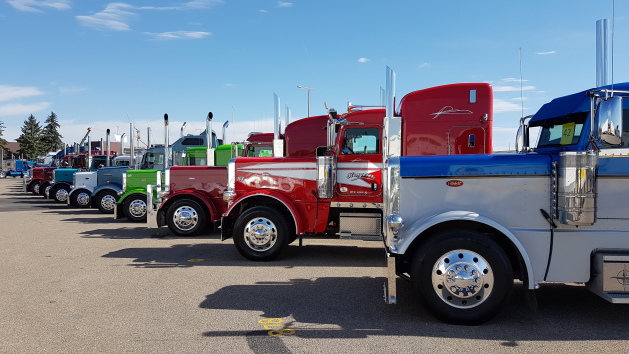