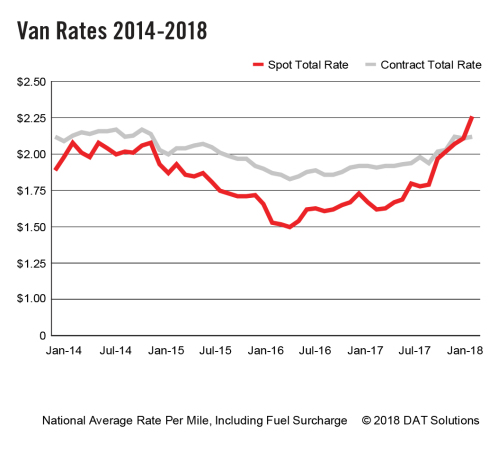 PORTLAND, Ore. – Spot truckload rates for van, reefer, and flatbed freight hit new highs in the U.S. in January, in the face of tightening capacity caused by shipper demand and a mandate for electronic logging devices, DAT Solutions reports.

The national average spot van rate reached a record US $2.26 per mile in January, up 15 cents compared to December, and 59 cents higher than January 2017. (All rates expressed in US dollars.) January’s spot rate was also 14 cents higher than the average contract rate, which means truckload carriers were paid more for one-time loads from freight brokers than longer-term contracts negotiated with shippers, DAT reports.

“Many fleets have reported that the transition [to ELDs] can hamper productivity, at least temporarily,” the company says.