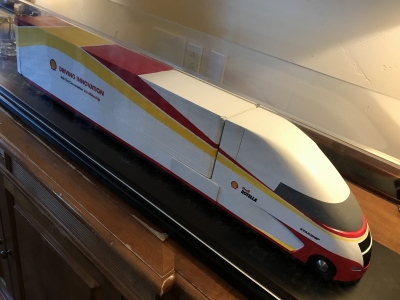 SANTA BARBARA, CA – Shell is on a mission to explore fuel economy improvements that might be realized in decades to come. And some of the ideas are now taking physical shape in the form of a prototype tractor-trailer known as the Starship Initiative.

The streamlined and lightweight vehicle, developed in a partnership with Airflow Truck Company, is scheduled to be run from coast to coast in the first quarter of 2018.

But the focus will be less on miles per gallon as it will be on the energy needed to move a load of cargo. For good reason. The secret to improving miles per gallon is to drive slow and light. A focus on freight-ton efficiency calls for more cargo in the vehicle, creating a need to go slow and heavy.

“That leads you to fight all the prejudices you have,” Mainwaring says.

When moving a 65,000-pound tractor-trailer from zero to 50 miles per hour, about 22% of the energy is lost to rolling resistance, and 19% goes to aerodynamics. Now it is a matter of seeing how these issues can be addressed.

“We’ve obsessed about its aerodynamic shape,” Mainwaring says. The tractor-trailer gap has been tightened, skirts run almost to the ground, belly bands control air flows underneath, and there is a boat tail to the rear. Starship has halved the aerodynamic drag of vehicles on the road today, Shell says.

“It’s ridiculously light,” Mainwaring adds, referring to the carbon fiber cab. The exhaust aftertreatment system has been reshaped to run in a straight line, and tire pressures are controlled through an Automatic Tire Inflation System. A regenerating axle on the trailer captures energy generated when running downhill, while a 5000-watt solar panel array on the roof of the trailer will meet auxiliary power needs.

Close attention has also been paid to lubricants for the engine, transmission, and axle, as well as wheel bearing grease.

The project is an extension of Shell’s broader discovery hub for innovation, which researches the links between lubricants, engines, and particulate emissions.

That research is scouting the challenges and solutions of tomorrow, researching data, and exploring prototypes to push the limits. In the case of lubrication science alone, Shell is looking at everything from fluid performance, to grease costs, oil life, surface sciences, and co-engineering projects.

“What role does the lubricant have and what’s the cost balance of what the lubricant brings?” Mainwaring asks, referring to research at three universities including MIT.

Something clearly has to be done. Energy use is up, fossil fuel supplies are dwindling, and energy security remains a worry. “Not doing something is not an option,” Mainwaring says. Consider some of the hard truths. The world’s energy demand is expected to increase 200% by 2050, as the global population swells from 7 to 9 billion. About 75% of people will also live in cities, compared to 50% today.

North Americans also generate more carbon dioxide than counterparts around the world, reaching 25 tons per person per year compared to 10 tons in Europe and four tons in Asia. While significant gains have been made in reducing particulate matter and smog-causing NOx, and the U.S. has introduced the first legislation limiting carbon dioxide emissions in trucks, transportation still accounts for 35% of energy use overall.

“You have to pay a lot of attention to transport if you’re going to reduce global CO2,” Mainwaring says.

It will take time. Lots of time. “We don’t know what the answer will be in 2040 let alone in 2020,” he admits. It’s why manufacturers are experimenting with a broad range of technologies.

“Collaboration is key between companies if you want to find solutions that have a chance of driving material change,” he says, referring to the spirit behind the Starship truck.

“This whole project is the accumulation of my life’s work,” adds Airflow’s Bob Sliwa, in a promotional video on the project. “This is a good thing to do.”