“In addition to consumer vehicles, there are two other types of electric vehicle needed: heavy-duty trucks and high passenger-density urban transport,” he writes in the plan that was posted last night. “Both are in the early stages of development at Tesla and should be ready for unveiling next year. We believe the Tesla Semi will deliver a substantial reduction in the cost of cargo transport, while increasing safety and making it really fun to operate.” 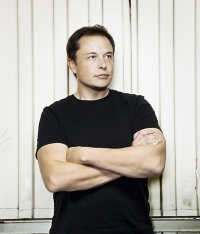 Musk is not the first person with a Tesla background to explore options with electric trucks. Co-founder Ian Wright left the company and launched Wrightspeed, which is about to begin producing a range-extended electric powertrain known as the Route.

Meanwhile, Musk continues to promote the value of autonomous vehicles following a May 7 fatal crash in which one of Tesla’s autonomous Model S cars failed to recognize a tall, white trailer against a bright Florida sky. Missouri cited that collision when scrapping a pilot program to allow testing of truck platooning within the state.

“With the advent of autonomy, it will probably make sense to shrink the size of buses and transition the role of bus driver to that of fleet manager. Traffic congestion would improve due to increased passenger areal density by eliminating the center aisle and putting seats where there are currently entryways, and matching acceleration and braking to other vehicles, thus avoiding the inertial impedance to smooth traffic flow of traditional heavy buses,” Musk writes.

Still, he does see challenges ahead. “It is important to emphasize that refinement and validation of the software will take much longer than putting in place the cameras, radar, sonar and computing hardware,” Musk acknowledges. “Even once the software is highly refined and far better than the average human driver, there will still be a significant time gap, varying widely by jurisdiction, before true self-driving is approved by regulators. We expect that worldwide regulatory approval will require something on the order of 6 billion miles (10 billion kilometers). Current fleet learning is happening at just over 3 million miles (5 million kilometers) per day.”

Musk also defends the company’s decision to deploy partial autonomy today. “When used correctly, it is already significantly safer than a person driving by themselves and it would therefore be morally reprehensible to delay release simply for fear of bad press or some mercantile calculation of legal liability,” he says. “It would no more make sense to disable Tesla’s Autopilot, as some have called for, than it would to disable autopilot in aircraft, after which our system is named.”

The U.S. averages one driving death every 143 million kilometers. Musk says Tesla’s systems essentially double the distance traveled before being involved in such a loss.

He adds that the “beta” label will be removed from the system once Autopilot is considered 10 times safer than the U.S. vehicle average.

“We must at some point achieve a sustainable energy economy or we will run out of fossil fuels to burn and civilization will collapse. Given that we must get off fossil fuels anyway, and that virtually all scientists agree that dramatically increasing atmospheric and oceanic carbon levels is insane, the faster we achieve sustainability, the better,” he says of the broader vision.