MARKHAM, ON – It’s been a year since Ontario updated its Slow Down, Move Over Law to help protect tow truck operators at work, but there is clearly the need for a reminder.

The day before Friday’s official launch of Tow Safety Week, Ontario Provincial Police who were closing a highway ramp had their cruiser hit from behind. That was within hours of a truck rollover where police watched a motorist weave through the pylons meant to protect emergency crews. 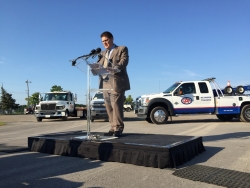 “When you see flashing lights — whether or not they’re red and blue lights from emergency or amber lights from a tow truck — if they’re stopped assisting a disabled or damaged vehicle, we need to have drivers take their foot off the gas. Slow down. And if there’s a lane next to them, move over,” said Sgt. Kerry Schmidt of the Ontario Provincial Police Highway Safety Division. “As a worker who works at the side of the road every single day, our attention is on the crisis that we’re presented with, and we have to divide our attention to make sure that we’re being safe.”

Last year, Ontario Provincial Police laid 2,031 charges under the law, with fines ranging from $490 to $2,000 and three demerit points.

The launch of Tow Safety Week at the 18th annual Tow Show in Markham, Ontario was used to reinforce the dangers of working within feet, or even inches, of live traffic lanes.

“One tow operator is killed every six days in North America, and that’s more than all other first responders,” noted Joey Gagne, president of Provincial Towing Association Ontario. “People don’t move over just out of courtesy. And tow operators work right on that yellow line. People clip them, hit them, rear-end them.”

“In any other workplace, there would be a buffer zone. In a construction zone they put up pylons, they put up yellow tape,” he added. “It seems that people don’t respect that work zone space.”

“We believe that everyone deserves a safe place to work, even at the side of the road,” said Cindy Hillaby, vice president – membership and automotive services for CAA South Central Ontario, which led the Tow Safety Week event. “We know all to well about the near misses that happen on the highways, close calls and dangers that happen to tow truck operators.”

The CAA first began calling for tow trucks to be added to the Slow Down, Move Over Law in 2010. When Ontario made that change in 2015, it joined five other provinces and most U.S. states that already have such rules on the books.

“We’re just getting going,” Gagne said of the outreach programs. “We haven’t got there yet. There are still towers being hit.”

It is not the only safety-related issue facing the province’s tow truck drivers. As of January 1, they will be required to hold a Commercial Vehicle Operator’s Registration certificate, and be governed by the same safety ratings that apply to their fellow truckers.

But the provincial government has accommodated the industry with approaches to inspections that will put less of the focus on roadside scales, he said. “Scales aren’t built to bring in consumers if I have a truck full of people.”