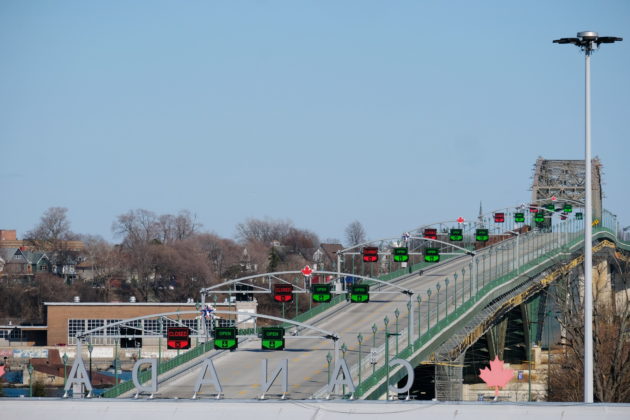 TORONTO, Ont. – Just a couple of weeks ago, Shandex truck driver Mike Corkery rolled to a stop at the Canada-U.S. border. The Ambassador Bridge linking Ontario and Michigan was packed.

“It took three hours to cross,” he recalls. “I ran out of hours. I pretty much got across and had to go to sleep.”

Without the delay, he could have made it to Indiana. But delays like these tend to be one of the realities of trucking. The 25-year truck driver knows that well.

What a difference a few days can make.

When Corkery approached the Peace Bridge at Fort Erie, Ont., there were no more than five other trucks on the entire span.

All non-essential travel has been suspended along the Canada-U.S. border since March 21.

“No measures have been introduced restricting commercial shipments or rendering certain products as non essential,” Stuart stresses, noting that CBSA is working with other federal partners to assure businesses that commercial traffic continues.

“Cross-border supply chains are vital to ensure the continued flow of good, including food and medical supplies for all Canadians.”

Corkery and his truck are among them.

Some things haven’t changed that much. The traditional search for truck parking continues. But these days it takes on a greater sense of urgency. Everyone is scrambling for available spots, not knowing which locations might be closed down along the route. Corkery now stores a two-week supply of food in the sleeper, just in case he’s stranded somewhere in the U.S.

When he arrives at home, his wife has him put his clothes into a plastic bag for the wash, and he heads straight for the shower. She then wipes everything down with Lysol.

They’re doing everything they can to help protect his mother-in-law, who’s 83.

“I’m not scared of getting it,” Corkery says. “I’m scared of bringing it home.”

But the freight has to move. So he’s southbound once again, this time with a load of paint destined for North Carolina. Even if he stops for something as simple of fuel, he is taking new precautions.

But he has been touched by some sights along the way. Last week, at an industrial park in North Carolina, he caught a glimpse of a mother and two kids holding up pieces of Bristol board. “They said, ‘Thank you for the supplies.’”