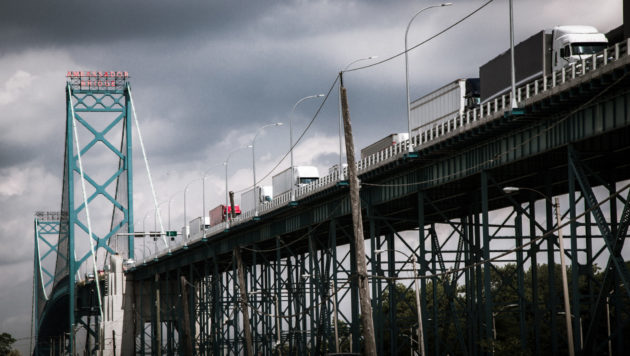 The question is when the conditions will begin to retract, and when there will be less freight to move. For now, economic indicators point to conditions that might best describe a flat market, softening but not breaking.

“It’s going to be a decent but not impressive year according to all of these indicators,” said Federal Reserve Bank of Chicago economist William Strauss, as he referenced multiple economic indicators. The probability of a recession has inched higher, he said, but the threat is no bigger than it would be in a typical year.

This hardly means the trucking industry will escape economic challenges in 2020. Broad, structural changes are affecting the demand for drivers and trucks alike. They’re key economic indicators, too. Looking back to the recession of 2009, job growth began trending downward for almost a year before the economic cycle hit its peak. Class 8 truck sales in the U.S. peaked in December 2006, a year before the economy began to retract.

The net orders for heavy trucks shifted higher at the end of 2019, following several months of a slower pace, and backlogs have now climbed back above six-month levels, Strauss said. Like manufacturers themselves, he expects vehicle sales to drop, however. Even the net orders for medium-duty trucks – the workhorses of e-commerce – continued to decline.

Dieli adds that today’s trucking activity has also slowed in the face of trade wars and tighter monetary policies.

MacKay and Company’s Truckable Economic Activity (TEA) measure – a barometer that reflects economic conditions that have a direct impact on trucking – was up 2.2% in the third quarter of 2019. The growth rate is half what it was a year ago.

The supply chain is evolving, though. Agricultural goods, which account for 10% of U.S. exports, dropped in the latter half of 2018 because of factors such as tariffs, but that freight has recovered as new markets have been secured. When China stopped buying American soybeans, for example, new markets were found in Brazil and Argentina.

Lower interest rates and favorable demographic conditions, meanwhile, have been a boost to residential construction, and all those building materials need to move by truck.

Non-automotive consumer goods have escaped many of the tariffs, and demand remains strong, he added. But there has been a surge in inventories. Dieli wonders how much of that volume was linked to pre-buys as companies looked to establish inventories before tariffs took hold.

Then again, growing inventories are less of an issue for trucks. “The truck,” he said, “doesn’t know if it’s going to the warehouse or from the warehouse.”

The threat of trade wars

Trade wars are still a threat for the aftermarket, though. If there’s no steel to move, a truck is parked, he explained. If the truck is parked, the owner doesn’t buy fuel or put wear and tear on the vehicle. That means fewer parts are replaced.

“We are in the middle of a trade war,” he said. Even if a truce is declared, the related recovery will take time. “If a trade war ends tomorrow, the problems caused by the trade war won’t.”

Talk of an accelerating trade war, when Trump threatened further tariffs on Mexico and other markets, caused “tremendous insecurity when it comes to the supply chain,” Strauss added. With the Canada-U.S. Mexico Agreement (CUSMA) and the first phase of a trade agreement with China, “we’re keeping our fingers crossed that we’re going to see some kind of improvement.”

While tariffs were increased in a “non-trivial way”, the U.S. and Canada continue to be among the lowest-tariffed countries in the world, when compared to markets such as China, Russia, Mexico, Saudi Arabia, India, Brazil and Korea. “Really, what caused a disruption were all those tweets around additional tariffs,” he said.

The economists essentially describe middle-of-the-road conditions, not the end of the road. Decent growth, Strauss said, not impressive.

This still maintains the longest economic expansion in U.S. history, marking 126 months of continuous growth and breaking the previous record of 120 months in the 1990s. It’s just the “mildest expansion” of the two because of growth that is a full percent below typical levels.

For every positive indicator there seems to be a challenge. It’s been 50 years since unemployment rates were as low as they are today, and the U.S. added more than 2.1 million jobs last year, but those tracking the stock market are wondering about the potential influence of the coronavirus emerging in China. Remove volatile food and energy costs for the equation, and core inflation sits below 2%. The Federal Open Market Committee expects it to stay there into 2022.

Canada’s Gross Domestic Product (GDP) was up 1.6% last year, according to the Blue Chip Economic Indicators Forecast, and similar growth is expected in 2020. The U.S., up 2.3% last year, is expected to grow at a slower 1.9% this year.

The U.S. economy is expected to expand through 2022, while unemployment is expected to rise moderately, Strauss said. Inflation is forecast to be at the U.S. Federal Reserve’s inflation target through 2022. And while manufacturing activity and industrial production are expected to increase into 2021, it will be at a slow pace.

It’s steady as she goes. Unless something changes.