With support from the Swedish Energy Agency, Volvo developed a new concept vehicle, the result of a five-year-long research project aimed at creating more energy-efficient vehicles. The new concept truck is said to cut fuel consumption by more than 30%. 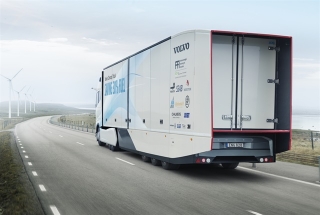 “Our concept truck showcases the immense power of on-going technical advances,” says Claes Nilsson, Volvo Trucks president and CEO. One of the key factors behind the low fuel consumption is its massive 40% improvement in aerodynamic efficiency that has benefited both the tractor and trailer.

Engineers modified the entire rig, a Volvo FH 420 with a Volvo D13 Euro 6 engine, and optimized it for improved aerodynamics as much as possible. For instance, it uses cameras instead of rear-view mirrors to cut air resistance. Aerodynamically optimized chassis side-skirts cover the rear wheels on the tractor and all the trailer wheels. Aerodynamic spoilers extend the trailer and cut air resistance, and it features optimized air flow for the engine’s cooling system. It’s designed with minimized air resistance at the front of the tractor, the wheel housings and entry steps.

In addition to the aerodynamic improvements, the concept vehicle is fitted with newly developed tires with lower rolling resistance. The trailer weighs two tonnes less than the reference standard trailer, which translates into either lower fuel consumption or the possibility of higher payload.

The aim is to improve the efficiency of long-haul truck transportation by 50%.

Since the concept vehicle is part of a research project it won’t be available on the market. But some of its aerodynamic features have already been implemented on Volvo’s series-produced vehicles, and more of its techno-trickery may be fitted in the future.

It’s not unlike other concept trucks from other manufacturers, especially the SuperTrucks produced in recent years by Freightliner and others on these shores in conjunction with the U.S. Environmental Protection Agency.