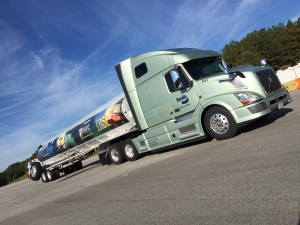 LAURENS, SC – Today’s trucks are undeniably safer than the models that came before them. Cabs are tougher. Stability controls keep wheels firmly on the ground during tight turns. Cameras and radar-based systems can even provide virtual eyes for the road ahead.

Each system plays a role in an ongoing evolution in the name of safety, and Volvo Trucks North America wants customers to see just how far its trucks have come.

The manufacturer is hosting a safety symposium in Laurens, South Carolina this week, demonstrating the difference that can be realized with some of its latest enhancements – particularly in the form of the recently unveiled Volvo Active Driver Assist collision mitigation system, and the Enhanced Stability Controls which help to prevent rollovers.

Active Driver Assist builds on a foundation of the Bendix Wingman Fusion system, using a windshield-mounted camera and bumper-mounted radar to monitor surroundings. The radar itself scans for vehicles 500 feet ahead of the truck, across a 22-degree angle, while the camera looks across a 42-degree angle. Alarms begin to sound at speeds above 24 kilometers per hour if following distances close to within 3.5 seconds. Brakes automatically apply if the equipment determines a collision is imminent. An integrated Lane Departure Warning sounds a tone when the truck drifts across lane markings, too.

It isn’t the only integrated feature. Volvo has also incorporated Active Driver Assist readings directly into its driver information center, next to the speedometer. No extra screens have to be mounted on the dash. The speeds of vehicles ahead of the truck are shown using a series of lights around the speedometer, and a ring of red lights appears when the active controls are applied.

Such events don’t have to go unnoticed by fleets, either. The camera captures video images both 10 seconds before and 10 seconds after an event, and the system will store up to 40 of these clips. Using telematics, the data can even be fed to fleet managers through emails or a centralized portal.

Drivers still maintain control, though. When warnings are sounded, those who sit behind the wheel can back off the throttle or apply brakes on their own. Steering can be corrected if Lane Departure Warnings sound. There is even the option of silencing the latter warnings when traveling through heavily-marked areas like construction zones. And another push of the same stock-mounted button can capture about 1-1/2 minutes of video if a driver wants further proof of the situation they encountered. 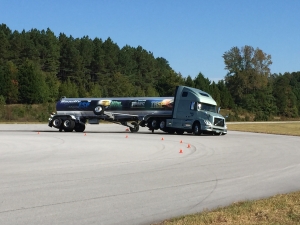 Demonstrations at Michelin’s proving grounds – a 3,300-acre outdoor laboratory of test tracks – offered the setting to show customers exactly how quickly the systems can react.

Meanwhile, a tanker equipped with outriggers demonstrated how easily a rollover can begin, and how seamlessly the same situations are avoided when stability controls are working. Without the controls, outriggers skipped off the pavement to keep the trailer from tipping on its side. When activated, wheels remained on the ground, even when heading into the same turns at higher rates of speed.

As revolutionary as the equipment can seem, it represents just the latest of many safety-related enhancements. Safety has been one of Volvo’s “core values” since making its first truck in 1928, said Magnus Koeck, vice president – marketing and brand management. The idea of making safer vehicles can even be traced back as far as 1915, when company representatives (then under the umbrella of SKF Corporation) were pitching ball bearings to Henry Ford.

They returned to Sweden with the idea to build vehicles instead.

“They recognized they had a unique opportunity – and that was to design a safer vehicle,” says Rob Simpson, director – brand and marketing development. “It’s fundamental in everything we do.”

In 1956 Volvo began protecting drivers in an all-steel cab, and it continues to stress that High Strength Steel has a greater strength-to-weight ratio than aluminum. Its cabs also exceed the demands of the Swedish Cab Safety Test, considered to be one of the most stringent standards in the world. Inside, drivers are further protected by a collapsible steering column, an engine and transmission that will drop down and under the cab in the event of a collision, and breakaway foot pedals that are designed to reduce the threat of injuries to ankles and legs.

This is the company that invented the three-point safety belt, and made driver-side airbags standard in 1995. Some operational enhancements that might not be labeled as safety systems are making a difference of their own. Downspeeding packages, for example, offer a quieter ride that can help prevent fatigue, Volvo officials note. Automated Manual Transmissions such as the I-Shift leave drivers to focus on the road rather than gear selections.

Equipment enhancements have certainly made a difference to McKenzie Tank Lines, a 275-truck fleet with terminals across North America. It recorded 11 rollovers and almost 50 rear-end collisions between 2003 and 2007. Last year there was only a single rear-end collision and no rollovers. This year there hasn’t been either.

McKenzie has long been an early adopter of safety equipment, such as Automatic Slack Adjusters (1984), LED lights (1997), antilock brakes (1998) and traction controls (2000). It was also an early user of Eaton VORAD collision warning systems and an early generation of the Takata Lane Departure Warning System, as well as full Electronic Stability Controls (2006), and air disc brakes (2011). The latest updates that include Active Driver Assist allows managers to review videos of close calls along with data tracking everything from speeds to pedal positions and following distances. Pre-defined thresholds even help to flag drivers who have too few miles between individual events.

There is an important thing to note about the rollovers and rear-end collisions that did occur in recent years, adds Jim Kennedy, the fleet’s vice president – maintenance. “Every single one of those vehicles did not have on it the technology that affected that particular type of event.”

It’s why the fleet continues to evolve in the name of safety.