DUBLIN, Va. – The key to being successful in trucking? Keep up with technology and keep up with your customers – at least, that’s what Volvo executives say. 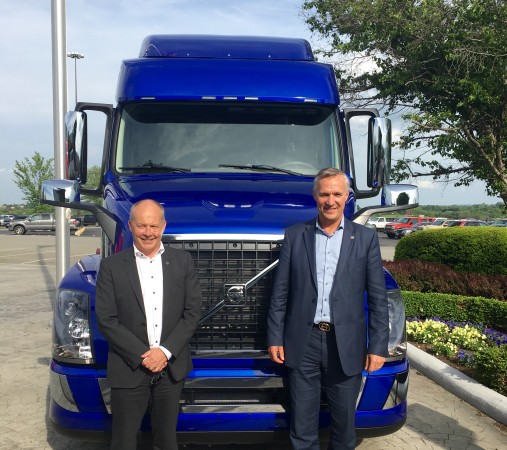 At its New River Valley truck manufacturing plant in Dublin, Va. on May 11, Goran Nyberg, president of Volvo Trucks North America and Claes Nilsson, Volvo Group executive v.p. and president of Volvo Trucks, gave trade journalists an inside look at how Volvo would be moving forward in 2016 and beyond. And they were specific: Volvo would be focusing on technology and their customers in the future.

“But 2016 has started off a bit more challenging than we expected,” Nyberg said. “I would say the first quarter and the beginning of the second quarter is a bit soft. We have to adjust and level ourselves with the new normal.”

Both Nilsson and Nyberg confirmed that they expect the industry to see 250,000 Class 8 net orders this year.

To continue it’s growth, Nilsson said it wants to position itself as a technology leader.

“We really want to be a technology leader,” he said. “In terms of innovation…we have launched a number of features which have been technology leading. Right now we are focusing on some interesting areas of technology like platooning, autonomous vehicles and alternative fuels.”

Volvo has also launched a number of new products as of late, Nyberg added that are both technologically advanced, and add value to its customers.

“We have launched new features and values to our customers,” Nyberg said. “As you know we upgraded our engine platforms, we upgraded our transmissions, not only with the crawler gears, but improved gear shifting all with the focus on delivering better fuel efficiency and also the new technology platform for the future.”

Nyberg said that he believes the next big “game-changer” in the industry will be connectivity and how it will help advance predictive maintenance efforts.

“We are looking more at predictive maintenance – proactively being able to predict the faults that are about to happen,” Nyberg said. “Traditionally, the transportation industry has been designed to react when an unplanned event happens. We are moving the game to be ahead the ball and try to predict and prevent things from happening. And when they happen we are proactive.”

He pointed to the company’s new Uptime Centers that have been designed to triage trucks to get them on the road faster. This year the company put in place a formal certification for those Volvo dealerships who were getting the job done right.

“We have launched the concept where we certify our dealers and we call them Certified Uptime Centers,” he added. “That’s more than just a rubber stamp or plaque on the wall. (There’s) a three-phased way to certified a dealer. We are looking at the whole of the market process…parts availability, workshop planning, triage…This will be a win-win situation…It will help us to better communicate to our customers so when a truck goes down, if it’s a quick fix, we can turn it around. But if it’s a major event, we can communicate to them that it’s a major event and tell them they need to put in a spare truck. Communication is key. Trucks will break down in the future. But it’s about how efficient we can be to turn that truck around and maximize our uptime.”

Platooning is also on the company’s radar. In 2015 Volvo invested in truck platooning pioneer Peloton Technology and now says it has a platooning product they are working with. The pair said it anticipates to showcase these developments soon – mid-June – in San Jose, Calif.

In terms of customer-focus, Nilsson said it’s a matter of gaining customer satisfaction by having the right product offering.

“I would like to see us taking a bigger share of the (North American) market,” he explained. “But I would really like us to own that with customer satisfaction and having the right product offer and making sure that we are very efficient in what we’re doing and how we take care of our customer…and how we deliver products and how we deliver spare products and everything else. But it’s also in my point of view very much about attitude and personality.”

Nilsson said that it makes a world of difference when you compare a workshop manager who is thinking about the customer versus one who isn’t.

“What is nice about our industry, is we are still in a relationship industry,” he said. “We’re looking for people that like to take care of the customer.”

At its New River Valley plant, Volvo is also building a separate Customer Experience Center. It broke ground in September 2015 and will feature a product showroom spotlighting the complete lineup of Volvo heavy-duty truck, engine and transmission models. It will also have training rooms and a theatre.

The grand opening for the new centre, that is still being built, is set for 2017.

“We are moving forward,” Nyberg said. “We are happy to celebrate the record year. Is it good enough? Of course it’s not. More is better. We believe that we can, especially with the addition of product features, address a wider audience with our product lineup.”