GOTHENBURG, Sweden – Volvo Trucks has revealed a vision of the future, and it involves plugging into the power of electricity – especially when it comes to electric trucks.

This spring the global manufacturer announced that it will produce electric versions of European FL and FE models beginning in 2019, initially focusing on refuse and urban distribution applications.

These are hardly Volvo’s first foray into electric vehicles, though. The company has already produced about 4,000 electric-hybrid and battery-electric buses, and the trucks and buses will share many underlying technologies such as electric motors and charging systems.

The equipment is also part of a broader environmental strategy – being showcased in Sweden as ElectriCity – that sees battery power as one of the solutions to challenges as diverse as climate change and noise.

While discussions about electric vehicles typically revolve around exhaust emissions, for example, Thorden refers to ways that urban traffic noise can affect personal health because of the way it interrupts sleeping patterns. The driveline on an electric FL truck generates about 69 decibels of sound, compared to the 79 decibels from a diesel-powered unit. To a human ear, that’s about half the noise level.

The resulting sound is more like a golf cart than a truck. The rattle of a diesel engine is silenced, leaving little more than the gentle whine of a compressor and electric drive; the squeak of a fan; the gentle hum of the tires. If things dropped down to 52 decibels, Volvo would actually have to introduce a sound to let surrounding pedestrians know a truck is moving.

The quieter operations could play a role in fleet productivity, too. “Volvo hopes now the lower-noise vehicles in some cities, they will allow us to start peak-hour driving,” Thorden explains. “In the middle of the night, many cities have a [truck] ban.” A pilot study in Stockholm, Sweden, suggests that a focus on nighttime deliveries could reduce daytime trips by as much as 70%, as fleets look to avoid traffic congestion.

With an environmentally conscious focus, there’s also a need to consider how the electricity itself is generated. Tobias Bergman, product manager – alternative drivelines, notes that a four-megawatt wind power plant produces enough energy to drive 200 electric FE trucks. Each turn of the windmill rotor moves a truck 1.5 km, saving 2,500 cubic meters of fuel per year, he says. That annually saves 10,000 tonnes of carbon dioxide in the process.

On the global spot market for energy, clean energy is the cheapest option per megawatt hour, he insists, comparing wind, solar, coal, nuclear, and battery storage. “Clean energy is actually cheaper than conventional energy.” And electric trucks are three to five times more energy-efficient than their diesel-powered equivalents.

Electric vehicles may have a bigger impact on the climate when first produced, thanks to factors such as battery chemistry, but that pales in comparison to the environmental effect a diesel engine would have once on the road.

Beyond the trucks themselves, Volvo’s broader approach is even exploring secondary uses for vehicle batteries. One project underway in Volvo’s home city of Gothenburg is using them to store the energy from a housing project’s solar panels.

The most obvious difference when looking at the trucks themselves is the lack of a traditional combustion engine or exhaust system.

Using a single electric motor and two-speed transmission, the FL delivers a maximum 185 kw of power, generating the equivalent of 248 hp. Its continuous power hovers around 130 kw, or 174 hp. That truck has a gross vehicle weight rating of 35,274 lb.

The larger FE, with its gross vehicle weight rating of 59,525 lb., has a pair of motors delivering a maximum of 370 kw or the equivalent of 496 hp. One motor is always driving while the other is shifting. On a continuous basis it offers 260 kw, or 349 hp. At the rear wheels it even matches the 1,850 lb-ft of torque typically associated with a diesel engine.

The lithium-ion batteries mounted on the frame rails are key to discussions as they relate to potential range and payload. Each battery weighs about 1,146 lb. and stores 50 kWh of energy. And depending on how a truck will be used, there can be two to six batteries overall. This gives the FL a potential range of up to 300 km, while an FE will run up to 200 km between charges under ideal conditions. The ranges can be affected by factors such as road grades or temperatures, but a driveline retarder actually generates energy onboard, with the simple tap of a lever mounted on the steering column. You can even watch it load batteries through a gauge mounted in the dash.

To put it all in perspective, an FE refuse truck is expected to be able to collect 10 tonnes of waste twice a day, leaving power in reserve.

“We don’t want our customers to invest in more batteries than needed,” Thorden agrees, noting how an electric truck with four batteries will sacrifice about a tonne of payload when compared to what someone could haul with a diesel-powered truck.

Still, the batteries continue to evolve. By 2020, Volvo expects they’ll hold about 30% more energy than today, and double their energy storage capabilities just two years later. Prices are dropping, too. 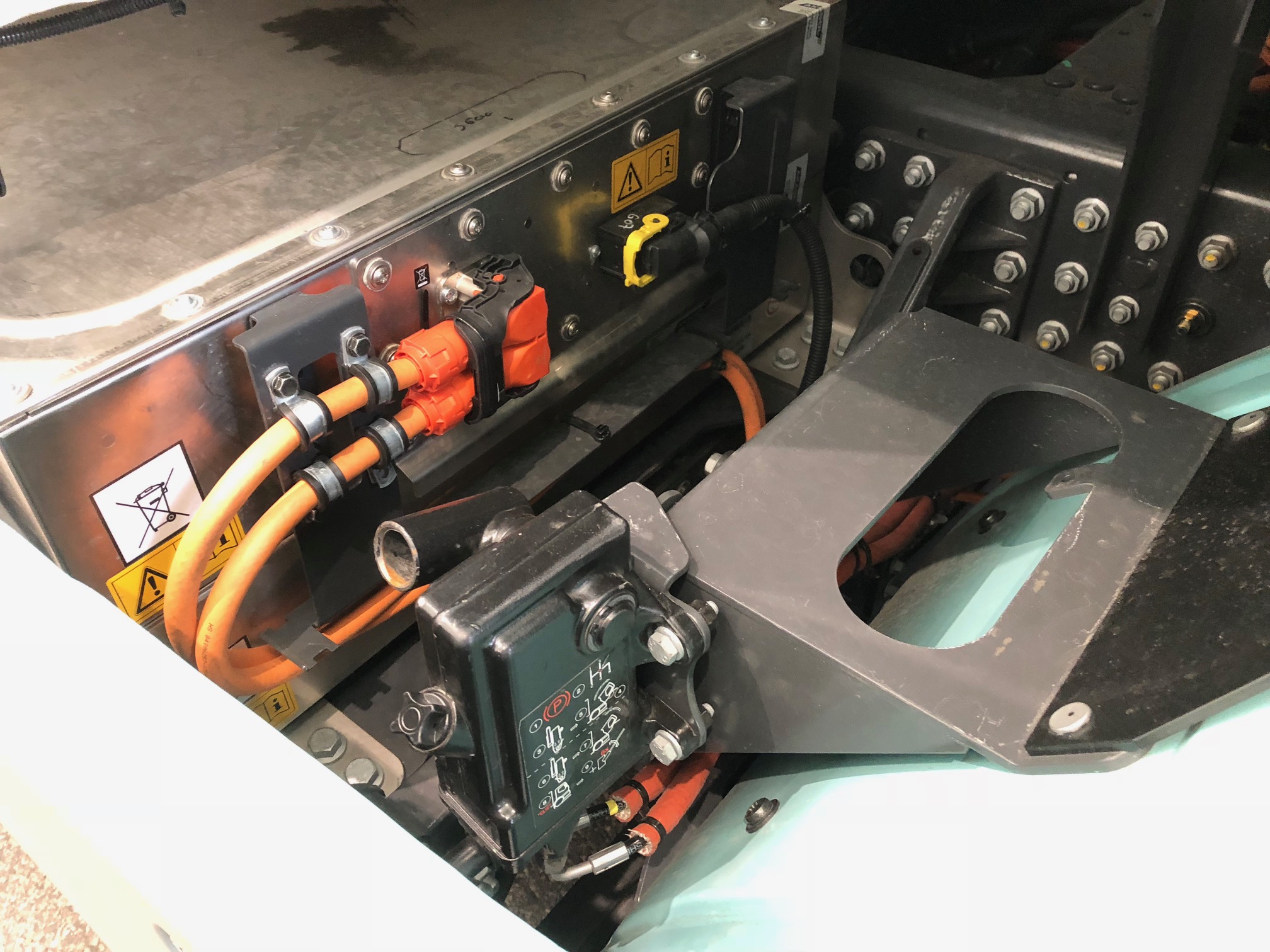 Once batteries are drained, they can be recharged using AC power in a shop, or a fast-charging DC unit. The fast CCS/Combo2 charger that delivers up to 150 kW can do the job in about an hour, while the 22 kW from a unit that draws on the same power as a welding machine can re-charge the batteries in about 10 hours. “It’s never drained 100% when you park it,” Bergman said.

Volvo’s early experience with electric buses will help to ensure the systems work smoothly, says Edward Jobson, vice-president – electromobility. Even with common standards, there were teething problems with early charging systems, for example. “When we were working with ABB, they were speaking one language, and when we were working with Siemens they were speaking another language. They were burning lots of transformers in the beginning.”

It’s not the only thing the trucks will share with the buses.

Beside, axles that integrate the motors are costlier.

Maintenance costs are expected to be lower when compared to diesel-powered trucks as well. Friction material, for example, should last longer because of the driveline’s retarding power. And there’s no combustion-related issues or exhaust systems to consider at all.

The lack of vibrations traditionally associated with a diesel engine will also introduce less stress on the chassis, opening up new opportunities for suspension systems, Jobson says.

“From Day 1 it’s cheaper to maintain and you have less-frequent maintenance.”

When is it coming?

There’s still no word on when Volvo would bring electric vehicles to North America, though.

“Volvo Trucks is convinced that electrification will play an increasingly important commercial and social role in the future, starting with urban transportation where we will see greater concentrations of vehicles and other equipment that can be powered by electricity,” said Koeck. “This technology is maturing quickly, and we will eventually test Volvo’s electric truck offering in North American customer applications to validate how customer operations and duty cycles are best served by the technology.

“The initial focus will be on heavy local delivery and shorter-distance, ‘last-mile’ logistics applications where trucks can return to a central terminal and no public charging infrastructure would be necessary,” he said. “The timing for this is yet to be decided.”

But make no mistake. It’s coming.

“We truly believe this is here to stay. It’s here,” he told a group of journalists and customers. “We will be ready when the market is ready.”