February 16, 2017
Panelists at TTSAO conference argue what needs to be done by schools and students to attract more drivers into the industry

MISSISSAUGA, Ont. – ‘What can we do to get more drivers in the trucking industry?’ is a question that haunts almost every carrier in North America.

And because there’s no simple answer, the question is asked and answers debated time and time again. 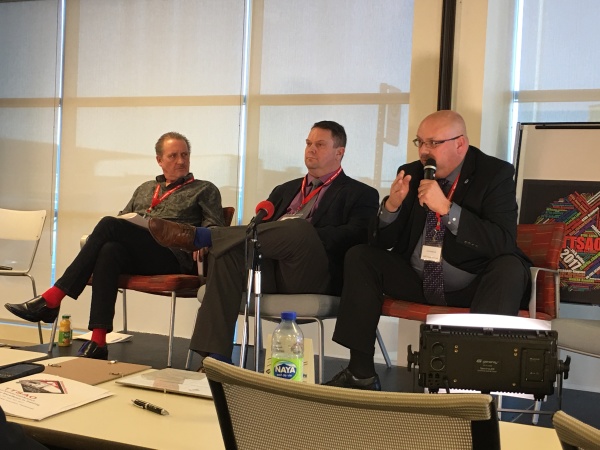 At the second annual Truck Training Schools Association of Ontario (TTSAO) conference at the Centre for Health and Safety Innovation in Mississauga, Ont. on Feb. 16, a panel came together to discuss what schools can be doing better to attract more drivers and what students should be doing if they’re thinking about joining the industry.

What can schools do?

For accredited schools to attract more drivers to the industry, Broderick believes that it’s crucial for schools to educate the public on what the trucking does and has to offer.

“The big thing for training schools is I think what they need to do is educate the public,” he said. “And the best way to do that, is just like the Road Knights program does, go out to high schools and employment fairs and career fairs and teach the public about the industry…Unfortunately, there’s too many people who don’t know exactly how the industry works.”

Medley said that he thinks it would be worth while for the industry to think about tying in an apprenticeship program with training.

“Electricians and carpenters all have apprenticeship programs, so maybe that’s an idea,” he said.

What can students do?

More than anything, do your research, stressed the panelists.

“Obviously check out your schools and carrier options that you have,” Broderick said. “Because you have very good trucking companies…and then you have trucking companies that’ll say we need that load there we don’t care if you’re running over hours.

“If someone is coming into the industry from an accredited school, they need to take the time to research the type of company they’re going to work for. Whether that’s talking to other drivers or even talking to shippers, asking them ‘Hey, what do you think about that carrier?’ And that’s a good way of feeling out the good carriers from the bad carriers, just like you need to feel out the good schools and the fly by night schools.”

Hahn took it one step further by adding that those thinking about entering the trucking industry as a driver should talk to carriers first – even before they enter driving school and start the career change.

“We spend a lot of time doing research on things that we’re going to buy, but we don’t do this with our career choices,” he said.  “These people maybe need to talk to the carriers first about what the expectations are coming in as a new driver. And they have to know realistically what they’re getting involved in…All companies do things slightly differently so it’s a benefit to talk to a number of different carriers…and that research is the only way you can make an educated decision.”

Hahn said that at Challenger there are many applicants who “are not prepared for this industry” because either they didn’t get the proper training or because they haven’t looked into the biggest aspect of a job in trucking – the lifestyle.

That’s because the trainers at “licensing mills” – which pump out Class A licences for $999 ­– don’t educate the drivers on what real trucking looks like and instead, makes false claims about the industry, said Broderick.

“They set the expectations really high,” he said. “I’ve road tested people who have had their licence for less than a year and they thought they were going to be at our very  top wage the minute they passed their test. But that same person missed 28 points on the pre-trip and we didn’t even close the hood.”

“Not doing that research first to make that educated choice, really hurts them in the long run,” Hahn said.