Phoenix, AZ — Western Star has introduced a new member in its line of XD OffRoad trucks, the XD-25. It’s a 25-ton hauler aimed at smaller off-road applications, such as construction, mining, and quarry site hauling. Despite its size and bulk, it can manage on-the-road speeds up to 65 mph or 105 km/h, so in some cases it can be treated as an on/off-road machine.

While it looks something like a 4900, much more steel is involved in its construction. It’s by no means a converted highway truck. 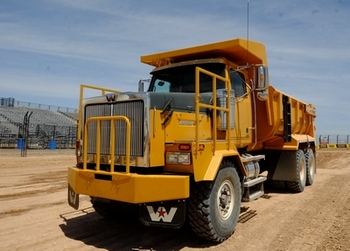 The XD-25 presently comes with a 14-liter Detroit Series 60 Tier 3 engine mated to Allison Off Road Series transmissions and planetary gear sets. The motor will be replaced by year-end with a Detroit DD13.

Platt notes that it’s the only Western Star on offer that’s the cheapest in its market.

“Our customers want an off-road solution that has great ton-per-mile savings, and a lower purchase price over conventional articulated equipment,” she said.

In its 50th anniversary year, the company also introduced several new options available now for many of its other models.

Perhaps most interesting among them is the RollTek seat system.

Available for Western Star 4700, 4800 and 4900 truck models, it automatically inflates side-impact airbags, tightens seat belts, and compresses air-suspension seats to the lowest position to prevent serious injuries to the driver in the event of a rollover.

Other new features and options include:

• The new sealed frame rail for Western Star 4700, 4800, and 4900 truck models, reduces corrosion on double-channel and partial-liner configurations. Sealed along the edges, the flexible water-tight seal prevents the intrusion of liquids and minimizes rust that might occur due to environmental factors and road de-icing products.

• Aimed at applications that can cause abrasion in the chassis, such as construction, logging, and road maintenance, the new abrasion tape for exterior harnesses on 4700 and 5700 truck models will improve durability. Each harness is wrapped in an abrasion-resistant seal and then fastened securely to the frame rails to prevent damage to the wires from debris, water, and chafing.

• With cab access and increased ground clearance, the new aluminum diamond plate tool box for the Western Star 4700 is said to be durable enough to withstand harsh working conditions.

• The 5700 model is now available in a truck configuration for expeditor and RV applications in a daycab or sleeper.

Look for more on Western Star in the June issue of Today’s Trucking.