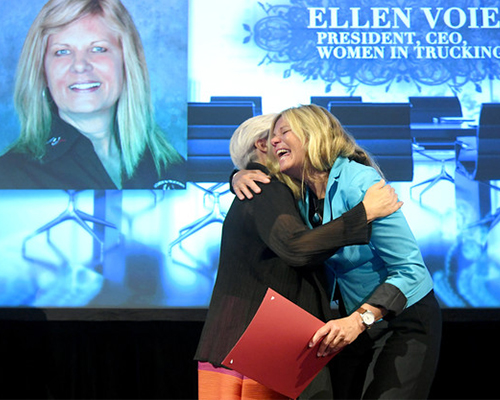 PLOVER, Wis. – Women In Trucking Association president and CEO Ellen Voie has been named the Cinderella to CEO of the Year.

The award recognizes women who have overcome obstacles to change businesses, communities and industries for the better.

It was inspired by the book From Cinderella to CEO, How to Master the 10 Lessons of Fairy Tales to Transform Your Work Life by Cary Broussard.

The inaugural award was presented last week in New York.

“Our goal is to accelerate the successes of women who have worked hard and helped others to also succeed by connecting them to opportunities and each other,” said Cary Broussard, CEO of Broussard Global.

“In 2030, women in the U.S. are expected to control 75% of the wealth in this country. We want the wealth to be in the good, caring hands of those who strive to make the world a better place.”

Nine category winners, including Voie, were recognized by a distinguished Cinderella to CEO panel of judges for their support of other women, their transformational ability to overcome obstacles and barriers, and their desire to motivate others to accomplish their dreams.

Each category is tied to a chapter in Broussard’s book.

“I am so honored to receive the very first Cinderella to CEO award, as there were hundreds of nominations featuring some amazing women who have done truly notable and altruistic projects,” said Voie.

“I am especially thrilled to be recognized by an organization outside the trucking industry, which makes the award even more special.”

Women In Trucking is a nonprofit association established to encourage the employment of women in the industry.