A few months ago I wrote a couple of times about headlights, complaining that the standard lamps offered in most vehicles — from cars to heavy trucks — are insufficient. Meaning, it’s too easy to over-drive your lights at what are pretty ordinary speeds nowadays. The light just isn’t thrown far enough down the road, reducing the ability of a driver to see far enough ahead to avoid an obstruction and maybe a catastrophic accident.

The problem isn’t with truck-makers or light manufacturers. Every one of them has the better product on offer. The problem lies with laws and regulations that make the lowest common denominator way too low.

Responses to my bleating were many, most folks agreeing with me and saying they routinely upgrade their stock lighting, some going the LED route with success despite the added expense.

Well, there may soon be a dramatically capable alternative: a dazzle-free main beam in HD quality by digital means. ‘Smart’ headlights that can change the quality, intensity, and direction of the headlamp’s beam according to what sensors ‘see’ on the road ahead. It’s being developed by Mercedes-Benz for its cars but there’s no reason to think the technology won’t reach the truck market.

AND HOW ABOUT THIS? These lamps are said to provide ideal light distribution in all driving conditions and to support the driver in critical situations. In narrow construction-zone lanes, for example, a light beam directly guides the driver — a line of light is projected onto the road surface which shows the vehicle width and guides the driver safely through the often confusing mess. 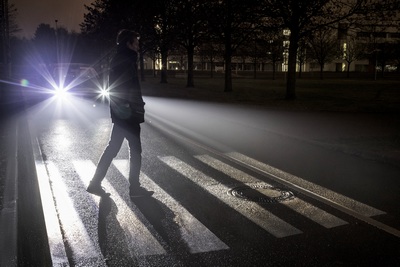 Or this? The new HD projector technology uses sensors on the vehicle to identify other road users and automatically adapts light distribution accordingly. In this process, drivers and front passengers of oncoming vehicles are shielded from the light beam and not dazzled.

This decidedly exciting new generation of headlamps features chips that work with over one million micromirrors per lamp. The light is split up into tiny pixels. The smaller these light pixels become the better the system can react to different situations, the more precisely objects and passers-by can be illuminated and simultaneously individual areas can be faded out or dimmed in a targeted manner.

Animated by high-current light-emitting diodes, over two million micro-mirrors in total radiate onto the road surface – and each mirror can be moved individually!

The intelligent control logic required for the dynamic light functions was developed by Mercedes-Benz in-house. Algorithms receive detailed information about the surroundings from the vehicle sensors, and from it calculate in real time the brightness value for each one of over two million pixels. The result is an intelligent system with well-nigh countless possibilities to provide high-resolution light distribution to suit the surrounding conditions perfectly.

“The decisive factor is not the technology in the headlamp but the digital intelligence behind it”, stresses Gunter Fischer, head of Exterior Body Development and Vehicle Operating Systems at Daimler AG.

Sensors, such as cameras or radar, detect other road users and computers evaluate the data in milliseconds, giving the headlamps the commands for adapting light distribution in all situations.

Mercedes says it doesn’t just want to achieve the ideal light distribution for every driving situation, but guide and support the driver in difficult situations like navigating those nasty construction zones in the dark.

It will even be possible to project light traces onto the road to replace missing road markings, or beam messages like direction arrows or warnings onto the road.

Initial prototypes are already installed in demonstration vehicles. What was unveiled in 2015 in a research vehicle as a vision will be on the road in the near future, says Mercedes-Benz.

Not sure what “near future” means, nor when this technology might reach the world of trucks, but it’s clearly coming. Sounds mighty interesting to me but for those who don’t like the ever increasing complexity of the modern vehicle, this won’t make for warm and fuzzy feeling

FORD IS CELEBRATING 100 YEARS of truck history, starting with its first purpose-built truck, the 1917 Model TT that changed the auto industry and maybe even the very nature of work itself, the company says. 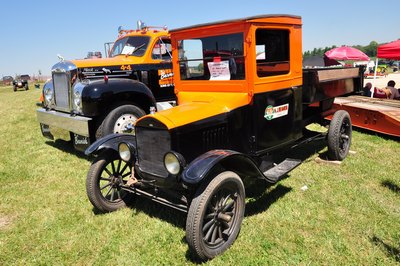 Nine years after the first Model T, Ford customers were asking for a vehicle that could haul heavier loads and provide greater utility for work and deliveries. On July 27, 1917, Ford responded with the Model TT, which retained the Model T cab and engine. The Model TT came with a heavier-duty frame capable of carrying one ton of payload. The factory price was US$600; 209 were sold that year.

Similar to the Fordson tractor introduced in 1917, Henry Ford envisioned a chassis that could accommodate third-party beds, cargo areas and other add-ons to deliver the increased functionality needed to get work done. He was on the money. By 1928, Ford had sold 1.3 million Model TTs before replacing the truck with the more capable Model AA with a 1.5-ton chassis.

“Model AA trucks in particular had a certain class to them,” he said. “Customers could use them on the farm, yet still take them to church on Sunday.”

LIKE THE MODEL TT, THE MODEL AA was available exclusively as a chassis cab offered in two lengths, with new powertrain and axle options for greater capacity. To stay ahead in what had become a hotly competitive business, Ford replaced the Model AA with the even more capable Model BB in 1933. Many were outfitted as mail and freight vehicles, ambulances, and stake trucks. Two years later, Ford introduced the 1935 Model 50 pickup, powered exclusively by its famous flathead V8 engine.

By 1941, Ford had sold more than 4 million trucks. Changing over to war production resulted in the loss of consumer sales but a gain in experience building heavy-duty military truck chassis and four-wheel-drive personnel carriers. A year after consumer production resumed in 1947, Ford leveraged that knowledge to provide even more innovations for its customers.

“After the war, a lot of rural Americans moved to urban and suburban centers looking for work, and many took their Ford pickups with them,” said Kreipke. “Ford saw this as an opportunity, and began work on the next generation of trucks for 1948, what came to be known as F-Series Bonus Built trucks.”

This first-generation F-Series covered classes 2 through 7 capacities – from the half-ton F-1 to the much larger F-8 cabover truck. With the arrival of the second-generation F-Series for 1953, Ford increased engine power and capacity, and rebranded the series. The F-1 became the F-100, while F-2 and F-3 trucks were integrated into the new F-250 line. F-4 became F-350. Class 8 trucks were spun off into a new C-Series commercial truck unit that produced iconic C-, H-, L-, N-, T- and W-Series Ford trucks.

In 1961 – 44 years after the Model TT – Ford introduced its fourth-generation F-Series with the new twin I-beam front suspension and, for the first time, the option of power steering and brakes. With the arrival of the sixth-generation F-Series in 1975, Ford dropped the popular F-100, replacing it with a higher-capacity F-150 pickup to combat the C/K trucks from General Motors. By 1977, F-Series pulled ahead in the sales race, and 26 million trucks later, Ford hasn’t looked back.

Ford moved ahead again in 1998 with the introduction of the F-Series Super Duty. Engineered for fleet and heavy-duty work use, the Super Duty – from the F-250 all the way up to the F-750 – more clearly defined Ford trucks for a growing base of commercial applications.

The company has been out of the class-8 market for some time now, but many of us remember fondly the tall — and wobbly — CL-9000 COE with its air-suspended cab. It was actually the subject of my very first road test published in the long dead Canadian Driver/Owner magazine back in 1980 or so. More people will remember the venerable Louisville, the truck in which I learned to drive. It was a somewhat tired example with a strong 2-stroke Detroit and an Eaton Fuller 13 that had seen better days. But I still say the Louisville was one of the best-handling trucks ever built.

Supported by the ecoTECHNOLOGY for Vehicles program, the CTPS testing program is a joint effort led by Transport Canada and includes the National Research Council Canada; Partners for Advanced Transportation Technology (University of California at Berkeley); the U.S. Department of Energy; the U.S. Federal Highway Administration; the California Department of Transportation; and Volvo Trucks. 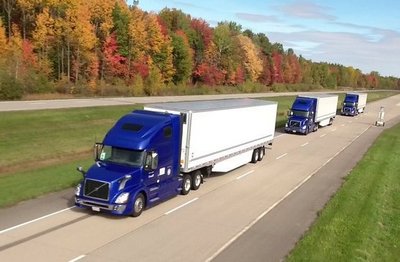 In 2016, the same team successfully conducted fuel economy testing of a three-vehicle truck platooning system. This year, the group is focusing on the real world performance and reliability of CTPS using a range of tractor-trailer configurations, speeds, separation distances, and weights in various traffic conditions.

Through reductions in aerodynamic drag and vehicle spacing, CTPS offers the potential to improve fuel economy, emissions, traffic flow, and road capacity by employing wireless communications and automation to create a convoy or ‘platoon’ of multiple trucks following in close formation. The technologies employed by CTPS also have potential benefits for drivers and for increasing road safety.

“Platooning is an important step towards autonomous vehicles and to realizing the potential to reduce fuel consumption, eliminate highway congestion and improve safety,” said Yves Provencher, director, market and business development of PIT Group. “This year’s testing program will provide a valuable understanding of the real savings potential of platooning. We are pleased to contribute our ten years of testing expertise to assist in this valuable industry research effort.”

For information about attending the CTPS demonstration, contact karine.seguin@fpinnovations.ca.

THE NACV SHOW IN ATLANTA is coming ever closer. The inaugural North American Commercial Vehicle show will run September 25-28 at the Georgia World Congress Center.

It’s a new concept for North America, though it’s actually inspired by and to some large extent modeled after the huge IAA show in Hannover, Germany. The idea is to bring the entire commercial vehicle industry together with fleet decision makers and influencers. This is not a show aimed at drivers and owner-operators.

All leading truck and trailer manufacturers and commercial vehicle parts & components makers and suppliers will be there, including many from Europe. The show’s exhibit space is sold out.

Things get underway on Monday, September 25 for attendees who have received an invitation from one of the show’s exhibitors. It’s then open to all fleet decision makers from Tuesday the 26th to Thursday the 28th.

The show is organized and produced jointly by Hannover Fairs USA (the American arm of the outfit that puts on the IAA extravaganza) and Newcom Media USA, which is a subsidiary of the company I helped launch way back in 1987. We also run the Truck World and Expocam shows in Canada.

You can register for the show here, and find hotel accommodations here.

THIS NEWSLETTER IS PUBLISHED every two weeks. For the most part it’s a heads-up notice about what’s going on with trucking technology. I also write here about interesting products that may not have had the ‘air play’ they deserved within the last few months, and maybe about issues that warrant attention in my occasionally humble opinion.

I should remind you that, with the odd exception, I don’t endorse any of the products I write about in this e-newsletter, nor do I have the resources to test them except on rare occasions. What you’re getting is reasonably well educated opinion based on more than 38 years in trucking.

If you have comments of whatever sort about The Lockwood Report, or maybe you’ve tried a gizmo I should know about, please contact me at rolf@newcom.ca